WELCOME TO THE POLICE STATE 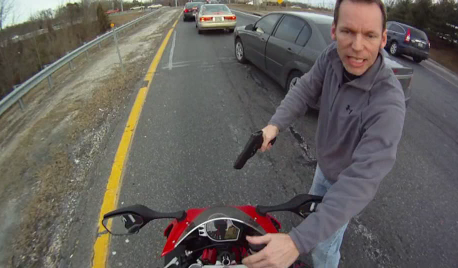 By THE WASHINGTON TIMES

Police in Maryland are in a tiff over an unflattering YouTube video, and prosecutors are working overtime to suppress it. Harford County prosecutors have filed felony charges against 25-year-old motorcyclist Anthony Graber, who taped a traffic stop in March and shared it on the popular website.

Mr. Graber was stopped by police after he made a high-speed trip down Interstate 95 with a video camera mounted on his helmet. Had the officers involved issued a simple speeding ticket and provided a stern roadside counseling session, the matter would have ended there. As seen by nearly a quarter-million viewers online, however, Maryland State Trooper Joseph David Uhler had other ideas. Clad in jeans, sneakers and a grey pullover, Trooper Uhler jumped out of his unmarked Chevy, gun drawn, yelling for Mr. Graber to "get off the motorcycle" - almost forgetting to identify himself as a peace officer. While drawing a deadly weapon over a minor traffic infraction may seem a bit extreme, Trooper Uhler kept it pointed at the ground with his finger off the trigger. The decision was made in the heat of the moment.

The truly outrageous conduct happened days later, after Trooper Uhler was "made aware" of the YouTube video and the negative comments from the public. State police responded with a dawn raid on Mr. Graber's home, confiscating all computers, hard drives and video equipment from the residence. Mr. Graber was charged with three counts of felony wiretapping because he had failed to obtain permission to tape his own arrest.

Maryland's wiretapping statute, intended to protect telephone conversations from eavesdroppers, requires consent from all parties to a private conversation. For the law to apply to a traffic stop, the officer working on a public highway would have to assert that he had an "expectation of privacy." That would be a rather absurd position to hold in a state that uses speed cameras on its interstate highways to record and ticket passing motorists without their permission.

Mr. Graber is being represented by a legal team assembled by the Maryland branch of the American Civil Liberties Union. In an interview with The Washington Times, staff attorney David Rocah expressed concern over the implications of the case. "To use a statute designed to protect people's privacy - including significantly their privacy from government intrusion - as a sword to suppress the truth about official behavior is really turning the statute on its head."

The sword in question is particularly heavy in this case, as Mr. Graber faces up to 16 years in jail. Prosecutors went out of their way to include a charge based on an obscure 2006 law imposing sanctions on anyone who commits a crime with the intent to film it. The wiretap counts include a charge for the possession and use of a "surreptitious" wiretap device - although it is unclear how a large camera mounted on top of a helmet could be considered hidden.

While Mr. Graber is fortunate to have pro-bono legal assistance, it is troubling that police and prosecutors have the ability to lob such serious charges against citizens for exposing questionable official conduct to public scrutiny. The legislature should strip prosecutors of this authority by clarifying that the public has the right to use video to hold public servants accountable for their official conduct.

The Washington Times, LLC.
Posted by Leo Rugiens at 8:16 PM