IS OBAMA A SNAKEBIT PRESIDENT ? 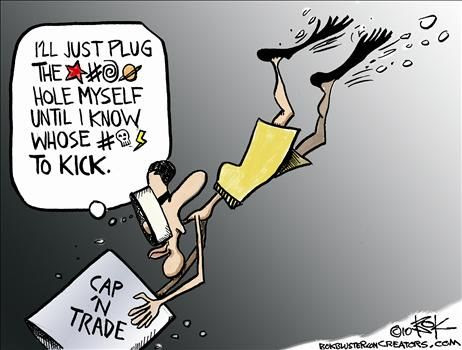 The president is starting to look snakebit.

It wasn't Mr. Carter's fault that the American diplomats were taken hostage in Tehran,
but he handled it badly, and suffered. He defied the rule of the King in "Pippin," the Broadway show of Carter's era, who spoke of "the rule that every general knows by heart, that it's smarter to be lucky than it's lucky to be smart."

Mr. Carter's opposite was Bill Clinton, on whom fortune smiled with eight years of relative peace and a worldwide economic boom. What misfortune Mr. Clinton experienced he mostly created himself. History didn't impose it.

But Mr. Obama is starting to look unlucky, and–file this under Mysteries of Leadership–that is dangerous for him because Americans get nervous when they have a snakebit president. They want presidents on whom the sun shines.

Joe Rago and James Freeman discuss BP's caving to the Obama administration, the president's pivot to cap and trade, and securities litigation reform. It isn't Mr. Obama's fault that an oil rig blew in the Gulf and a gusher resulted. He already had two wars and the great recession. But the lack of adequate federal government response appropriately redounds on him.

In a Wall Street Journal investigation published Thursday, reporters Jeffrey Ball and Jonathan Weisman wrote the federal government at first moved quickly, but soon "faltered." "The federal government, which under the law is in charge of fighting large spills, had to make things up as it went along." It hadn't anticipated a spill this big.

The first weekend in May, when water was rough, contractors hired by BP to lay boom "mostly stayed ashore," according to a local official. "Shrimpers took matters into their own hands, laying 18,000 feet of boom," compared to about 4,000 feet by BP's contractors.

The administration's failure to take impressive action after the spill dinged its reputation for competence. The president's failure to turn things around Tuesday night with a speech damaged his reputation as a man whose rhetorical powers are such that he can turn things around with a speech. He lessened his own mystique. Reaction among his usual supporters was, in the words of Time's Mark Halperin, "fierce, unforeseen disappointment." Dan Froomkin of the Huffington Post called the speech "profoundly underwhelming," a "feeble call to action." Former Clinton Labor Secretary Robert Reich called the speech "vapid." Lynn Sweet of the Chicago Sun-Times said the president looked "awkward and robotic." MSNBC's Keith Olbermann famously said "It was a great speech if you were on another planet for the last 57 days." Chris Matthews scored "a lot of meritocracy, a lot of blue ribbon talk." Mr. Olbermann, on Mr. Obama's well-written peroration: "It's nice but, again, how? Where was the 'how' in this speech when the nation is crying out for 'how'?"
The right didn't like the speech either.
As for the center, Nielsen reported that 32 million people watched the speech, as compared to 48 million viewers that watched the State of the Union. Ronald Reagan once said you should never confuse the reviews with the box office. This was the box office voting with its clickers.
No reason to join the pile on, but some small points. Two growing weaknesses showed up in small phrases. The president said he had consulted among others "experts in academia" on what to do about the calamity. This while noting, again, that his energy secretary has a Nobel Prize. There is a growing meme that Mr. Obama is too impressed by credentialism, by the meritocracy, by those who hold forth in the faculty lounge, and too strongly identifies with them. He should be more impressed by those with real-world experience. It was the "small people" in the shrimp boats who laid the boom.
And when speaking of why proper precautions and safety measures were not in place, the president sternly declared, "I want to know why." But two months in he should know. And he should be telling us. Such empty sternness is . . . empty.
Throughout the speech the president gestured showily, distractingly, with his hands. Politicians do this now because they're told by media specialists that it helps them look natural. They don't look natural, they look like Ann Bancroft gesticulating to Patty Duke in "The Miracle Worker."
The president could move his hands because he was not holding a hard copy of his speech. Normally presidents have had a printed copy of the speech in their hands or on the desk, in case the teleprompter freezes or fails. Mr. Obama's desk was shiny and empty. A White House aide says the director of Oval Office operations had a hard copy just off camera, and was following along as the president spoke so that if the prompter broke he'd be able to give it to the president at the spot he left off.
But that would look a little startling, an arm suddenly darting into the frame to hand the president a script. And the pages could fall. If one were in the mood for a cheap metaphor one would say this is an example of the White House's tendency not to anticipate trouble.
There is still a sense about Mr. Obama that he needs George W. Bush in order to give his presidency full shape and meaning. In this he is like Jimmy Carter, who needed Richard Nixon, or rather the Watergate scandal, which made him president. Mr. Carter needed Richard Nixon standing in the corner looking like he'd spent the night sleeping in his suit as it hangs in the closet. The image is from Joe McGinnis's "The Selling of the President, 1968." Mr. Carter needed to be able to point at Nixon and say, "I'm not him. He dirty, me clean. You hate him, like me." Carter's presidency was given coherence and meaning by Nixon, Watergate, and without it that presidency seemed formless. Mr. Obama, in the same way, needs Mr. Bush standing in the corner like Boo Radley, saying "Let's invade something!" But Mr. Bush is wisely back home in Texas finishing a book, and the president never sounds weaker than when he suggests his predicament is all his predecessor's fault.
Mr. Obama needs Mr. Bush in the corner and doesn't have him. That's part of why he looks so alone out there.
And seems so snakebit, so at the mercy of forces. When you're snakebit you get some sympathy, and some will come. With all the president's woe there will be some counter-reaction among commentators, journalists and others. There will likely be among the Democratic leadership, too. "Love him or not he's what we've got, and he's what we have for the next two years. Help the guy, cool the criticism, punch back for him." But it's also true that among Democrats—and others—when the talk turns to the presidency it turns more and more to Hillary Clinton. "We may have made a mistake. She would have been better." Sooner or later the secretary of state is going to come under fairly consistent pressure to begin to consider 2012. A hunch: She won't really want to. Because she has enjoyed being loyal. She didn't only prove to others she could be loyal, a team player. She proved it to herself. And it has only added to her luster.
As for the president, the great question is what you do when you start to feel snakebit. Maybe he'll start to doubt his own moves and instincts. Maybe not. Jimmy Carter didn't. He fought hard for re-election in 1980, and until near the end thought he'd win. He trusted the American people, and in an odd way he trusted his luck.