"THE PUBLIC EDUCATION SYSTEM IS AT A CROSSROADS"

A new documentary by a 27-year-old filmmaker could change the national debate about public education.

'What's funny," says Madeleine Sackler, "is that I'm not really a political person." Yet the petite 27-year-old is the force behind "The Lottery"—an explosive new documentary about the battle over the future of public education opening nationwide this Tuesday.

In the spring of 2008, Ms. Sackler, then a freelance film editor, caught a segment on the local news about New York's biggest lottery. It wasn't the Powerball. It was a chance for 475 lucky kids to get into one of the city's best charter schools (publicly funded schools that aren't subject to union rules).

"I was blown away by the number of parents that were there," Ms. Sackler tells me over coffee on Manhattan's Upper West Side, recalling the thousands of people packed into the Harlem Armory that day for the drawing. "I wanted to know why so many parents were entering their kids into the lottery and what it would mean for them." And so Ms. Sackler did what any aspiring filmmaker would do: She grabbed her camera.

Her initial aim was simple. "Going into the film I was excited just to tell a story," she says. "A vérité film, a really beautiful, independent story about four families that you wouldn't know otherwise" in the months leading up to the lottery for the Harlem Success Academy.

But on the way to making the film she imagined, she "stumbled on this political mayhem—really like a turf war about the future of public education." Or more accurately, she happened upon a raucous protest outside of a failing public school in which Harlem Success, already filled to capacity, had requested space. 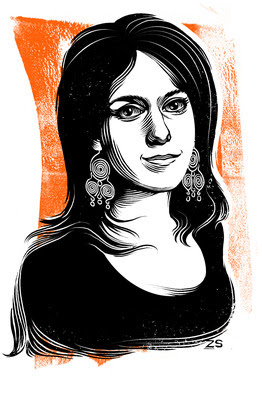 "We drove by that protest," Ms. Sackler recalls. "We were on our way to another interview and we jumped out of the van and started filming." There she discovered that the majority of those protesting the proliferation of charter schools were not even from the neighborhood. They'd come from the Bronx and Queens.

"They all said 'We're not allowed to talk to you. We're just here to support the parents.'" But there were only two parents there, says Ms. Sackler, and both were members of Acorn. And so, "after not a lot of digging," she discovered that the United Federation of Teachers (UFT) had paid Acorn, the controversial community organizing group, "half a million dollars for the year." (It cost less to make the film.)

Finding out that the teachers union had hired a rent-a-mob to protest on its behalf was "the turn for us in the process." That story—of self-interested adults trying to deny poor parents choice for their children—provided an answer to Ms. Sackler's fundamental question: "If there are these high-performing schools that are closing the achievement gap, why aren't there more of them?"

The reason is what Eva Moskowitz, founder of the Harlem Success Academy network and a key character in the film, calls the "union-political-educational complex." That's a fancy term for the web of unions and politicians who defend the status quo in order to protect their jobs.

In the course of making "The Lottery," Ms. Sackler got to know the nature of that coalition intimately. "On day one, of course, I was very interested in all sides. I was in no way affiliated." From the beginning, she requested meetings with then UFT President Randi Weingarten, or anyone representing the union position. They refused. Harlem's public schools weren't much more accessible. "It was easier to film in a maximum security prison"—something Ms. Sackler did to interview a parent—"than it was to film in a traditional public school."

Viewers still get a sense of the union's position, but it comes from the mouths of some unsavory New York pols. Take, for example, a scene from the film featuring a City Council hearing on charter school expansion. "The UFT was exposed at this particular City Council hearing," she says, "because they were caught giving out scripted cue cards with specific questions for City Council members to ask charter representatives in the city." Unlike many of the politicians, who came and went from the chamber during the seven-hour hearing, Ms. Sackler remained. And she watched as the scripted questions were repeated and repeated and repeated.

"It was just a colossal waste of time," she says. "And it was incredibly frustrating as a citizen to be sitting there. Out of all the things they could be talking about—like the fact . . . that at the majority of schools in Harlem kids aren't passing the state exams—instead of talking about this stuff, they were cycling through those questions."'

Evasion is one tactic. So is propagating myths about Harlem Success—that it only succeeds because it has smaller class sizes; or that its children's test scores are so high because it gets more money. The truth is that the school gets superior results with the same or slightly bigger class sizes and less state money per pupil. In 2009, 95% of third-graders at Harlem Success passed the state's English Language Arts exam. Only 51% of third graders in P.S. 149, the traditional public school that shares the same building, did. That same year, Harlem Success was No. 1 in math out of 3,500 public schools in New York State.

The unions and the politicians also play on Harlemites' fears by alleging that charters divide the community and are a "tool for gentrification." This canard only holds up if you think uniforms and longer school days are a sign of cultural imperialism.

In a particularly cringe-inducing exchange captured on film, Councilwoman Maria Del Carmen Arroyo of the Bronx accuses Ms. Moskowitz of lying when the charter school leader talks about being a parent in Harlem (the neighborhood where she grew up, where she attended public school, and where she is raising her children, who attend the charter). The subtext, of course, is that Ms. Moskowitz is white and well-off.

This is par for the course, Ms. Sackler tells me. Harlem Success Academy is "protested more than any other charter school in this city—and there are some bad charter schools. So you would wonder why that would be."

Those wondering why need look no further than 2002, the year that Ms. Moskowitz, then a Democratic City Council member, became chair of the city's education committee. "She held a lot of hearings on the union contract—and the custodian contract, and the principal contract," says Ms. Sackler. New Yorkers learned that the teachers' contract is hundreds of pages long and littered with rules mandating every detail of how teachers will spend their workday.

The union was not pleased. So when Evil Moskowitz, as she was dubbed, ran for Manhattan borough president in 2005, the UFT campaigned hard for her opponent, Scott Stringer, who won.

Ms. Moskowitz, who confirmed in an interview that she has mayoral aspirations, was surely disappointed by the defeat. But her loss was Harlemites' gain. As one mother says of Ms. Moskowitz at a town hall meeting in Harlem, "She's our Obama. She brought change to our kids, okay?"

Some parents in the film do not know what exactly a charter school is. And the truth, as the film implicitly points out, is that such technical designations don't much matter. What these parents know is that they desperately want their children to have the best possible education, and to have opportunities that they themselves could only imagine. Winning a spot in Harlem Success Academy—or another high-performing school—is critical to reaching that goal.

"Going into it one of the goals was to expose one myth . . . which is that some parents don't care," says Ms. Sackler. "The reason for telling the parents' stories is that I never thought that was true."

In "The Lottery," we are introduced to Eric Roachford, who, like his father, works as a bus driver. As an MTA employee, Mr. Roachford is a "union man, but at the same time, we want our child to learn." He believes that going to college "is the difference between a job and a career." That's why his wife, Shawna, has taken time off to home school their two young sons.

Nadiyah Horne, a single mother who is also deaf, is raising 5-year-old Ammenah. "If others don't like this school, I don't care," she says, using sign language. "I want my child to get the best education." So does Emil Yoanson, who is raising his son Christian alone, and who prays to God that his name will be drawn.

"Being a single mom is very, very hard" says Laurie Brown-Goodwine, who has applied to several charters for her son, Gregory Jr. Her husband is serving 25 years to life in prison for a third-strike felony.

These are parents who don't have the means to move to a richer neighborhood with better public schools, so instead they have to rely on luck. When demand for a charter school exceeds supply, the random drawing is required by law. Some schools inform parents by mail, but Harlem Success holds a public lottery. "Harlem Success is very explicit about why they do it," Ms. Sackler says. They want to show demand. "I've heard them say to parents 'We hope that you'll come and show that this is something that you want. Because if you don't, we're not going to get more schools.'"

In the film, Newark, N.J., Mayor Cory Booker says he can't go to lotteries anymore because they break his heart. "A child's destiny should not be determined on the pull of a draw." Nothing drives home this point more than seeing the parents and kids, perched at the edge of their chairs, hoping their names flash on the big screen.

Critics of "The Lottery" will probably contend that the absence of anti-charter voices hurts its credibility. But the scene Thursday night at Harlem's legendary Apollo Theater, where the film was screened, underscored the film's fundamental point about parents' apolitical dedication to educating their kids. After the documentary played, the film's parents took to the stage to answer questions from the theater's packed audience. Their message: Research options early and ignore labels—all that matters is the school's results. It's the same message, the parents said, that they now regularly share in neighborhood grocery markets and libraries.

Harlem Success, meanwhile, is trying to keep pace with parents' demand. Right now the network has four schools, but in 10 years it hopes to operate 40, with some 20,000 kids enrolled. Even then, there would be more work ahead: This year, some 40,000 New York kids will end up on charter school waiting lists.

"The public education system is at a crossroads," Ms. Sackler says. "Do we want to go back to the time when children are forced to attend their district school no matter how underperforming it is? Or do we want to let parents choose what's best for their kids and provide a lot of options? Sometimes those options might fail. But . . . I don't see how you could choose to settle for what we've been doing for half a century when it's been systemically screwing over the same kids—over and over and over."

Ms. Weiss is an assistant editorial features editor at the Journal.

Printed in The Wall Street Journal, page A13
Posted by Leo Rugiens at 6:33 AM