JUST HOW UN-AMERICAN IS NANCY PELOSI ? WHERE IS THE HUAC WHEN WE NEED IT? 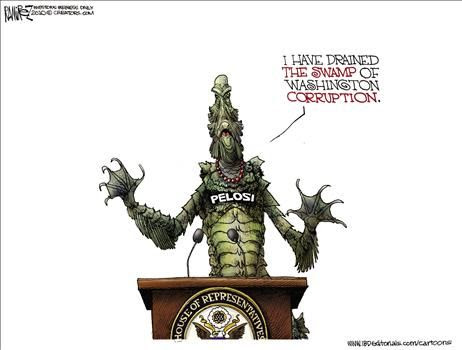 We were only kidding last week when we headlined an item "Bring Back HUAC." The reference was to the House Committee on Un-American Activities, disbanded in 1975, and we were poking fun at the tendency of today's liberals to label anyone who disagrees with them "un-American." In the case of the Ground Zero mosque, that would mean the vast majority of Americans are un-American.

Speaker Nancy Pelosi, however, seems to have taken our little joke seriously. Politico reports that "Pelosi on Tuesday said she supports an investigation of groups opposing the building of a mosque near ground zero in New York":

Pelosi told San Francisco's KCBS radio that "there is no question there is a concerted effort to make this a political issue by some."

"I join those who have called for looking into how is this opposition to the mosque being funded," she said. "How is this being ginned up?"

It was a bit unclear what she was referring to, and now her office sends over a statement from her clarifying what she meant and sort of standing by what she said:

"The freedom of religion is a Constitutional right. Where a place of worship is located is a local decision.

"I support the statement made by the Interfaith Alliance that 'We agree with the ADL that there is a need for transparency about who is funding the effort to build this Islamic center. At the same time, we should also ask who is funding the attacks against the construction of the center.' . . ."

Sargent, who has a preternatural ability to find clarity amid mud, adds: "Pelosi doesn't seem to be calling for some kind of government investigation into the mosque's critics, as thrilling as that would be to some on the right." Nothing to see here, just move along.

But wait. What is this about "a need for transparency about who is funding the effort to build this Islamic center"? Pelosi agrees with Rick Lazio, a Republican candidate for governor of New York, who last month called on his Democratic rival, Attorney General Andrew Cuomo, to investigate the mosque's funding. The Associated Press reported last month on the reaction to Lazio's call for transparency:

New York Mayor Michael Bloomberg says it would be un-American to investigate a mosque that is planned for construction near where the World Trade Center once stood.

Perhaps when Pelosi reconstitutes HUAC, its first order of business will be to look into Bloomberg's allegation that the speaker of the House is engaging in un-American activities.

The Perils of Contrarianism
Why is it a good idea to build a fancy new mosque just two blocks from the site of an act of mass murder that was committed in the name of Islam? Ask this question, and the response is almost certain to be some combination of verbal abuse ("Bigot! Un-American!") and airy abstractions about freedom of religion. No one seems to have a real answer to the question.

It is hard to imagine that anything has gone unsaid about the so-called Ground Zero mosque, but an important point seems to be missing.

The mosque should be built precisely because we don't like the idea very much.

This provocative, contrarian lead turns out to be a bait-and-switch. The next sentence reads, "We don't need constitutional protections to be agreeable, after all." She's just taking the airy-abstraction approach, à la President Obama, reciting First Amendment pieties without really thinking her argument through, and condescendingly dismissing critics as motivated by "emotion, which isn't necessarily bad, but it bears watching."

But it's worse than that. Here are her final two paragraphs:

Nobody ever said freedom would be easy. We are challenged every day to reconcile what is allowable and what is acceptable. Compromise, though sometimes maddening, is part of the bargain. We let the Ku Klux Klan march, not because we agree with them but because they have a right to display their hideous ignorance.

Ultimately, when sensitivity becomes a cudgel against lawful expressions of speech or religious belief--or disbelief--we all lose.

This passage starts and ends with clichés, but what comes in between--the last two sentences of the penultimate paragraph--is an intellectual disaster scene.

"Compromise, though sometimes maddening, is part of the bargain," Parker writes. Who could possibly disagree? That turns out not to be a rhetorical question, and New York's WNBC-TV answers it:

The developers of an Islamic cultural center that would include a mosque near Ground Zero have rejected Gov. David Paterson's offer to help them find a different site.

But, Paterson said the dialogue would have been useful as the project has ignited nationwide debate over freedom of religion and anger over the Sept. 11 terrorist attacks. "Having said that, how much more foresighted would it have been if the Imam who is the developer of the project had been willing to hear what we are actually talking about?"

Then Parker comes forth with this whopper: "We let the Ku Klux Klan march, not because we agree with them but because they have a right to display their hideous ignorance."

There are two problems with the analogy. First, it fails to distinguish between the right to do something and the merits of doing it. Recast Parker's second paragraph to refer to the analogy, and the difficulty immediately becomes clear: "The Klan should march precisely because we don't like the idea very much." Government has no business preventing the Klan from marching, so that if the Klan marches, citizens are obliged to tolerate it. It does not follow that the Klan should march or that those who lawfully object to its doing so are wrong.

Second, Kathleen Parker is drawing a parallel between the mosque's developers and the Ku Klux Klan! Was she so caught up in her clever little display of contrarianism that it failed to occur to her that such a comparison is invidious and inflammatory?

Exhortation Isn't Censorship
Yesterday we argued that members of the pro-mosque left are at best inconsistent in applying their principles. As an example, we contrasted their vilification of Ground Zero mosque critics as "un-American" with their silence over or even agreement with "social activists and civil rights leaders" who object to a Tea Party rally at the Lincoln Memorial on the anniversary of Martin Luther King's "I have a dream speech."

If Al Sharpton marches vs. Glenn Beck, there is no state action or power while if President Obama says or does something there would/could be the required state action or power, so Sharpton vs. Beck would not have any First Amendment consequences (that I know of). That is an important difference that often gets overlooked.

Let's consider another example, then, from blogger and constitutional scholar Eugene Volokh:

The Public Advocate for the City of New York (Bill de Blasio) has a site that lists major (nonmedia) corporations' stands on using corporate money to speak about candidates for political office. Then, for corporations that are so speaking, the site lists contact information with the line "Demand that corporations stop taking advantage of Citizens United: Call [corporation name] at [phone number]"(or gives an e-mail address).

For corporations that aren't so speaking but haven't pledged not to engage in such speech, the site uses the line "Hold [corporation name] Accountable: Call [corporation name] at [phone number]." The site does not list any such information about unions, who were also freed to speak by Citizens United.

Here we have a politician using his governmental position to drum up opposition to private parties' exercising their right to free speech. Is there a constitutional problem here? The libertarian-leaning Volokh argues not: "I don't think there's any constitutional barrier to the government's trying to put public pressure on certain organizations, in order to keep them from speaking about politicians. But it still struck me as unusual, and worth noting."

That sounds right to us. The First Amendment begins "Congress shall make no law . . .," a prohibition that over the years has been interpreted to apply as well to administrative and judicial actions and to actions by state and local officials. But it doesn't say "Congressmen shall make no statement . . ."

This ought to refute any notion that the First Amendment somehow obliged President Obama to vote "present" on the mosque. The Constitution constrains him from acting coercively, not from showing leadership.