WHO ARE THE GREATEST PERSECUTORS OF THE PALESTINIANS? NOT ISRAEL, IT IS THE REST OF THE ARAB WORLD 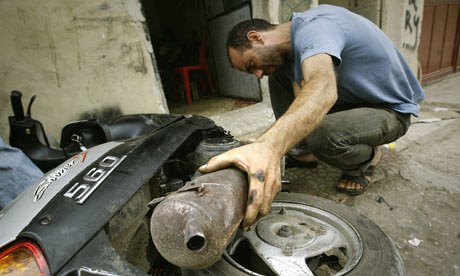 As Israelis and Palestinians prepare to visit Washington next week to begin direct peace talks, it's worth recalling what refugees the Palestinians are—in Arab countries.

Last week, Lebanon's parliament amended a clause in a 1946 law that had been used to bar the 400,000 Palestinians living in the country from taking any but the most menial jobs. "I was born in Lebanon and I have never known Palestine," the AP quoted one 45-year-old Palestinian who works as a cab driver. "We want to live like Lebanese. We are human beings and we need civil rights."

The dirty little secret of the Arab world is that it has consistently treated Palestinians living in its midst with contempt and often violence. In 1970, Jordan expelled thousands of Palestinian militants after Yasser Arafat attempted a coup against King Hussein. In 1991, Kuwait expelled some 400,000 Palestinians working in the country as punishment for Arafat's support for Saddam Hussein in the first Gulf War.

For six decades, Palestinians have been forced by Arab governments to live in often squalid conditions so that they could serve as propaganda tools against Israel, even as millions of refugees elsewhere have been repatriated and absorbed by their host countries. This month's vote still falls short of giving Palestinian Lebanese the rights they deserve, including citizenship. But it's a reminder of the cynicism of so much Arab pro-Palestinian propaganda, and the credulity of those who fall for it.

Some employment rights have been granted to Palestinian refugees, but they will still be unable to work in many key professions, no matter what their qualifications

Standing in the narrow streets of Shatila refugee camp, south Beirut, as battered mopeds speed past and electrical wires dangle messily overhead, seven-year-old Hasan Hameid is clear about what he wants to do when he grows up: "I want to be a doctor and to treat sick people."

But despite Lebanon's proclaimed sympathy with the Palestinian people, Lebanese law will prevent him fulfilling his dream with a long list of professions and ownership rights denied to the country's hundreds of thousands of Palestinians. Generations of Palestinians remain mired in poverty in cramped, squalid refugee camps, and even those with an education cannot own a house or land, or become lawyers, engineers or, unfortunately for Hasan, doctors. Last week a shift in the law granted some employment rights and removed restrictions, addressing decades-old discriminatory laws that banned them from working in all but the most menial jobs.

Palestinians will be able to apply for free work permits, pay into a pension fund, and claim for work-related accidents – but there is no guarantee that employers will hire them, or how the work permits will be allocated, and they will still be unable to work in a number of key professions. Law, medicine and engineering require that a person join the industry syndicate before they can be employed. But a policy of reciprocity means that "stateless" Palestinians cannot be employed like other foreigners who belong to recognised states that can offer similar benefits to the Lebanese.

The law was greeted with scepticism by many. "I fix telephones… Thirteen years of study so I can fix telephones," says 39-year-old Ghassan dejectedly. He studied electrical engineering, receiving his doctorate in Lebanon two months ago. He is among the very few that have gained qualifications despite a lack of funding for education for Palestinians. But even with the new law in place, Ghassan will not be employed in engineering as long as he stays in Lebanon. He said: "Here in Lebanon there is no law, there is no government and nothing is happening. Forget the whole [law] – what's written and what you hear and what you see, forget it."

Ghassan has learned to be pessimistic. After decades of debate on the status and rights of Palestinians in Lebanon, and despite the best efforts of the UN agency for Palestinian refugees (UNRWA), they remain severely impoverished and marginalised. Of the estimated 400,000 Palestinians living in Lebanon – most of them the descendants of those who fled or were forced from their homes during the war following the creation of Israel in 1948, and later in the 1967 Middle East war – more than half live in one of the 12 UN-run refugee camps scattered around the country. According to UNRWA figures, close to 60% of the Palestinians in Lebanon are unemployed. The Palestinian Najdeh Foundation estimates only 7% of working Palestinians have fixed contracts, 90% of which work with UNRWA.

Shatila refugee camp in west Beirut is much the same as the 11 others in Lebanon. Overcrowded rooms in concrete buildings suffer from poor plumbing and intermittent electricity; youths stand around smoking and tradesmen sell their goods on a dusty street through the camp. The Palestinian community was often directly involved in the conflicts that have plagued Lebanon, a contributing factor to the conditions in which they now live. But many point to labour laws that discriminate against Palestinians as the primary reason for their poverty.

The debate over rights for Palestinian refugees has divided lawmakers here for years. Lebanon's Christian parties constitute the largest opposition to the new law – and indeed any law that aims to give Palestinians in the country more rights – based on a fear that any such move would constitute the first steps towards naturalisation, or tawteen. Tawteen is a major concern for Lebanon's diminishing Christian community, who fear Palestinian integration would dramatically alter the demographics in favour of an already much larger Muslim majority. Palestinians deny they seek citizenship in Lebanon, and hold the right to return to the land of their ancestors as a sacred right.

Compromises over the draft law – which included Palestinians' right to own property – mean any tangible improvement of living conditions is unlikely. Nadim Houry, Beirut director of Human Rights Watch, said: "This law is a positive but insufficient step in fixing some of the underlying problems of discrimination in Lebanese law. This has to be followed up in terms of a real dialogue with the syndicates so they open their ranks to Palestinians. I think there has to be a real labour policy to encourage hiring Palestinians."

Hasan's mother, Imm Mohammed, said: "My other son is studying to be an engineer at the Arab University… and when he's finished what's he going to do? I said to him, 'What's the point?' He said, 'I want to be an engineer – you don't know what's going to happen in the future.'"