THE WTC MOSQUE IS "A DELIBERATE PROVOCATION TO THUMB OUR NOSES AT THE INFIDEL." 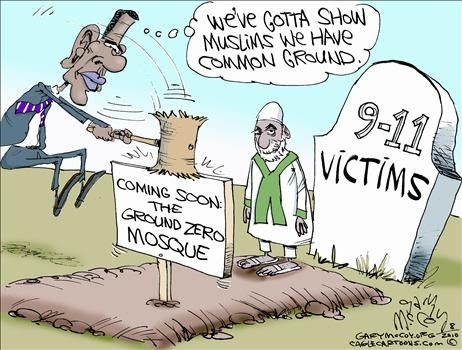 During the past month, the evening news programs on ABC, NBC and CBS have featured quotes from Muslim Ground Zero supporters nine times, many of whom described opposition to the mosque as “bigoted” or “Islamophobic.” In contrast, from July 22 to Aug. 22 only one evening show gave air time to a Muslim who is opposed to the Ground Zero project. Critics of the mosque such as first Muslim Miss USA, Dr. Zhudi Jasser and the director of Al-Arabiya were ignored by the news shows.

On Aug. 16, ABC World News quoted Council on American-Islamic Relations spokesman Ibrahim Cooper, who said that “Even after 9/11, there was a reservoir of good will. We had people bringing flowers to mosques that were vandalized nationwide, but I've really never seen the level of Islamophobia that we're experiencing today.”

Only one Muslim-American who opposed the mosque was quoted on any of the shows. “To us, it is the grave site of our loved ones …We are saying please not here. Nowhere as a part of your religious freedom does it guarantee you a location,” said Neda Bolourchi on CBS Evening News on Aug. 22. Bolourchi lost her mother in the Sept. 11 attacks, on. Bolourchi had previously written about her opposition to the mosque in The Washington Post, yet only CBS managed to find her for an interview.

But there are many prominent Muslims besides Bolourchi who have spoken out against the Ground Zero mosque, saying that the location is unnecessarily insensitive to the Sept. 11 victims and their families.

For example, if the network shows are looking for a little sex-appeal to spice up their programming, then they only need to turn to the stunning Rima Fakih, the first Muslim Miss USA, who has criticized the location of the planned mosque.

“I totally agree with President Obama with the statement on Constitutional rights of freedom of religion," Fakih told Inside Edition on Aug. 16. "I also agree that it shouldn't be so close to the World Trade Center. We should be more concerned with the tragedy than religion.”

“The fact we Muslims know the idea behind the Ground Zero mosque is meant to be a deliberate provocation to thumb our noses at the infidel,” wrote Raza and Fatah on Aug. 17. “The proposal has been made in bad faith and in Islamic parlance, such an act is referred to as ‘Fitna,’ meaning ‘mischief-making’ that is clearly forbidden in the Koran.”

Raza also appeared on Bill O’Reilly’s show on Fox News. “How does building a mosque in the very place where Muslims murdered so many other Americans … create any kind of respect?” asked Raza on the Aug. 10 show. “As a Muslim, I read in my holy book the Koran that we should be very sensitive toward people of other faiths, especially when we are living in lands that are not Muslim lands.”

Dr. Zhudi Jasser, a prominent moderate Muslim and president of the American Islamic Forum for Democracy, told the Daily Caller the he opposed the Ground Zero mosque project on Aug. 18.

“This is not a humble Islamic statement,” Dr. Jasser said. “A mosque such as this is actually a political structure that casts a shadow over a cemetery, over hallowed ground. 9/11 was the beginning of a kinetic war, it is not an opportunity for cultural exchange. It was the beginning of a conflict with those who want to destroy our way of life.”

Others who have come out against the mosque’s proximity to the World Trade Center site include Abd Al-Rahman Al-Rashid – the director of the popular Arab-language news station Al-Arabiya – and Raymond Ibrahim – the associate director of the Middle East Forum.

“[T]he idea of a mosque right next to a site of destruction is not at all an intelligent one,” wrote Al-Arabiya director Al-Rashid in an Aug. 16 column in a London daily. “The last thing Muslims want today is to build a religious center that provokes others, or a symbolic mosque that people will visit as a [kind of] museum next to a cemetery.”

In a column for Pajamas Media, Middle East Forum director Ibrahim wrote that, “[F]rom negative media attention to subliminal associations with the 9/11 strikes, the ‘9/11 mosque’ has great potential to backfire on Islam.” Ibrahim has also written other critiques of the project.

Will the network news stations begin inviting moderate Muslims who oppose the Ground Zero mosque onto their shows? We can only hope – but then again, that might demolish the talking point that criticism of the mosque is based on “Islamophobia.”

Some network news programs have recently begun promoting the idea that critics of the Ground Zero mosque are indifferent to the Constitution and potentially bigoted.

“New York's mayor actually came out pretty clearly on this, as well. And a lot of people are applauding him for his political strength because there are many who don’t care about the Constitution, just want to jump on what will get to people emotionally on this and connect with them,” said Mika Brzezinski on NBC’s “Today Show” on Aug. 14.

On ABC’s “Good Morning America” on Aug. 16, Dan Harris said that, “Muslim activists say they're starting to get more worried about what they call a rising tide of Islamophobia in the country, with increasingly venomous fights over proposed new mosques in places like California, Wisconsin and Tennessee.”