FOR THE LEFT, PROTECTING MUSLIMS FROM INSULT IS A HIGHER PRIORITY THAN PROTECTING WOMEN FROM SEXUAL VIOLENCE


The weathermen at Twitchy.com report that novelist Joyce Carol Oates set off a twit-storm Friday with a pair of tweets about sexual violence in Egypt: The first coyly referred to recently deposed president Mohamed Morsi's Muslim Brotherhood: "Something dispiriting about 'Brotherhood' political parties--wonder what it is." The second was explicit: "Where 99.3% of women report having been sexually harassed & rape is epidemic--Egypt--natural to inquire: what's the predominant religion?"


Oates defended her line of inquiry: " 'Rape culture'; has no relationship to any 'religious culture'--how can this be? Religion has no effect on behavior at all? How possible?" To which Anita Felicelli responded with a tu quoque: "Do you also think that mass gun violence in schools bears a relationship to Christianity?" That turned out to be an illi quoque, for Oates answered: "Yes. There is a Christian Crusade culture. All religions are 'militant.' Secular law needed to restrain them."


Here Oates goes off the rails. While the Crusades were an example militant Christianity, there is no factual basis for asserting a connection between Christianity and "mass gun violence in schools," whether of the psycho-killer or the street-thug kind, in 21st-century America.


As for Egypt, it's certainly true that sexual violence is a problem. As NPR reports:

Human Rights Watch reports a sharp rise in sexual assaults here since anti-Morsi protesters took to the streets in record numbers last week. Activists report more than 100 sexual assaults in or near Tahrir Square during the past week alone, many of them gang rapes. . . .

The rights group says the latest attacks follow an all too familiar pattern since mass protests began in 2011: A few men force a girl or woman away from the people she's with; rip off her clothes and assault her. Passersby join in the attacks, which range from groping to gang rapes that can last more than an hour.

"Key players in the current political crisis are using the attacks for political leverage," the report adds. While the Muslim Brotherhood blames the opposition, London's Daily Mail reports that "the assailants operated in a climate of impunity--encouraged by religious zealots within the government who had called female protesters whores and who had blamed rape victims for not staying home. It is even believed that the gangs were paid by the Muslim Brotherhood." 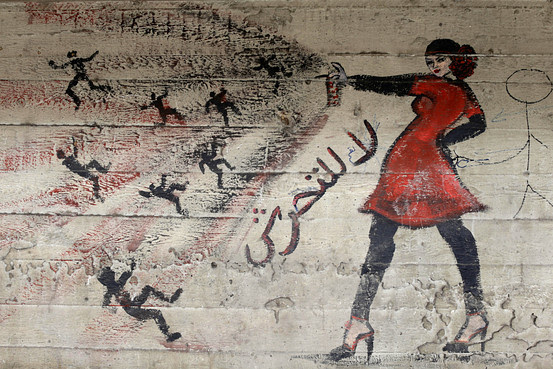 Oates's question, then, is a pertinent one. And "Islamophobia" is no more than a conversation-stopper: one of many politically correct buzzwords that would be listed as synonyms for "shut up" if there were a Gramsci's Thesaurus.


The multiculturalist left is not ecumenical in its taboos. Felicelli and Oates, for instance, were not testing any boundaries when they baselessly linked Christianity to violence in schools. Even for the left, it is a legitimate question whether there was something in the culture of Catholicism or the Catholic Church that led to child-sex-abuse scandals. (That, by the way, would have been a more fitting analogy, though it would have undercut Felicelli's argument and supported Oates's.)
There are a couple of ironies in the Oates kerfuffle. One is that she herself, a lapsed Catholic, has expressed the same sort of loftily indulgent attitude toward Christianity that multiculturalists usually reserve for Islam and other mostly foreign religions. In a 2007 interview with The Humanist, she was asked: "Do you identify as an atheist?" She dodged the question, though she implied that she is one:


I'm not averse to acknowledging it, but as a novelist and a writer, I really don't want to confront and be antagonistic toward people. As soon as you declare that you are an atheist, it's like somebody declaring that he is the son of God; it arouses a lot antagonism. I'm wondering whether it might be better to avoid arousing this antagonism in order to find--not compromise--some common ground. . . .

I'm not sure it's a good idea to wave a red flag and annoy other people because we do have to live with them, even the very antagonistic and messianic fundamentalist Christians in our country.

The other is that "rape culture" is itself a politically correct conversation-stopper. Your humble columnist was accused of promoting it last month, by ThinkProgress.org and RawStory.com among others, because we defended both the rights of the accused and the proposition that women and men are equally accountable for their own actions. The case we wrote about didn't even involve rape but an unproven allegation of a lesser sexual assault.


The slogan "rape culture" is right out of Orwell's "1984": "All words grouping themselves round the concepts of liberty and equality . . . were contained in the single word crimethink." Rape is a crime, and culture is a product of thought: The parallel is perfect.


This column is sufficiently ornery that conversation-stoppers have the opposite of their intended effect on us. But no doubt they do deter a lot of people from speaking or even thinking, because they don't want to be thought of--or to think of themselves--as mean or unenlightened.


Meanwhile, the lesson of the Oates twit-storm seems to be that for today's politically correct left, protecting Muslims from insult is a higher priority than protecting women from sexual violence.