IT IS NORTH CAROLINA'S TURN TO EXPERIENCE MOBOCRACY LIKE AUSTIN, TEXAS AND MADISON, WISCONSIN 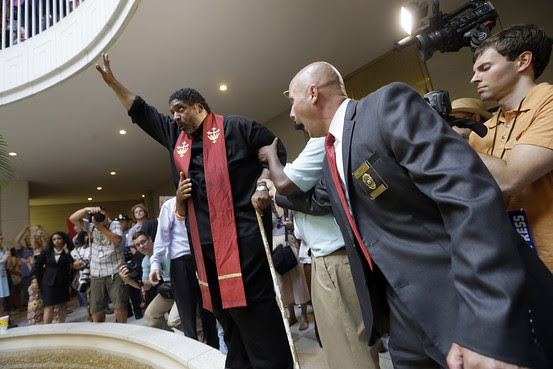 Why Are North Carolina Liberals So @&%*! Angry?

If it's Monday, it must be another protest against tax-cutting Republicans.

The burning heart of liberal activism and indignation this summer can be found, of all places, in the charming capital city of the Tar Heel State. On Monday, for the 11th week in a row, thousands of protesters descended on the copper-domed Capitol denouncing the policies of a Republican Party that for the first time since Reconstruction controls North Carolina's governorship and legislature. Some 800 agitators have been arrested for disrupting the legislature. By all accounts, these "Moral Monday" rallies, though peaceful, are growing in size and volume. 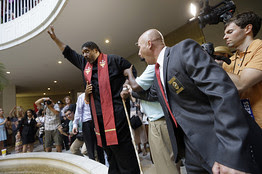 The rallies have caught the eye of the national media, with some referring to Raleigh as the "Madison of the South." Madison, of course, is the famously liberal capital of Wisconsin that turned into a political frying pan in February 2011 when the state's Republican lawmakers reformed union collective-bargaining rules.

Thom Goolsby, an outspoken GOP state senator, has jokingly dismissed the protests in Raleigh as "Moron Mondays" and predicted that they would fade in the weeks ahead. Perhaps, but the stated goal of the organizers is that these rallies evolve into the same kind of political tour de force on the left that the tea party has become on the right. Moral Mondays may be coming soon to a state capital near you.

So what are liberals of all stripes so angry about in North Carolina? I put that question to the organizer of the Moral Monday movement, Rev. William Barber II, a loquacious, likable and politically shrewd preacher and leader of the North Carolina NAACP. (Think Jesse Jackson, but with charm and genuine conviction.) He preaches "civil disobedience" and trains peaceful demonstrators on how to get arrested. He is also a master at political theater.

After a near-five minute sermon about how Republicans have made the state a "crucible of extremism and injustice," it became clear the answer to my question is he and his followers are mad as hell about, well . . . everything. The list of grievances is long but includes unemployment-insurance cuts that took some 70,000 recipients in the state off the rolls, state lawmakers' refusal to sign up for ObamaCare's Medicaid expansion, a proposed voter-ID law, and of course "tax cuts for the rich."
This past Monday marchers were waving signs that read "Justice for Trayvon Martin," "Stop Fracking in North Carolina," and "Vouchers Destroy Public Schools." In recent weeks, demonstrators were out in force demanding abortion rights. On July 2, the state Senate passed a bill requiring health regulations and certified doctors at abortion clinics, a requirement that has been denounced by pro-choice activists as an assault on women. Gov. Pat McCrory has said he would veto that bill, and the state's House of Representatives has since passed a revised bill that will now head back to the Senate.

Mostly, however, these protests are about money. The Civitas Institute, a conservative think tank in North Carolina, recently published an analysis of the financial statements of the left-wing groups sponsoring these rallies, such as the Community Development Initiative and the Institute of Minority Economic Development. It found they have collected about $100 million in state grants, loans and contracts. No wonder they're enraged over GOP lawmakers' attempts to rein in spending.

One common complaint is that the state is passing up free money by rejecting Medicaid expansion. But many financially pinched states—including Georgia, Alabama, Utah and Texas—are doing so, not because they're coldhearted but because while the feds pick up the full tab in the first several years, eventually the states will have to pay even more money into a broken system that is already sapping state budgets.

Unemployment-insurance extensions have also created perverse incentives. North Carolina owes the feds some $2.5 billion for loans to pay extended benefits. The Republicans sensibly asked for a waiver that would keep the extended benefits but cut the size of the monthly checks. The feds refused, so the state has opted for shorter durations of benefits rather than raising the unemployment-insurance tax on employers.

North Carolina state Senate Majority Leader Phil Berger told me last week that "this tax only adds to the cost of hiring workers and thus makes unemployment worse." To their credit, Mr. Berger and his fellow GOP lawmakers have passed a pro-growth plan that will slash the state personal income tax rate to 5.75% from 7.75% by 2015; cut the corporate tax to 5% from 6.9%; and eliminate the state estate tax.

All of this will spur growth and job creation. Yet unions and others on the left pummel the plan as a giveaway to the rich. Rev. Barber and his allies also portray the GOP as a gang that wants to "turn back the clock" on racial justice and fighting poverty.

To his credit, Gov. McCrory hasn't capitulated. He argues that in a state with an 8.8% unemployment rate and falling incomes "my main goal is to make the state more economically competitive. Unlike the protesters, I'm not wedded to the status quo," he told me last month.

That isn't to say Republicans have been saints. Rev. Barber makes a strong case that some of the ballot-access changes Republicans are promoting appear motivated to suppress minority and Democratic turnout. While the proposed voter-ID law is a sensible and popular anti-fraud measure, not allowing early voting on Sundays and taking away dependent tax exemptions from parents if their sons or daughters in college vote outside their hometown unnecessarily inflame minority and youth rage. With his typical rhetorical flare, Rev. Barber calls these "21st century poll taxes."

Rev. Barber and the other "religious progressives" say their goal is a new "southern fusion" that unites every ethnic, religious and interest group promoting modern liberalism to repel the tide of conservative policies on the march, not just in North Carolina, but all across the South. His warning to national liberals is, "If Republicans get away with this in North Carolina, with our moderate and centrist heritage, they can do it anywhere." He's planning a national Moral Monday rally in Washington, D.C., in August.

North Carolina is still the prototype swing state—Mr. Obama won here in 2008, Mitt Romney in 2012—so Democrats could stage a comeback on Tobacco Road.

But as longtime Republican strategist Marc Rotterman told me last week, there is a potentially fatal flaw to the whole "Moral Monday" strategy: "The core problem is the protesters are denouncing policies like tax cuts and welfare reforms that may be unpopular with the New York Times, but are very popular with mainstream North Carolinians." That is the big bet the state's Republicans are making—and come November 2014, we'll see if it pays off.


Mr. Moore is a member of the Journal's editorial board.

A version of this article appeared July 19, 2013, on page A13 in the U.S. edition of The Wall Street Journal, with the headline: Why Are North Carolina Liberals So @&%*! Angry?.
Posted by Leo Rugiens at 8:35 AM