The Writing of a Great Address

Lincoln began forming his thoughts just after the Battle of Gettysburg.

The air is full of the Battle of Gettysburg, whose 150th anniversary this week marked. Those who love history are thinking about Little Round Top and Devil's Den, Culp's Hill and the Peach Orchard, and all the valor and mistakes of men at war. The mystery of them, too. How did Joshua Chamberlain, a bookish young professor of rhetoric from Maine, turn into a steely-eyed warrior of the most extraordinary grit and guts at the exact moment those qualities were most needed? He was a living hinge of history. Why did Robert E. Lee, that military master who always knew when not to push it too far, push it too far and order Pickett to charge that open field?

At Gettysburg, great deeds were followed by great words. The battle won the war—it was the turning point—and a speech named the war's meaning. We will mark the 150th anniversary of the Gettysburg address this fall.

What do we know of its writing? Still pretty much what John Nicolay told us in 1894, 31 years later. In an essay in The Century, a quarterly, Nicolay, one of Lincoln's two private secretaries, sought to put to rest some myths.

On Nov. 19, 1863, President Lincoln would speak at the dedication of the new national cemetery. He had been invited just over two weeks before, so he wouldn't have long to prepare his remarks. And he was busy with other things—a report to Congress, the day-to-day conduct of the war.

"There is no record of when Mr. Lincoln wrote the first sentences of his proposed address," wrote Nicolay. "He probably followed his usual habit in such matters, using great deliberation in arranging his thoughts, and molding his phrases mentally, waiting to reduce them to writing until they had taken satisfactory form."

This is a somewhat unusual way to write an important document. It's how Samuel Johnson often wrote his essays, getting it right in his head and then committing it, almost fully formed, to paper. From my observation, writers of speeches tend to jot down thoughts, ideas and bits of language and then compose, draft after draft, from the notes. I asked a friend, a writer and artist, if he knew of another writer who wrote as Lincoln and Johnson did. "No, but I know of a great composer who seems to have done exactly that—Mozart."

Lincoln traveled to Gettysburg by train, arriving near sundown the night before the speech. In his pocket, not his hat, he carried an almost-finished draft, written in ink on Executive Office stationery. He didn't write any of the speech on the trip—there was too much bustle around him, and the train jerked too much.

That night in Gettysburg, Lincoln stayed in the home of David Wills, a local "eminento" who'd pushed the idea of the national cemetery and helped buy the land. The little town was overrun with visitors. A crowd gathered at Wills's house and called out to Lincoln to speak. 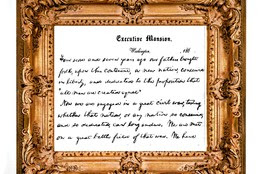 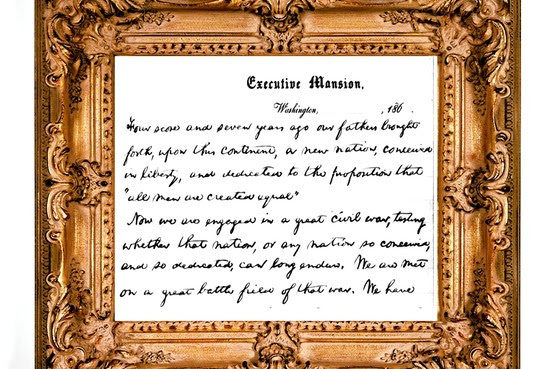 
Here we see a nice moment of the egalitarianism and lack of reverence with which 19th-century Americans approached their presidents.
Lincoln came out and said: "I appear before you . . . merely to thank you for the compliment." He would not deliver a speech for "several substantial reasons." One is that he didn't have one. "In my position it is somewhat important that I should not say any foolish things," he added.
"If you can help it," shot a voice from the crowd.
Lincoln said the only way to help it was to say "nothing at all."

The next morning, Nicolay joined Lincoln upstairs and stayed for about an hour as the president, with lead pencil, finished the speech.

Days before, Lincoln had told the reporter Noah Brooks that the address would be "short, short, short." He wasn't the main speaker of the day; that was the famous orator Edward Everett, who spoke at noon, for two hours.

From Lincoln the crowd expected something quick, maybe pithy, possibly perfunctory. "They were therefore totally unprepared for what they heard," Nicolay recalled, "and could not immediately realize that his words, and not those of the carefully selected orator, were to carry the concentrated thought of the occasion like a trumpet-peal to furthest posterity."

Nicolay sat a few feet from Lincoln. "It is the distinct recollection of the writer . . . that he did not read from the written pages," that there was nothing "mechanical" in his delivery. He spoke instead from "the fullness and conciseness of thought and memory."

In the end there were three versions of the speech, all the same in meaning but with small stylistic differences.  There was the draft Lincoln wrote in Washington and finished in Gettysburg. There is the version taken down in shorthand by an Associated Press reporter as the president spoke—this would be telegraphed across the country and splashed on the next morning's front pages. And there is the revised copy Lincoln made after his return to the White House. He compared his original draft with the version in the newspapers and included "his own recollections of the exact form in which he delivered" the speech. That draft is now the official, agreed-upon text.

More from Allen Guelzo's new "Gettysburg: The Last Invasion," a sweeping and meticulous recounting of the battle that never loses sight of its essentials. Mr. Guelzo, in an epilogue, says something about the Gettysburg Address I'd not seen noted in a life reading Lincoln.

It turns out Lincoln gave a kind of preview of the address only three days after the battle had ended. It was July 7. Word had reached the War Department of another Union triumph, on July 4, at Vicksburg, Miss. This greatly cheered a glum Lincoln, who'd been grieving Gen. George Meade's decision not to follow and crush Lee's forces as they retreated from Pennsylvania. What happened at Vicksburg underscored the momentum toward victory. Lincoln called the news "great. . . . It is great!"
Word swept through Washington. A crowd marched down Pennsylvania Avenue to the White House and called for a speech.

Lincoln improvised from a second-floor window. Actually he rambled, but you can see where even then he was going. Guelzo puts Lincoln's remarks in italics: "How long ago is it? . . . eighty odd years—since on the Fourth of July for the first time in the history of the world a nation by its representatives, assembled and declared as a self-evident truth that 'all men are created equal.' " The victories at Gettysburg and Vicksburg, he said, had put the opponents of that truth on the run.
This, Lincoln said, was "a glorious theme," but he was not prepared, at that moment, to do it justice.
He would, however, in the next two weeks, as he thought, and formulated, and decided exactly how he wanted to say what he wanted to say.

"How long ago is it—eighty odd years?" would become, "Four score and seven years ago." Less dry and numeric, that. Almost biblical, as if the events of 1776 were epochal in the history of man.
Which is what he thought.
And he was right.

Happy 237th Independence Day to America, the great and fabled nation that is still, this day, the hope of the world.

A version of this article appeared July 5, 2013, on page A13 in the U.S. edition of The Wall Street Journal, with the headline: The Writing of a Great Address.
Posted by Leo Rugiens at 9:39 AM