IF HUMAN EMBRYONIC STEM-CELL RESEARCH DOES NOT MAKE YOU AT LEAST A LITTLE BIT UNCOMFORTABLE, YOU HAVE NOT THOUGHT ABOUT IT ENOUGH ! 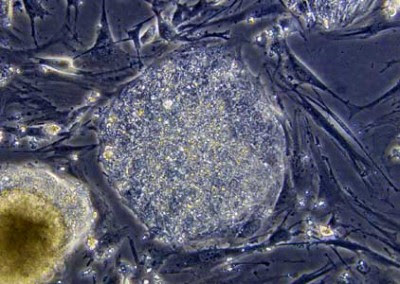 CLOSE-UP VIEW OF A STEM-CELL

SHORTLY AFTER the president announced his new policy on funding embryonic stem-cell research, CNN's Larry King devoted a special program to the subject. His first guest was Mary Tyler Moore, the international chairman of the Juvenile Diabetes Research Foundation, who has long been involved in raising funds and awareness for the treatment of Type 1 diabetes, a disease for which there is still no cure.

"I am so pleased with the thought and care that he put into making this decision. I think it's a good one," Moore told King when he asked for her reaction to the president's statement. "What's wonderful too is that this means that the United States will maintain its leadership in things medical and scientific. . . . So this is a very good thing."

Moore's words of praise might not strike you as exceptional, given the widespread approval last week of President Obama's order reversing the Bush administration's restrictions. But Moore wasn't speaking about Obama. Her interview on "Larry King Live" followed President Bush's stem-cell decision, which was announced in a televised address on Aug. 9, 2001. Also joining the conversation that night was Christopher Reeve. His take on Bush's policy was "a little bit more mixed," he acknowledged. "However, I think it is a step in the right direction. I'm grateful for that to the president."

For eight years Bush's critics caricatured him as a Bible-thumping yahoo for whom ideology routinely trumped science, so it might be difficult to remember that the policy he articulated in 2001 was anything but a knee-jerk rejection of scientific progress. The commentator Charles Krauthammer-- a graduate of Harvard Medical School, a quadriplegic, and a former member of the President's Council on Bioethics who did not agree with Bush's decision -- recalled it a few days ago nonetheless as "the single most morally serious presidential speech on medical ethics ever given." In it, Bush explained why "embryonic stem-cell research offers both great promise and great peril," conscientiously laying out the arguments for and against supporting such research with tax dollars. In the end, he concluded that federal funding could be justified for work on existing stem-cell lines, but not for research that would require the destruction of additional human embryos. Bush's decision had clearly been reached after much deliberation and consultation. "I don't think he did it just politically," Reeve observed. "I do believe he really thought about it."

Obama had an opportunity last week to deliver an equally thoughtful speech. He could have explored the moral dilemmas involved in exploiting a living embryo to advance scientific knowledge. Instead he resorted to political rhetoric and ill-disguised scorn for his predecessor.

The president rejected the "false choice between sound science and moral values" that supposedly characterized the Bush policy, and declared that his administration would "make scientific decisions based on facts, not ideology." Promoting science, Obama said, means "letting scientists . . . do their jobs, free from manipulation or coercion" and "listening to what they tell us, even when it's inconvenient."

But science is not an unqualified good, and scientific ends do not justify any and all means. It is not "manipulation" or "coercion" or "ideology" to insist that scientific research -- especially when funded by taxpayers -- be restrained by moral and ethical guardrails. The absence of those guardrails can lead to such abominations as the Tuskegee Syphilis Study, in which government doctors -- with the support of the American Medical Association -- deliberately withheld medical treatment from infected black men in order to better understand the natural progression of venereal disease. Those who raised ethical qualms about the study were disregarded by the Public Health Service -- an example of what Obama might call rejecting the "false choice between sound science and moral values."

Like most Americans, I don't believe that microscopic human embryos deserve all the legal protections of personhood. But whether it is right to kill such embryos for the sake of medical research is not just a question about science; it is also a question of moral and political judgment. Public officials are called on to make those judgments, not to simply defer to whatever scientists say they want. Obama blithely concedes that "many thoughtful and decent people are conflicted about, or strongly oppose, this research." Yet at no point did he articulate or address those concerns, let alone attempt to allay them.

"If human embryonic stem cell research does not make you at least a little bit uncomfortable," Dr. James Thomson, the pioneer of embryonic stem-cell science, told The New York Times in 2007, "you have not thought about it enough." Thomson's remark has been widely quoted, but it seems not everyone has gotten the message.

**************************
The article above, written by Jeff Jacoby, is excellent and is typical of the high quality writing which he consistently exhibits in his column. There is one point in his article with which I disagree. That is where he writes: "I don't believe that microscopic human embryos deserve all the legal protections of personhood."

That reservation on the part of Jacoby is all the more amazing when one recalls that as an observant Jew he writes frequently about the horror of Hitler's Holocaust destruction of Jews, Catholics, Slavs, Gypsies, et al.

The question I would put to Jeff Jacoby is: What qualities of a human person would you single out to differentiate between giving full protection of the law to EVERY human being and only to SOME human beings?