PETER SINGER, A LIVING CONTRADICTION: ADVOCATE OF HELPING THE POOR WHILE BEING THE INTELLECTUAL ENABLER FOR THE MODERN CULTURE OF DEATH

Reason, education, and intellectual quickness are to be prized,
but they are no substitute for
good character, kindness, and ethical values.
In the 20th century, after all, it was learned intellectuals
who signed newspaper ads supporting Stalin,
and men with PhDs who planned
Hitler's Final Solution for Jews, Catholics,
Gypsies, et al. 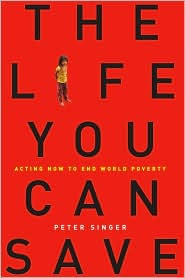 PETER SINGER has written a new book. The prominent Australian philosopher, a professor of bioethics at Princeton University, argues in The Life You Can Save

that residents of the affluent West have it within their power to eradicate extreme Third World poverty and its attendant suffering. By donating money to charity instead of spending it on things we don't really need, he writes, everyone can save lives -- and when you fail to do so, he suggests, "you are leaving a child to die, a child you could have saved."

Singer told the Wall Street Journal last week that he tries to practice what he preaches by giving one-third of his income to "Oxfam and other organizations working in the field." Few of us can give away that much of our earnings, but Singer urges most people to donate between 1 percent and 5 percent of what they make to help the destitute, with those who earn more digging even deeper.

You don't have to be a disciple of Singer's philosophy to admire his commitment to charity, especially when you consider the tightfistedness of some of our leading public figures. (One recent example: For the 10 years ending in 2007, then-Senator Joseph Biden and his wife gave slightly more than one-eighth of 1 percent of their income to charity -- a mere $3,690 on an adjusted gross income of $2.45 million.) I salute Singer's generosity, and sincerely hope that his new book prompts many readers to do more for the needy than they have ever thought about doing before.

And yet I can't help wondering which will ultimately prove more influential -- Singer's efforts to save lives through charity, or the role he has played as an intellectual enabler for the modern culture of death.

In 2005, Foreign Policy marked its 35th anniversary by asking several thinkers to speculate on what ideas or values taken for granted today will vanish in the next 35 years. "The sanctity of life," answered Singer, looking forward to the day when "only a rump of hard-core, know-nothing religious fundamentalists will defend the view that every human life, from conception to death, is sacrosanct." A year earlier, pronouncing "the whole edifice of Judeo-Christian morality . . . terminally ill," Singer had elaborated on his notorious view that it ought to be lawful to kill severely disabled infants. "All I am saying," he told The Independent, "is, why limit the killing to the womb? Nothing magical happens at birth. Of course infanticide needs to be strictly legally controlled and rare -- but it should not be ruled out, any more than abortion."

Perhaps it seems odd that the same individual can be a champion of both saving life through philanthropy and ending life through legalized infanticide. Yet if morality is merely a matter of opinion and preference -- if there is no overarching ethical code that supersedes any value system we can contrive for ourselves -- then why not value the lives of the impoverished above the lives of the disabled? Singer accepts that some of what he says "seems obscene and evil if you are still looking at it through the prism of the old morality." But give up that "old morality," and the objections are easily resolved.

In his Wall Street Journal interview, Singer spoke of dilemmas that may arise in the future when parents are able to select the genetic traits of their offspring. "I would not oppose selecting for intelligence," he says. "We could assume that people of higher intelligence would have good consequences for society."

Could we, though? Does higher intelligence always, or even usually, lead to "good consequences?" Like strength or agility or attractiveness, intelligence is only a gift, not a guarantee -- an asset that can as readily be used to harm others as to help them. Singer's faith in intelligence is consistent with his own life's work, but highly intelligent people are perfectly capable of monstrousness. Reason, education, and intellectual quickness are to be prized, but they are no substitute for good character, kindness, and ethical values. In the 20th century, after all, it was learned intellectuals who signed newspaper ads supporting Stalin, and men with PhDs who planned Hitler's Final Solution.

Intelligence alone will not make the world a better place, and if anyone's career proves the point, it is Singer's. Over the years, he has turned his skill to rationalizing bestiality, proposing a 28-day period during which newborns could be killed, and concluding that breeding children for spare parts is "not . . . something really wrong in itself." And why not? Once you've jettisoned the "old morality," good and evil become just a matter of opinion. "Man without God is a beast," wrote Whittaker Chambers, "never more beastly than when he is most intelligent about his beastliness."

Intelligence is no guarantee of goodness