THANKS TO GEORGE W. BUSH, IRAQ HAS BEEN TRANSFORMED FROM ONE OF THE MOST BRUTAL TYRANNIES ON EARTH TO AN EXAMPLE OF DEMOCRATIC PLURALISM 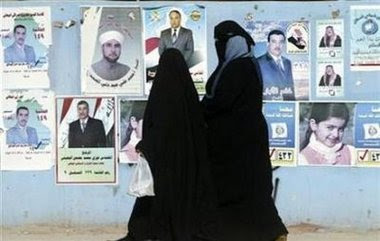 So began Terry McCarthy's report from Iraq for ABC's World News Sunday on March 15, one of a series the network aired last week as the war in Iraq reached its sixth anniversary.

A nationwide poll of Iraqis reveals that "60 percent expect things to get better next year -- almost three times as many as a year and a half ago," McCarthy continued. "Iraqis are slowly discovering they have a future. We flew south to Basra, where 94 percent say their lives are going well. Oil is plentiful here. So is money."

In another report two nights later, ABC's correspondent characterized the Iraqi capital as "a city reborn: speed, light, style -- this is Baghdad today. Where car bombs have given way to car racing. Where a once-looted museum has been restored and reopened. And where young women who were forced to cover their heads can again wear the clothes that they like." One such young woman is dental student Hiba al-Jassin, who fled Baghdad's horrific violence two years ago, but found the city transformed when she returned last fall. "I'm just optimistic," she told McCarthy. "I think we are on the right path."

"Iraq combat deaths at 6-year low" USA Today reported on its front page last Wednesday. The story noted that in the first two months of 2009, 15 US soldiers were killed in action -- one-fourth the number killed in the same period a year ago, and one-tenth the 2007 toll. The reduction in deaths reflects the reduction in violence, which has plummeted by 90 percent since former President Bush ordered General David Petraeus to implement a new counterinsurgency strategy -- the "surge" -- in early 2007. Even in northern Iraq, where some al-Qaeda terrorists are still active, attacks are down by 70 percent.

In the wake of improved security have come political reconciliation and compromise. Iraq's democratic government continues to mature, with ethnic and religious loyalties beginning to yield to broader political concerns.

The Washington Post reports that the country's foremost Shiite politician, Prime Minister Nouri al-Maliki, has formed an alliance with Saleh al-Mutlak, an outspoken Sunni leader. It is a development that suggests "the emergence of a new axis of power in Iraq centered on a strong central government and nationalism" -- a dramatic change from the sectarian passions that fueled so much bloody agony in 2006 and 2007. In the recent provincial elections, writes the Post's Anthony Shadid, Maliki's party won major gains, with the prime minister "forgoing the slogans of his Islamist past for a platform of law and order." Despite his erstwhile reputation as a Shiite hardliner, Maliki now echoes Mutlak's call for burying the hatchet with supporters of Saddam Hussein's overwhelmingly Sunni Baath Party.

Those elections were yet another blow to the conviction that constitutional democracy and Arab culture are incompatible. For the 440 seats to be filled, more than 14,000 candidates and some 400 political parties contended -- a level of democratic competition that leaves American elections in the dust. A Jeffersonian republic of yeoman smallholders Iraq will never be. But over the past six years it has been transformed from one of the most brutal tyrannies on earth to an example of democratic pluralism in the heart of the Arab world.

For a long time the foes of the Iraq war and the president who launched it insisted that none of this was possible -- that the war was lost, that there was no military solution to the sectarian slaughter, that the surge would only make the violence worse. Victory was not an option, the critics declared; the only option was to partition Iraq and get out. Time and again it was said that the war would forever be remembered as Bush's folly, if not indeed as the worst foreign policy mistake in US history.

Even now, with a stubbornness born of partisan hostility or political ideology, there are those who cannot bring themselves to utter the words "victory" and "Iraq" in the same sentence. But six years after the war began, it is ending in victory. As in every war, the price of that victory was higher than we would have wished. The price of defeat would have been far higher.

“Bush's 'folly' is ending in victory”
by Jeff Jacoby
The Boston Globe
March 25, 2009
http://www.jeffjacoby.com/5134/bushs-folly-is-ending-in-victory
(Jeff Jacoby is a columnist for The Boston Globe.)