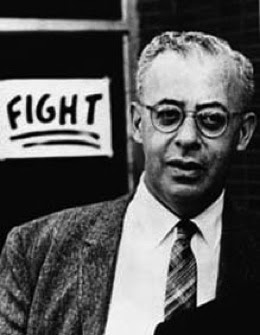 SAUL ALINSKY
"... the community organizer ... must first rub raw the resentments of the people; fan the latent hostilities to the point of overt expression.'
-- Saul Alinsky, Rules for Radicals


"THERE IS ONLY THE FIGHT --- An analysis of the Alinsky Model."
-- Hillary Clinton, BA Honors Thesis, Wellesley College, 1969.

"(Barack) Obama worked in the organizing tradition of Saul Alinsky, who made Chicago the birthplace of modern community organizing...."
-- The Nation

A psychopath is a person without conscience; someone who constantly breaks the moral rules of the community. Saul Alinsky was a "community organizer" who found a career that fit that personality disorder. In the Orwellian upside-down world of the Left, community organizers disorganize communities. That is the meaning of revolution, to overturn whatever exists today in the raw pursuit of one's own power.

Alinsky boasted about his close alliance with Frank Nitti, Al Capone's second in command in the Chicago Mob during the 1930s. Al Capone's Mob were domestic terrorists, and not for any noble cause either. They poisoned the Chicago politics of their era. Alinsky's close alliance with Frank Nitti tells us something crucially important today. Alinsky was also a lifelong ally of the Stalin-controlled Communist Party, at a time when Stalin was known to have murdered tens of millions of people. He was proud of building a bridge between organized crime and the power hungry Left. That tacit alliance may continue today.

Alinsky's personality fits the definition of a psychopath -- someone who has no guilt or shame toward others. But Alinsky also discovered how to teach psychopathic behavior to college students. That is the key to his success: To persuade hundreds of thousands of ignorant young people that it is much more moral to be immoral. Or, as Bill Ayers famously said, "Bring the Revolution home; kill your parents."

Bill Ayers is now a highly influential professor of education. That is not an accident; it reflects a deliberate program of radical agitation and propaganda through the school systems. If you want to know who brought down American education, Bill Ayers is part of the answer.

A lot of the Boomer Left is marked by psychopathic behavior, in politics and in the rest of life. That is why the actions of the Left are so shocking to many of us.

Alinsky's disciples -- including Hillary Clinton and Barack Obama -- have a warlike political style. They learned politics as war from the Master. Obama is so well-trained in Alinsky tactics that he used to teach workshops on it. That is why Obama can knowingly violate Federal law against usurping the presidential power to negotiate with Iraq before ever getting elected. Actual election to head of state by the voters means nothing, just as it means nothing to Nancy Pelosi and Steny Hoyer, who have negotiated with Syria and the Muslim Brotherhood in clear violation of law while serving in Congress.

Teaching hatred for the normal majority is the key to power for radicals. But Alinsky taught that you can't easily hate millions of people. To do that effectively you need a one-person scapegoat to focus all your hatred on. "Pick the target, freeze it, personalize it, and polarize it." That is the politics of personal destruction, and it doesn't matter if the target is black like Clarence Thomas, or a woman like Sarah Palin, or a severely wounded war veteran like John McCain.

That is why Obama is now instructing his followers to "get in their faces" of those Americans who are not down for his cause. Obama acts like a nice guy, but he is a political warmonger. He's been very clear about that: "If they bring a knife to the fight, we bring a gun." That's the language of gang war.

Today we can see the Left's rage reaction to John McCain's choice of Sarah Palin. The New York Sun quoted one feminist saying "All of my women friends, a week ago Monday, were on the verge of throwing themselves out windows ...People were flipping out. ... Every woman I know was in high hysteria over this. Everyone was just beside themselves with terror that this woman could be our president -- our potential next president."

The "comedienne" Sandra Bernhard suggested that Sarah Palin would be "gang-raped by blacks in Manhattan" if she dared to go there.

A British Leftist writing for Pravda (!) called "Sarah Palin - The Devil in disguise...

Sarah Palin, Mrs. Nobody know-it-all shreiking cow from Alaska, the joke of American politics, plied with a couple of vodkas ... cheap little guttersnipe ... suppose you shut up ... you pith-headed little bimbo from the back of beyond ... So next time suppose you keep your mouth shut and while you're at it, make sure the members of your family keep their legs shut too. ... "


That warlike rage has been systematically whipped up over decades by the Left. That's what college "Women's Studies" does, just as "Black Studies" is deliberately designed to whip up black rage and victimhood. Michelle Obama's Princeton thesis is a case in point.

Alinsky called ordinary Americans "the enemy." Normal people don't declare war on all of society. But Alinsky wrote in Rules for Radicals that radicals

"...have contemptuously rejected the values and way of life of the middle class. They have stigmatized it as materialistic, decadent, bourgeois, degenerate, imperialistic, war-mongering, brutalized and corrupt ... They are right ... "


Normal, decent America is the enemy for these people.

Obama and Hillary are lifelong followers of Alinsky. They use his tactics and ideology. That is why American politics became the politics of personal destruction when the Boomer Left came to power.

These claims require proof; but we have been looking straight at the evidence since the first Clinton term. Bill Clinton fits the diagnostic description of psychopathic personality, now relabeled "antisocial personality' in the DSM IV, the official diagnostic manual for psychiatry. Three out of the following seven criteria nails the diagnosis:

1. Failure to conform to social norms ...

2. Deceitfulness ... or conning others for personal profit or pleasure;

3. Impulsivity or failure to plan ahead;

5. Reckless disregard for safety of self or others;

7. Lack of remorse, as indicated by being indifferent to or rationalizing having hurt, mistreated, or stolen from another.


I would give Mr. Clinton credit for Numbers 1, 2, 6, and 7, and possibly 3 (impulsivity) and 4 (irritability and aggressiveness). Dick Morris, who advised the Clintons for 20 years, describes dramatic scenes that certainly fit the description. Or Bill's inability to stick with a meeting agenda, impulsively running endless bull sessions at the White House. As for 5, his picking up women opportunistically and in a way that put his career, not to mention his family life and American security, at risk. The Monica affair showed an impulsive, reckless president who got into power by endless lying and conning.

Liberal Democrats used to be normal Americans before the Boomer Left rose to power. Hubert Humphrey and Harry Truman had a strong sense of American morality. They despised the Stalinist Left and fought to keep them out of the Democrat Party. They were sensitive to ordinary shame and guilt, the emotions that make us civilized. When Bob Dole asked "Where is the shame?" in the 1996 presidential election, the answer came out: Not in the modern Democrat Party. People without guilt or shame make merciless power mongers.

Normal people slow down in School Zones where kids might run across the street -- not because they're afraid of getting a speeding ticket but because they can't stand the thought of hurting kids. They don't need to cheat compulsively on wives and husbands to prove how irresistible they are. Normal people have internalized some modesty and humility, and are capable of respect and love for others. A common feature of psychopaths is the inability to feel authentic love and respect for others.

True psychopaths are often charming, seductive, and treacherous. They make natural con artists. Many psychopaths are extremely manipulative -- and what is more manipulative than stirring up hatred among victim groups to empower oneself? That is Jeremiah Wright, the diabolical Father Pfleger, James Meeks, and by his own definition of radicals, Saul Alinsky.

But the single most important point about Alinsky's "community organizing" strategy is that normal people can be trained to act like psychopaths: To become convinced that a "higher morality" allows them to act without conscience. As Alinsky wrote admiringly about V.I. Lenin, well known as a large-scale murder leader:

"Lenin was a pragmatist; ... he said that the Bolsheviks stood for getting power through the ballot box but would reconsider after they got the guns!"


That is a laugh line, believe it or not.

Alinsky called this "pragmatic radicalism." He differed from his Communist friends only in being more practical and less ideological. Alinsky was a radical because it suited his personality, because it was fun, brought him power and influence, and made him feel good. He was very clear in saying that, and he inspired the Boomer Left to follow his lead.

"... to the very first radical . . . who rebelled against the establishment and did it so effectively that he at least won his own kingdom - Lucifer."


If that doesn't send a shiver down your back, you haven't been paying attention.