OBAMA TAKE NOTE: IT IS NOT A SIGN OF POST-PARTISANSHIP WHEN LIBERALS SWOON AND CONSERVATIVES SEETHE FOR EXACTLY THE SAME REASON 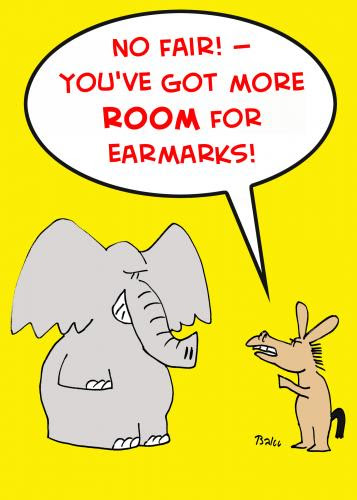 THAT WAS THEN,
THE ROLES ARE REVERSED NOW

In Mark Strand's pleasingly odd poem "The Tunnel," the author is tormented by a persistent, moaning man in front of his house. The narrator vainly orders him to leave, makes obscene gestures through the window and destroys the living room furniture "to prove I own nothing of value." Finally, the author takes refuge in his basement and digs a tunnel to escape -- only to emerge moaning outside a house, where "I have been waiting for days."

Against all my expectations, President Barack Obama is having this effect on me.

Following Obama during the New Hampshire primary, I saw a candidate who -- though I disagreed with him on many issues -- defended idealism and rhetoric against the supremely cynical Clinton machine, who brought a religious sensibility to matters of social justice, who took care to understand and accommodate the arguments of others, who provided a temperamental contrast to culture war politics.

After just weeks of governing, that image seems like a brittle, yellowed photograph, buried at the back of a drawer.

Obama's proposed budget shows all the vision, restraint and grace of a grasping committee chairman, using the cover of a still-unresolved banking crisis to push through a broad liberal wish list before anyone notices its costs and complications. The pledge of "responsibility" has become the massive expansion of debt, the constant allocation of blame to others and the childish cultivation of controversy with conservative media figures to favorably polarize the electorate. The pledge of "honesty" and "sacrifice" has become the deceptive guarantee of apparently limitless public benefits at the expense of a very few. The pledge of "bipartisan" cooperation has become an attempt to shove Republicans until their backs reach some wall of outrage and humiliation.

None of this is new or exceptional -- which is the point. It is exactly the way things have always been done.

Obama's stem cell decision was worse, because it is a thing that has never been done before. "Obama," explains Yuval Levin of the Ethics and Public Policy Center, "is willfully ignoring the moral complexity of the subject. He says he understands the views of his opponents, but he never addresses or answers them. He seems to have adopted the premise that the stem cell debate presents a choice between science and ignorance, when in fact the debate requires the kind of weighing of competing goods which we elect presidents to contend with."

Obama's approach is ethically simplistic -- the kind of argument that gets nods at a fashionable cocktail party instead of engaging and respecting serious disagreement.

One tragedy of these polarizing moves is that they obscure elements of Obama's agenda that deserve praise and support. It makes perfect moral and economic sense to expand child nutrition programs, ensuring that low-income children get breakfast and lunch during a time of economic stress. Also, to expand rental assistance to low-income families. To fully fund the Second Chance Act, which helps ex-prisoners reintegrate into society. To increase funding for domestic AIDS treatment, especially in African-American and Latino communities. To make the child tax credit at least partially refundable. To limit farm subsidies that distort global food markets and hurt the poor. To provide additional support to strained food banks. To make the saver's credit refundable, encouraging low-income Americans to build assets. To maintain life-saving commitments promoting global health and development.

These should be common-ground issues in our politics -- safe havens on the ideological battlefield and sources of genuine consensus. But these issues have been roundly ignored during the ideological death match Obama has encouraged -- a partisan struggle that has made congressional Republicans less likely to support his best initiatives. Obama's overall budget is praised by economist Robert Reich as driving "a nail in the coffin of Reaganomics." Republicans attack the budget for the same reason. And both are correct in their analysis. It is not a sign of post-partisanship when liberals swoon and conservatives seethe for exactly the same reason. It is a sign that our differences have been exploited and deepened.

Some relish this kind of politics. But the false dawn of post-partisanship is no reason for celebration. Ideological war creates an atmosphere in which the angry predominate -- and it can cause anger to rise unbidden within all of us. While in government, I saw the persistent, moaning critics outside the window. Now I have dug my tunnel and joined them. It is not where I want to be -- or where American politics might have been.