MASSACHUSETTS LIKES TO TOUT ITSELF AS THE CRADLE OF US DEMOCRACY, BUT THE AUTOCRATIC ONE-PARTY POLITICS THERE MAKE A MOCKERY OF THAT BOAST. 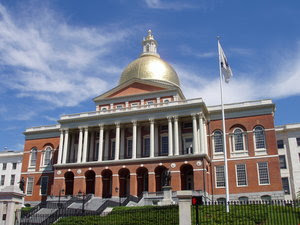 IF ANY STATE could be called a wholly owned subsidiary of the Democratic Party,
it would be Massachusetts.

Its statewide elected officials are all Democrats,
as is every member of its congressional delegation.

The Legislature is the most lopsidedly Democratic in the union --
there are only five Republicans among the 40 senators,
and just 16 in the 160-member House of Representatives --
and it has been more than half a century since the GOP controlled either branch.

Political analyst Jon Keller writes in The Bluest State , his uninhibited survey of contemporary Bay State politics, "Massachusetts over the past few decades has been a Democrats' Burger King: They always have it their way."

Massachusetts isn't only the nation's most Democratic state. It is also the nation's most undemocratic state. Elections occur on a regular basis, but few of them are contested. Republican and Democratic candidates squared off for just 35 of the 200 legislative seats on the ballot last November -- a pathetic 17 percent. In no other state are competitive races so rare. And rarer still are contested primaries: Last year, nearly 9 out of 10 Democratic incumbents were renominated without a challenge.

The Massachusetts Institute for a New Commonwealth, a nonpartisan Boston think tank, has been trying to answer that question. In the current issue of its journal CommonWealth, Alison Lobron contrasts the sclerotic political culture of Massachusetts with the electoral vibrancy of Minnesota. The dissimilarity between the two could hardly be more pronounced: Last fall, as the overwhelming majority of Massachusetts legislators were running unopposed for reelection, Minnesota's Republican and Democratic parties contested every seat in their state's House of Representatives.

What accounts for the difference? Part of the answer, Lobron suggests, has to do with money. Legislative candidates in Minnesota abide by a $35,000 spending cap, and taxpayers who contribute to public financing designate which party they want their dollars to support. In Massachusetts, incumbents deter challengers by amassing vast campaign war chests. Minnesota politicians, on the other hand, have a "carry-forward" rule that bars them from retaining more than $15,000 from one campaign to the next.

More significant is Minnesota's strict limit on legislative sessions -- a far cry from Massachusetts's year-round legislature. In the Gopher State, lawmakers convene for no more than 120 days every two years, so most of them have real jobs. While 58 percent of Massachusetts senators and representatives identify their occupation as "legislator," the comparable figure in Minnesota is 11 percent. According to the National Conference of State Legislatures (2007 data), more than 19 percent of Minnesota legislators own or work for a business, compared with only 6 percent of their counterparts in Massachusetts.

The conventional wisdom on Beacon Hill is that effective lawmaking requires a House and Senate that never adjourn. Not true. The Minnesota and Massachusetts legislatures passed roughly the same number of bills last year. It just took Massachusetts three times as long.

In Minnesota as in many other states, lawmakers regard themselves primarily as citizens, not professional lawmakers. They convene briefly, attend to the people's business, and go home. The result is not only better governance, but a higher regard for political involvement. To a far greater degree than in Massachusetts, running for office is considered both commendable and doable. The political culture is healthier and less calcified; it anticipates competition and turnover; it encourages an affinity between incumbents and their constituents.

"In Minnesota, legislators pass out their cellphone numbers like candy," Lobron observes. "They publish their home phone numbers on the official state website. They don't have aides who screen their calls and say things like, 'Please hold for Mr. Chairman.' . . . They are, to be blunt, a little humbler than their counterparts on Beacon Hill and much more likely to speak of their work as a temporary service than as a life-long career."

Massachusetts likes to tout itself as the cradle of US democracy, but the autocratic one-party politics here make a mockery of that boast. How enlightened it must feel to live in a state like Minnesota, where elections actually mean something -- and where "government of the people" is more than an empty slogan.