PROSTITUTES ARE NOT ALWAYS FEMALE, SOMETIMES THEY ARE MALE. IF HARRY TRUMAN IS TO BE BELIEVED, THEY CAN SOMETIMES BE FOUND IN CONGRESS 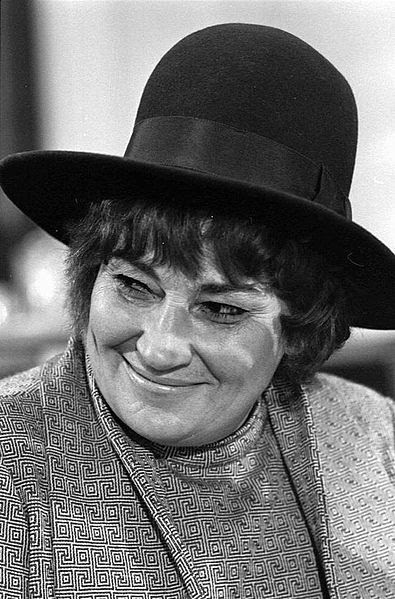 Whenever I read an article on feminism, such as the one by Mike S. Adams shown below, I cannot help but think of Bella Abzug, Congresswoman from New York for 8 years and a leader in the feminist movement in the second half of the Twentieth Century. She was quite a character. I thought of her whenever I saw Helen Thomas at a presidential press conference; although there was never any connection between the two women as far as I new. Maybe it was just their looks. The reference to Harry Truman above was made by me because whenever the subject of prostitution comes up, I recall Harry Truman's famous answer he gave to a reporter who asked him how he came to enter politics and become a member of the United States Congress. Harry Truman answered the reporter this way:
"Well, you know that I am a piano player, and so when I had to choose my career I had my choice. I could become a piano player in a brothel, or I could run for Congress. Later I came to realize that there was no difference!"


I used to have a friend named Ricky back when I attended G.H. Whitcomb Elementary School. Ricky liked to curse a lot even when we were in the 3rd grade. The only reason Ricky liked to curse was to draw attention to Ricky. But once he had your attention Ricky never had anything intelligent to say. Ricky is a lot like the feminists I work with at UNC-Wilmington.

If you walk over to Randall Library at UNC-Wilmington this month you can see a large display that is sponsored by the Women’s Resource Center (WRC). The display is meant to raise awareness of Women’s issues during Women’s History Month, which was previously known as “March.” It certainly reminds me that a number of our campus feminists really do have serious issues.

In large print on the display are the words “Whores are People, too.” Below that one can see pictures of prostitutes surrounded by derogatory names for prostitutes and for women in general. The c-word is one of the many words meant to draw attention to the WRC display. For those who don’t yet know it the c-word means “C.U. Next Tuesday.” You may finish the acronym yourself. Or just listen to any live interview with Jane Fonda.

One major point of the provocative WRC display is to get people to read some statistics on the plight of prostitutes in America. The feminists who run our Women’s Resource Center use the display to decry the fact that most of those arrested for prostitution in America are women. The feminists consider this a form of oppression. Since most prostitutes are female and most “Johns” are male, their remedy is simple: Arrest prostitutes and “Johns” in equal numbers in order to eliminate gender discrimination.

Their suggestion seems reasonable until you stop to give it some thought. Since the feminists rarely stop to give anything serious thought I wrote this explanation for them. As a public sociologist, it’s the least I can do.

Liberals have long had a moral problem with expanding the war on drugs. In fact, most liberals say that it makes sense to contract the war on drugs by focusing on the arrests of large scale drug dealers as opposed to small-time users. The general idea is, of course, a correct one. No one could legitimately argue that the occasional user of an illegal drug is as morally culpable as the regular supplier.

It is obviously logically consistent to want to target prostitutes rather than “Johns” if you believe we should target drug dealers rather than drug users. Go after the suppliers. Remember?

But logical consistency has never been the goal of the academic feminists. Their goal has always been the special treatment of women. And that is why the WRC display also has several provocative pictures of topless women with very large breast implants.

These grotesque nude pictures are accompanied by captions that ask whether the very large and apparently botched boob-jobs are “attractive.” The message is simple: Women should not get breast implants.

But this WRC idea that women should not get breast implants because breast plants are degrading is not logically consistent with their previous decision to co-sponsor the film “Trans-Generation.” When the WRC sponsored that movie, which glorifies sex changes, they were, of course, approving of the idea that men should get breast implants. It’s tough to understand why new breasts are degrading to women and a cause of celebration for men. I thought feminists were against sexist double-standards. Confused yet?

And of course the WRC’s entire public display of profanity and nudity is a good example of how they promote double standards along the lines of gender. They actively support speech codes which are used to ban words far less offensive than the c-word. They also successfully kept the Dallas Cowboy Cheerleaders off campus despite the fact that they intended to keep their shirts on.

I’m afraid that the end result of Women’s History Month may be to promote the ideas that feminists are intellectually shallow, easily offended, and in favor of gender discrimination. Maybe it’s time to arrest these intellectual prostitutes. And cut the average John a little slack.