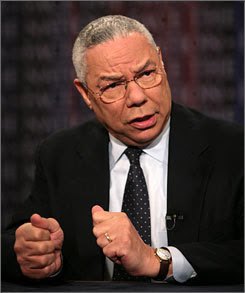 A PROMINENT SUPPORTER
of Barack Obama
told a Washington audience
last week that "the Republican Party is in deep trouble"
and "getting smaller and smaller"
because its views are not in sync with those of mainstream Americans.
Republicans would do better without the "nastiness" of Rush Limbaugh or the "very polarizing" Sarah Palin, the speaker said,
and they would do well to realize that their philosophy
of lower taxes and limited government
has put them out of step with their fellow citizens.

"Americans do want to pay taxes for services," he told his audience. "Americans are looking for more government in their life, not less."

There is nothing particularly unusual about Democrats deprecating conservatism or endorsing big government, but these comments didn't come from a Democrat. The speaker was Colin Powell, who claims to be a Republican.

There are times when party loyalty asks too much, JFK once said, but for Powell there rarely seems to be a time when it doesn't. Though he owes every lofty position he has held -- national security advisor, four-star general, chairman of the Joint Chiefs of Staff, secretary of state -- to Republican presidents, Republicans perpetually appear to rub him the wrong way: especially the conservative Republicans who constitute the party's base.

This is not the first time Powell has urged the GOP to become more liberal. "There is nothing wrong with having socially conservative views," he said during a televised interview in December, but Republicans must "begin appealing to Hispanics, to blacks, to Asians . . . and not just try to influence them by Republican principles and dogma." He complained that Republicans "had moved further to the right" -- something he also complained about last October, when he went on "Meet the Press" to endorse the presidential candidacy of the most liberal member of the US Senate.

Nor is this the first time Powell has denounced Limbaugh.

"Can we continue to listen to Rush Limbaugh?" he asked on CNN a few weeks after throwing his support to Obama. "Is this really the kind of party that we want to be, when these kinds of spokespersons seem to appeal to our lesser instincts rather than our better instincts?"

I wonder if Powell has ever actually listened to Limbaugh. Some years back, the liberal Washington Post columnist William Raspberry wrote a piece in which he compared Limbaugh to the racist politicians he remembered from his Mississippi youth. He accused him of "demagoguery" and of trafficking in "the raw meat of bigotry."

"Rush, I'm sorry," he wrote. He admitted that he had written the first column without ever having tuned in to Limbaugh's program, and that his "opinions about him had come largely from other people." But when readers challenged him to listen to Limbaugh for a while and make up his own mind, he had done so -- and now regretted having so unfairly maligned the man. Limbaugh might be "smart-alecky," a "master of ridicule" who loved "to rattle liberal cages." But as Raspberry had to admit, he was certainly no hater or bigot.

Perhaps if Powell spent less time reflexively deriding the country's most popular conservatives and more time listening to their message, he might admit something similar.

But probably not. Powell's antipathy to the GOP's Reaganite roots has gone beyond the point of reason and reflection. What kind of Republican, after all, preaches that Americans "do want to pay taxes for services" and "are looking for more government in their life, not less"? (The opposite is true: In a nationwide poll last month, 62 percent of respondents said they prefer a government that offers fewer services and lower taxes; only 28 percent preferred more services and higher taxes.) What kind of Republican calls John McCain "my beloved friend" and acknowledges that he "would be a good president" -- then turns around and endorses the most liberal Democrat ever nominated for president?

Republicans these days are in the midst of a debate over how best to rebuild their party, and there are honest differences over what Republicanism should mean.But there are also limits. Powell may sincerely believe that embracing bigger government, higher taxes, and Barack Obama is the formula for success, but most Republicans don't. Most Democrats, on the other hand, do. If party loyalty asks too much, maybe it's time for Powell to switch.
---
THE PARTY OF COLIN POWELL
by Jeff Jacoby
The Boston Globe
May 13, 2009
http://www.jeffjacoby.com/5575/the-party-of-colin-powell
(Jeff Jacoby is a columnist for The Boston Globe.)