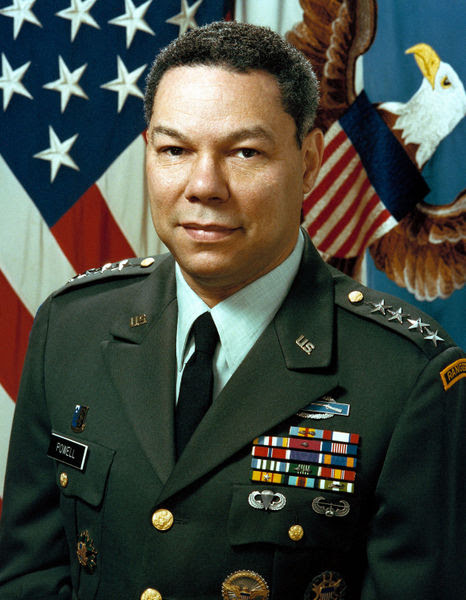 "We do deserts, we don't do mountains" - Colin Powell's famous last words!

Is conservatism over?
Well, of course it is.
Everyone from James Carville to Colin Powell says so.
"The Republican Party is in deep trouble,"
Gen. Powell told some group willing to pay him serious money to deliver this kind of incisive insight.
"Americans do want to pay taxes for services.
Americans want more government in their lives, not less."

Whether or not they want it, they're certainly going to get it. And, if you like big government now, just think how big it'll be once both parties are fully signed up to the concept. You'll recall that Gen. Powell voted for Barack Obama, coming out and publicly stiffing his "beloved friend" John McCain, after years of more discreetly stiffing (in leaks to Bob Woodward and others) his not so beloved colleagues in the Bush administration. But, in fairness to the former secretary of state, his breezy endorsement of more government and more taxes is as near as we've ever got to a coherent political philosophy from him. If the GOP refuses to take his advice, I would urge him to run a third-party campaign on this refreshingly candid platform.

One of Powell's more famous utterances was his rationale, after the 1991 Persian Gulf War, for declining to involve the U.S. military in the Balkans: "We do deserts, we don't do mountains." Actually, by that stage, the U.S. barely did deserts. The first President Bush's decision, at Powell's urging, not to topple Saddam but to halt the coalition forces at the gates of Baghdad sent the world a message about American purpose whose consequences we live with to this day. As for the Kurds and Shia to whom it never occurred that the world's superpower would assemble a mighty coalition for the purposes of fighting half a war to an inconclusive conclusion, Saddam quickly took a bloody revenge: that's an interesting glimpse of what it's like to be on the receiving end of Colin Powell's much-vaunted "moderation."

So I have no great regard for Powell's strategic thinking, at home or abroad. As the general sees it, the Republican Party ought to be a "big tent": Right now, the tent is empty, with only a few "mean-spirited" and "divisive" talk-radio hosts chewing the limbs off live kittens while gibbering to themselves. By comparison, over in the Democrat tent, they've got blacks, gays, unions, professors, Ben Affleck: diversity on parade.

In fact, the GOP's tent has many poles: It has social conservatives, libertarians, fiscal conservatives, national-security hawks. These groups do not always agree: The so-cons resent the libertarians' insouciance on gay marriage and abortion. The libertarians don't get the warhawks' obsession with thankless nation-building in Islamist hellholes. A lot of the hawks can't see why the fiscal cons are so hung up on footling matters like bloated government spending at a time of war. It requires a lot of effort to align these various poles sufficiently to hold up the big tent. And by the 2006 electoral cycle, between the money-no-object Congress at home and a war that seemed to have dwindled down to an endless half-hearted semicolonial policing operation, the GOP poles were tilting badly. The Republican coalition is like a permanent loveless marriage: There are bad times and worse times. And, while social conservatism and libertarianism can be principled to a fault, the vagaries of electoral politics mean they often wind up being represented in office by either unprincipled opportunists like Arlen Specter or unprincipled squishes like Lincoln Chafee.

And yet and yet… Last November, even with the GOP's fiscal profligacy, even with the financial sector's "October surprise," even with a cranky old coot of a nominee unable to articulate any rationale for his candidacy or even string together a coherent thought on the economy, even with a running mate subjected to brutal character assassination in nothing flat, even running against a charming, charismatic media darling of historic significance, even facing the natural cycle of a two-party system the washed-up loser no-hoper side managed to get 46 percent of the vote.

OK, it's not 51 percent. But still: Obama's 53 percent isn't a big transformative landslide just because he behaves as if it is.

To put it in Powellite terms, the general thinks the Republican Party is in the desert, when, in fact, it's climbing a mountain. All things considered, the resilience of American conservatism is one of the most remarkable features of contemporary Western politics. It's up against significant members of its own party. It's up against a media for whom the Democrat positions are the default positions on almost anything that matters. Consider this cooing profile of Secretary Powell from Todd Purdum in The New York Times back in 2002:

"Mr. Powell's approach to almost all issues – foreign or domestic – is pragmatic and nonideological. He is internationalist, multilateralist and moderate. He has supported abortion rights and affirmative action."

So supporting "internationalism," "multilateralism," abortion and racial quotas means you're "moderate" and "nonideological"? And anyone who feels differently is an extreme ideologue? Absolutely. The aim of a large swath of the Left is not to win the debate but to get it canceled before it starts. You can do that in any number of ways – busting up campus appearances by conservatives, "hate speech" prohibitions, activist judges' more imaginative court decisions, or merely, as the Times does, by declaring your side of every issue to be the "moderate" and "nonideological" position – even when, in many cases, the "extreme" position is supported by a majority of voters. Likewise, to Colin Powell, it's Ann Coulter who's "vicious," not Michael Moore, who compares the jihadists who blow up Western troops in Iraq to America's Minutemen and gets rewarded with a seat next to Jimmy Carter in the presidential box at the Democratic Convention.

It's a mountain, and it's getting steeper. Promises of "free" government health care will make more voters susceptible to the blandishments of the nanny state. The Democrats have plans for talk radio and the Internet that will diminish conservative voices. Another retirement on the Supreme Court, and the First and Second Amendments will start getting nibbled away. Obama's buddies at ACORN, already under investigation in multiple states over fraudulent voter registration, will have a prominent say in the 2010 Census.

But, when the going gets tough, you don't, as Gen. Powell advises, "move toward the center." You move the center toward you, as Ronald Reagan and Margaret Thatcher did. It's harder to do it that way, but if it's a choice between more government and more taxes, or more liberty and more opportunity, I'll stick with the latter, and so should the Republican Party – however difficult it is. Unlike Colin Powell, conservatism does do mountains.
---
“Conservatives always face uphill climb
The Left's devotion to government gives it a unity of purpose the Right can't match.”
by Mark Steyn
Syndicated columnist
Friday, May 8, 2009