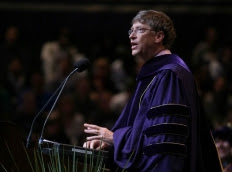 Randall Terry, Founder of Operation Rescue which was responsible for so much progress in the struggle to stop abortion-on-demand in the three decades
following the infamous Roe v Wade and Bolton v Doe decisions of the United States Supreme Court in 1973, has today released an advance copy of the text of the
Honorary Doctorate of Laws, Honoris Causa, Degree
which the University of Notre Dame proposes to confer on
Barack Hussein Obama
at the Commencement Exercises which will be held
on the campus of the University on May 17.

Terry has stated that this text “was given to me by someone connected with Notre Dame; he/she will remain unnamed. I will not answer any questions about this person, because I do not want him/her to lose their job.”

Here is the text released by Terry:

"At the 164th Commencement The May Exercises
The University of Notre Dame
Confers the degree of
Doctor of Laws, honoris causa,
on the 44th president of the United States,
whose historic election opened a new era of hope
in a country long divided by its history of slavery and racism.

A community organizer who honed his advocacy for the poor,
the marginalized and the worker in the streets of Chicago,
he now organizes a larger community,
bringing to the world stage a renewed American dedication
to diplomacy and dialogue with all nations and religions
committed to human rights and the global common good.
Through his willingness to engage with those who disagree with him
and encourage people of faith to bring their beliefs to the public debate,
he is inspiring this nation to heal its divisions of religion, culture, race and politics
in the audacious hope for a brighter tomorrow.

If Terry was indeed given an authentic text, the text will surely add fuel to the fire of scandal caused by the invitation to Obama and the fact that has not only been invited to deliver the Commencement Address, but more seriously, he will be honored by the Doctor of Laws Degree which is to be conferred on him.

No one can deny that Obama’s election was an historic event in the history of the United States. But it will surely be disputed that his election “opened a new era of hope”
for the American people through a most contentious election campaign in which almost half of the American people rejected his candidacy for the presidency.

To further assert that the new era of hope was opened “in a country long divided by its history of slaver and racism” is absurd in view of all that has been accomplished in the United States since the passage of the Civil Rights Act of 1964. It flies in the face of the success of so many black Americans, such as Condi Rice, Colin Powell, Justice Thomas, all the members of Congress on the national level and all the governors in so many states. The truth is that the election of Obama and much of the words and actions of his supporters since his inauguration have reopened old racism wounds and have exacerbated racial tensions in the Nation.

Praising Obama for his work as “A community organizer who honed his advocacy for the poor, the marginalized and the worker in the streets of Chicago” overlooks the reality that his community organizing was done employing the radical methodology of Saul Alinsky within the organizational framework of ACORN; an organization that has been the subject of civil and criminal investigations by law enforcement agencies for decades.

It would seem that the text was written shortly after his inauguration when it states that “he now organizes a larger community, bringing to the world stage a renewed American dedication to diplomacy and dialogue with all nations and religions...” because his record in the first 100 days of his administration gives the lie to that claim.

The worst statement in the text, and the basis for the gravity of the scandal, is “...dedication to...human rights and the global common good.” How could the author of the text write those words when the most outrageous pledge made in the election campaign and now fulfilled since he came into office, is the funding and promotion of abortion-on-demand not only in the United States but throughout the world. Common sense informs every person in the world that among all the human rights the first, the most important, is the right to life. Without respect for the right to life there is no foundation for the existence of any other right.

Far from manifesting a “willingness to engage with those who disagree with him and encourage people of faith to bring their beliefs to the public debate” he has reneged on a pledge to be bipartisan as president and has stiff-armed the minority party on the writing of every piece of legislation he has signed into law since becoming President.
He is not “inspiring this nation to heal its divisions of religion, culture, race and politics.”
His first judicial nominee was Judge Hamilton who, in Indiana, forbade the naming of Jesus in public prayer but approved the naming of Allah.

The concluding phrase of the text is the final absurdity: “he is inspiring this nation...in the audacious hope for a brighter tomorrow.” As he stands on the platform and the doctoral hood is placed on his shoulders Americans need to look around them and ask themselves the question: “With the national debt soaring into trillions (and perhaps quadrillions) of dollars which we will have to begin to pay back and which our children and our children’s children will surely have to pay back, dare we indulge in ‘audacious hope’ for a brighter tomorrow?”

I hope that on May 17 all Americans, not just Catholic Americans, will join in the demonstrations around the country protesting the scandalous farce being perpetrated on the Notre Dame campus that same day.