SOMETIMES THE JUSTICES OF THE UNITED STATES SUPREME COURT SPEAK IN TOUNGES WHEN THEY COMPOSE THEIR OPINIONS, THE RESULT IS CHAOS 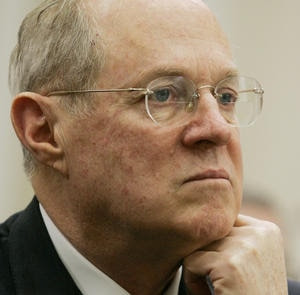 Souter, after all, was supposed to be a conservative and
was appointed by
PresidentGeorge Herbert Walker Bush.
He turned out to be extremely liberal.
The same thing with Bush's choice
of Sandra Day O'Connor and Anthony Kennedy.
Both of them, while not liberal most of the time,
were a big disappointment from time to time.
They had a knack for speaking in tongues.

A friend of mine recently started blogging. His Blog is entitled:
LEX CHRISTIANORUM
“Dedicated to the Law of the Christian People and the Natural Law”
it can be viewed at
http://lexchristianorum.blogspot.com/

As you might guess, he is a lawyer. Not just any kind of lawyer; he is a Catholic and is well grounded in philosophy and theology. I have known him for 24 years.

I was very pleased when, on May 15-16 he posted an analysis of the
U.S. Supreme Court 2003 decision in the case: Lawrence v Texas.
You can read his analysis on the three posts which are titled:
On Anagnorisis and Ephors.

My interest in the case, Lawrence v Texas, dates back to the day it was decided and the decisions were published. I was shocked that Justice Kennedy had written the majority opinion which I thought was very bad.

It seemed to me at the time that the gay activists had won a major victory and that the floodgates were going to be opened and the protections for the unique status for traditional heterosexual marriage between a man and a woman were going to be swept away rather soon.

Justice Scalia’s dissenting opinion was one of the best he has ever written and he offered the same view I have just expressed.

To give you a quick understanding of the case and its implications here below is an article written by Joseph Sobran in 2003.

JURISPRUDENCE IN TONGUES
by Joseph Sobran
The Real News of the Month
Volume 10, Number 7
(page 5)

Something strange happens to people when they get
appointed to the U.S. Supreme Court. They cease to think
and talk like normal human beings. They become possessed
by the Zeitgeist, which speaks through them in spooky
accents, issuing preternatural calls for national
transformation, uninhibited by tradition, precedent, or
even logic. This prophetic spirit has been busy lately.

First Sandra Day O'Connor issued a majority ruling
in favor of affirmative action in state-funded college
admissions policies. Using the magic words "diverse" and
"diversity" fifty times, she called for realizing "the
dream of one nation, indivisible" -- apparently
forgetting, in her mystical transports, that it was the
U.S. Constitution she was supposed to be ruling on and
quoting the Pledge of Allegiance instead.

Nor did she bother explaining how "diversity" -- a
euphemism for discrimination against whites -- will
achieve the promised wonders; but never mind. It would be
an indignity to subject the prophetic spirit to such
nitpicking.

The Constitution doesn't forbid the states to fund
schools and colleges or to dictate any admissions
standards they happen to choose. But O'Connor didn't make
her case on this ground; she assumed the authority of the
Federal Government, and of the Court, to review and judge
the states' actions in this area. It so happens that she
approves the principle of racial preferences, discreetly
applied (with certain arbitrary exceptions).

But the Court wasn't finished. Three days later it
ruled that a Texas law against homosexual sodomy was
unconstitutional. This time the prophetic messenger was
Anthony Kennedy, like O'Connor a Reagan appointee who has
grown in office. He too disdained to quote the text of
the Constitution, preferring to quote himself.

In Planned Parenthood v. Casey (1992), which
reaffirmed Roe v. Wade, Kennedy, a nominal Catholic,
wrote, "At the heart of liberty is the right to define
one's own concept of existence, of meaning, of the
universe, and of the mystery of human life." This woolly
philosophizing has been widely lampooned -- in his
dissent, Antonin Scalia mockingly referred to it as the
"famed sweet-mystery-of-life passage" -- but Kennedy is
so proud of it that he repeated it in his sodomy opinion.

This kind of reasoning, to call it that, can lead
anywhere. If abortion is somehow an extension of a right
to define the universe, Scalia is quite sensible to
apprehend the future applications of a "right" to sodomy.
The lower courts teem with Anthony Kennedys; a Canadian
court has just ruled that the law must recognize
"marriage" between people of the same sex. It can happen
here, and probably will.

What's so appalling about O'Connor and Kennedy is
the utter triteness of their minds. They seem to have
studied metaphysics at the feet of Hugh Hefner, yet they
regard themselves as pioneering thinkers, philosophic
guardians of the Republic, entitled to reshape old
institutions to suit themselves. Their opinions are thick
with ill-digested cliches; and they get their cliches
from the wrong people. O'Connor claims, in the teeth of
every known opinion poll, "broad" public support for
racial preferences, and Kennedy claims an "emerging
awareness" that his benign view of homosexuality is
correct -- though, again, the polls show otherwise. Both
are avatars of what's loosely called "elite" opinion,
though the supposed elite is now a dwindling liberal
minority that still mistakes itself for an avant-garde.
One might as well seek the leaders of tomorrow in an old
folks' home.

Both rulings are nothing more than solemn judicial
whims, inspired by fading trends. In both cases narrow
majorities decided that the Court's recent interpretation
of the Fourteenth Amendment, already fantastically broad,
still isn't broad enough to suit them. It just keeps
emanating penumbras, which, as Kennedy's opinion
illustrates, are rapidly approaching infinity. No state
law is safe from the Court. The Tenth Amendment, with the
whole federal structure it expresses, is dead. Scalia
quipped that Kennedy's defining-the-universe dictum may
turn out to be "the passage that ate the rule of law."