"YOU SHALL NOT DISTORT JUSTICE; YOU SHALL NOT RESPECT PERSONS...NEITHER SHALL YOU BE PARTIAL TO A POOR MAN IN HIS DISPUTE" - DEUTERONOMY 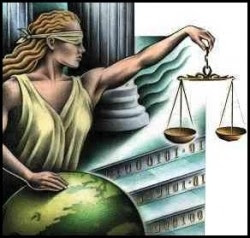 JUDICIAL DISPASSION
-- the ability to decide cases without being influenced by personal feelings or political preferences --
is indispensable to the rule of law.
So indispensable, in fact,
that the one-sentence judicial oath
required of every federal judge and justice
contains no fewer than three expressions of it:
"I . . . do solemnly swear that I will administer justice without respect to persons, and do equal right to the poor and to the rich, and that I will faithfully and impartially discharge and perform all the duties incumbent upon me . . . under the Constitution and laws of the United States, so help me God."

There are biblical echoes in the wording of that oath -- a reminder that the judge's obligation to decide cases on the basis of fact and law, without regard to the litigants' wealth or fame or social status, is a venerable moral principle.

"You shall not show partiality in judgment; you shall hear the small and the great alike," says Moses in Deuteronomy, instructing the Israelite judges. "You shall not distort justice; you shall not respect persons, and you shall not take a bribe." Elsewhere they are reminded that it is not only the rich they are forbidden to favor. "Neither shall you be partial to a poor man in his dispute," Exodus firmly warns. Judges may not bend the law, not even to help the underprivileged.

Without judicial restraint there is no rule of law. We live under "a government of laws and not of men," to quote John Adams's resonant phrase, only so long as judges stick to neutrally resolving the disputes before them, applying the law and upholding the Constitution even when doing so leads to results they personally dislike. That is why the judicial oath is so adamant about impartiality. That is why Lady Justice is so frequently depicted -- as on the sculpted lampposts outside the US Supreme Court -- wearing a blindfold and carrying balanced scales.

And that is why President Obama's "empathy" standard is so disturbing, and has generated so much comment.

Time and again, Obama has called for judges who do not put their private political views aside when deciding cases. In choosing a replacement for Justice David Souter, the president says, he will seek not just "excellence and integrity," but a justice whose "quality of empathy, of understanding and identifying with people's hopes and struggles," would be "an essential ingredient" in his jurisprudence. In an interview last year, he said he would look for judges "sympathetic" to those "on the outside, those who are vulnerable, those who are powerless."

When he voted AGAINST [emphasis added] the confirmation of Chief Justice John Roberts in 2005, Obama declared that the "truly difficult" cases that come before the Supreme Court can be decided only with reference to "the depth and breadth of one's empathy," and that "the critical ingredient is supplied by what is in the judge's heart."

But such cardiac justice is precisely what judges "do solemnly swear" to renounce. Sympathy for others is an admirable virtue, but a judge's private commiserations are not relevant to the law he is expected to apply.

If Obama means what he says, he wants judges who can be counted on to violate their oath of office.

"We need somebody who's got the heart -- the empathy -- to recognize what it's like to be a young teenage mom," he told a Planned Parenthood conference in 2007. "The empathy to understand what it's like to be poor or African-American or gay or disabled or old. And that's the criteria by which I'm going to be selecting my judges."

With such criteria, what would remain of the rule of law? What would happen to "Equal Justice Under Law," which is carved above the Supreme Court's entrance? What would be left of the 14th Amendment's guarantee of "equal protection of the laws" to every citizen?

Lady Justice wears a blindfold not because she has no empathy for certain litigants or groups of people, but because there is no role for such empathy in a courtroom. "Our constitution is color-blind," wrote Supreme Court Justice John Marshall Harlan, in his great dissent in Plessy v. Ferguson, "and neither knows nor tolerates classes among citizens." Harlan had supported slavery; he believed whites were superior to nonwhites. He had his empathies, but he confined his judging to the law.
---
Lady Justice's blindfold
by Jeff Jacoby
The Boston Globe
May 10, 2009
http://www.jeffjacoby.com/5568/lady-justices-blindfold
(Jeff Jacoby is a columnist for The Boston Globe.)