It marked a miserable end to a calamitous year in which an estimated 4.2 million American jobs were liquidated, and the unemployment rate rose to 10 percent. In addition, more than 920,000 "discouraged workers" left the labor force entirely, having given up on finding work and therefore not included in official unemployment data.

Meanwhile, millions of Americans who do have jobs have been compelled to work part-time or at reduced wages; many others have not seen a raise in years.

But not everyone is having a rotten recession. 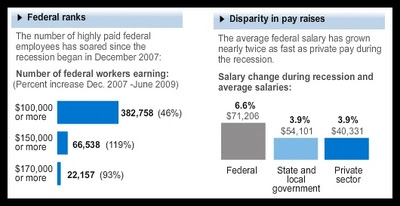 Since December 2007, when the current downturn began, the ranks of federal employees earning $100,000 and up has skyrocketed. According to a recent analysis by USA Today, federal workers making six-figure salaries – not including overtime and bonuses -- "jumped from 14 percent to 19 percent of civil servants during the recession's first 18 months." The surge has been especially pronounced among the highest-paid employees. At the Defense Department, for example, the number of civilian workers making $150,000 or more quintupled from 1,868 to 10,100. At the recession's start, the Transportation Department was paying only one person a salary of $170,000. Eighteen months later, 1,690 employees were drawing paychecks of that size.

All the while, the federal government has been adding jobs at a 10,000-a-month clip. Between December 2007 and June 2009, federal payrolls exploded by nearly 10 percent. "Federal workers are enjoying an extraordinary boom time in pay and hiring," USA Today observes, "during a recession that has cost 7.3 million jobs in the private sector." And to add public-sector insult to the private-sector injury, data from the Office of Personnel Management show the average federal salary is now roughly $71,000 -- about 76 percent higher than the average private employee earns. (If benefits are included, the disparity is even greater.)

Needless to say, it isn't only at the federal level that government pay and perks increasingly outstrip those in the private sector. In states and municipalities across the country, public-employee pension costs are going through the roof.

In Ohio, a joint reporting effort by the state's eight largest newspapers found that even in a time of severe budget cuts, "one expense government leaders have not cut is pensions for their workers." The annual public pension tab in Ohio, currently $4.1 billion, is growing by around $700 million per year. "Retirement incomes for the most experienced government employees top out at 88 percent of their active-duty pay," writes James Nash of the Columbus Dispatch. "Unlike most private-sector workers, whose retirement is driven by the strength of the stock market and 401(k) plans, government employees' pensions are guaranteed."

Moreover, government retirees in Ohio enjoy taxpayer-provided health care, and in many cases can retire at age 48. Especially egregious are the "double-dippers" -- public employees who "retire" on a full pension while returning to work and collecting a paycheck. In 2009, double-dippers were paid nearly a billion dollars by Buckeye State public-pension systems. 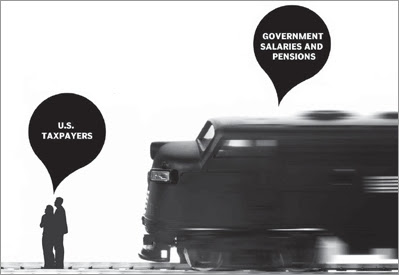 Ohio is hardly unique. A public-pension tsunami is beginning to inundate government budgets at every level. As more and more of taxpayers' earnings are confiscated to fund outsize public-sector benefits, the backlash from the private sector will only grow angrier and more intense.

"We are about to get run over by a locomotive," warned California Governor Arnold Schwarzenegger in his State of the State address this month. Over the past decade, he told lawmakers, pension costs for state employees swelled 2000 percent -- but revenues only increased 24 percent. The state has had to come up with funds to close that gap -- funds diverted from "our universities, our parks, and other government functions."

Public-employee unions fiercely defend their members' pay and pensions, of course, but even labor-friendly Democrats are starting to acknowledge the inevitable. "The deal used to be that civil servants were paid less than private sector workers in exchange for an understanding that they had job security for life," former San Francisco mayor and California Assembly speaker Willie Brown recently wrote in the San Francisco Chronicle. "But we politicians, pushed by our friends in labor, gradually expanded pay and benefits . . . while keeping the job protections and layering on incredibly generous retirement packages. . . . Talking about this is politically unpopular and potentially even career suicide for most officeholders. But at some point, someone is going to have to get honest about the fact."

A showdown is coming, and more likely sooner than later. Taxpayers will put up with a lot, but their patience has its limits.