WHAT THE MASSACHUSETTS ELECTION REALLY MEANS 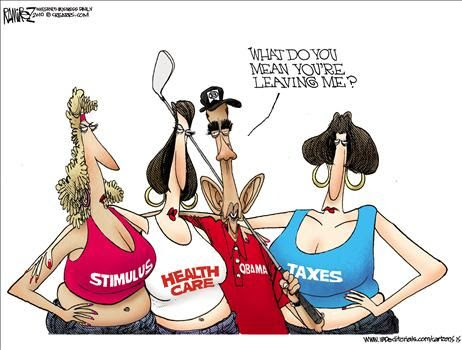 On Jan. 14, five days before the Massachusetts special election, President Obama was in full bring-it-on mode as he rallied House Democrats behind his health care overhaul.

"If Republicans want to campaign against what we've done by standing up for the status quo and for insurance companies over American families and businesses, that is a fight I want to have."

The bravado lasted three days. When Obama campaigned in Boston on Sunday for ObamaCare supporter Martha Coakley, not once did he mention the health care bill. When your candidate is sinking, you don't throw her a millstone.

After Coakley's defeat, Obama pretended that the real cause was a generalized anger and frustration "not just because of what's happened in the last year or two years, but what's happened over the last eight years."

Let's get this straight: The antipathy to George W. Bush is so enduring and powerful that ... it just elected a Republican senator in Massachusetts? Why, the man is omnipotent.

And the Democrats are delusional: Scott Brown won by running against Obama, not Bush. He won by brilliantly nationalizing the race, running hard against the Obama agenda, most notably ObamaCare. Killing it was his No. 1 campaign promise.

An astonishing 56% of Massachusetts voters, according to Rasmussen, called health care their top issue. In a Fabrizio, McLaughlin & Associates poll, 78% of Brown voters said their vote was intended to stop ObamaCare. Only a quarter of all voters in the Rasmussen poll cited the economy as their top issue, nicely refuting the Democratic view that Massachusetts was just the usual anti-incumbent resentment you expect in bad economic times.

These deals — the Louisiana Purchase, the Cornhusker Kickback — had engendered a national disgust with the corruption and arrogance of one-party rule. The final straw was the union payoff — in which labor bosses smugly walked out of the White House with a five-year exemption from a ("Cadillac") health insurance tax Democrats were imposing on the 92% of private-sector workers who are not unionized.

The reason both wings of American liberalism — congressional and mainstream media — were so surprised at the force of anti-Democratic sentiment is they'd spent Obama's first year ignoring or disdaining the early signs of resistance: the tea party movement of the spring and the town hall meetings of the summer.

With characteristic condescension, they contemptuously dismissed the protests as the mere excrescences of a redneck, retrograde, probably racist rabble.

You would think lefties could discern a proletarian vanguard when they see one. Yet they kept denying the reality of the rising opposition to Obama's social democratic agenda when summer turned to fall and Virginia and New Jersey turned Republican in the year's two gubernatorial elections.

The evidence was unmistakable: Independents, who in 2008 elected Obama, swung massively against the Democrats: dropping 16 points in Virginia, 21 in New Jersey.

Nor was this an expression of the more agitated elements who vote in obscure, low-turnout elections. Tuesday's turnout was the highest for any nonpresidential Massachusetts election in 20 years.

Democratic cocooners will tell themselves that Coakley was a terrible candidate who even managed to diss Curt Schilling. True, Brown had Schilling. But Coakley had Obama. When the bloody sock beats the presidential seal — of a man who had them swooning only a year ago — something is going on beyond personality.

That something is substance — political ideas and legislative agendas.

Democrats, if they wish, can write off their Massachusetts humiliation to high unemployment, to Coakley or, the current favorite among sophisticates, to generalized anger. That implies an inchoate, unthinking lashing-out at whoever happens to be in power — even at your liberal betters who are forcing on you an agenda that you can't even see is in your own interest.

Democrats must so rationalize, otherwise they must take democracy seriously and ask themselves: If the people really don't want it, could they possibly have a point?

"If you lose Massachusetts and that's not a wake-up call," said moderate — and sentient — Democratic Sen. Evan Bayh of Indiana, "there's no hope of waking up."

I say: Let them sleep.