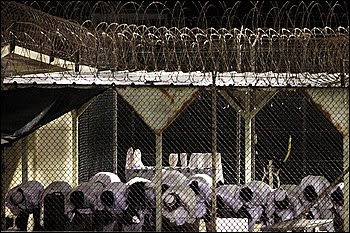 On Wednesday, Nigerian would-be bomber Umar Farouk Abdulmutallab
was indicted by a Michigan grand jury
The previous day, the State Department announced that his visa had been revoked.
The system worked.

Well, it did for Abdulmutallab.
What he lost in flying privileges he gained in Miranda rights.
He was singing quite freely when seized after trying to bring down Northwest Flight 253 over Detroit.
But the Obama administration decided to give him a lawyer and the right to remain silent.

We are now forced to purchase information from this attempted terrorist in the coin of leniency. Absurdly, Abdulmutallab is now in control.

And this is no ordinary information. He was trained by al-Qaeda in Yemen, and just days after he was lawyered up and shut up, the United States was forced to close its embassy in Yemen because of active threats from the same people who had trained and sent Abdulmutallab.
This is nuts. Even if you wanted ultimately to try him as an ordinary criminal, he could have been detained in military custody -- and thus subject to military interrogation -- without prejudicing his ultimate disposition. After all, every Guantanamo detainee was first treated as an enemy combatant and presumably interrogated. But some (most notoriously Khalid Sheik Mohammed) are going to civilian trial. That determination can be made later.
John Brennan, President Obama's counterterrorism adviser, professes an inability to see any "downsides" to treating Abdulmutallab as an ordinary criminal -- with a right to remain silent -- a view with which 71 percent of likely voters sensibly disagree.
The administration likes to defend itself by invoking a Bush precedent: Wasn't the shoe bomber treated the same way?
Yes. And it was a mistake, but in the context of the time understandable. That context does not remotely exist today.
Richard Reid struck three months after 9/11. The current anti-terror apparatus was not in place. Remember: This was barely a month after President Bush authorized the creation of military commissions and before that system had been even set up. Moreover, the Pentagon at the time was preoccupied with the Afghan campaign that brought down the Taliban in two months. The last major Taliban city, Kandahar, fell just two weeks before Reid tried to ignite his shoe on an airplane.


To be sure, after a few initial misguided statements, Obama did get somewhat serious about the Christmas Day attack. First, he instituted high-level special screening for passengers from 14 countries, the vast majority of which are Muslim with significant Islamist elements. This is the first rational step away from today's idiotic random screening and toward, yes, a measure of profiling -- i.e., focusing on the population most overwhelmingly likely to be harboring a suicide bomber.
Obama also sensibly suspended all transfers of Yemenis from Guantanamo. Nonetheless, Obama insisted on repeating his determination to close the prison, invoking his usual rationale of eliminating a rallying cry and recruiting tool for al-Qaeda.
Imagine that Guantanamo were to disappear tomorrow, swallowed in a giant tsunami. Do you think there'd be any less recruiting for al-Qaeda in Yemen, Saudi Arabia, Pakistan, London?
Jihadism's list of grievances against the West is not only self-replenishing but endlessly creative. Osama bin Laden's 1998 fatwa commanding universal jihad against America cited as its two top grievances our stationing of troops in Saudi Arabia and Iraqi suffering under anti-Saddam sanctions.
Today, there are virtually no U.S. troops in Saudi Arabia. And the sanctions regime against Iraq was abolished years ago. Has al-Qaeda stopped recruiting? Ayman al-Zawahiri, al-Qaeda's No. 2, often invokes Andalusia in his speeches. For those not steeped in the multivolume lexicon of Islamist grievances, Andalusia refers to Iberia, lost by Islam to Christendom -- in 1492.
This is a fanatical religious sect dedicated to establishing the most oppressive medieval theocracy and therefore committed to unending war with America not just because it is infidel but because it represents modernity with its individual liberty, social equality (especially for women) and profound tolerance (religious, sexual, philosophical). You going to change that by evacuating Guantanamo?
Nevertheless, Obama will not change his determination to close Guantanamo. He is too politically committed. The only hope is that perhaps now he is offering his "recruiting" rationale out of political expediency rather than real belief. With suicide bombers in the air, cynicism is far less dangerous to the country than naivete.