THE OBAMACARE BILL: THE LEGISLATIVE PROCESS TURNED ON ITS HEAD 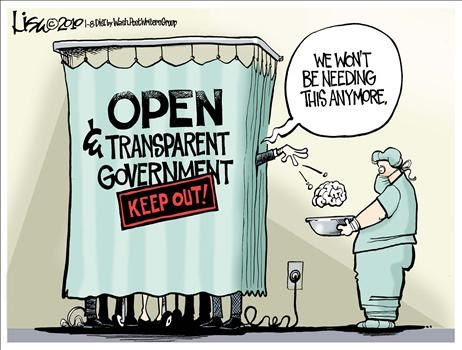 After much bribery and arm-twisting,
the Senate managed just before Christmas to pass its version of ObamaCare by a 60-39 vote (amazingly, without a single GOP "aye").

Democrats let slip this week that there would be no typical conference committee on the competing House and Senate versions of the health bill, as "leaders" opted instead for private negotiations with "key" congressmen and senators, none of whom is Republican. Once an agreement is reached, each legislative chamber will vote again and send the unified bill to the president.

Without a conference committee, a rule requiring public access to the conference report for at least 48 hours before a vote would conveniently not apply. That means even more liberty-stealing treachery can be slipped into the bill with little notice. Funny how the "public option" doesn't mean that the public gets to know what's in the bill.

House Speaker Nancy Pelosi (D-CA) nevertheless had the gall to declare, "There has never been a more open process for any legislation in anyone who's served here's experience." In response, Wall Street Journal columnist James Taranto mocked, "Has a more false or awkwardly worded statement ever come out of anyone who has served as speaker of the House's mouth?"

In spite of Democrats' best efforts at "transparency," there are many extra-special things that we actually do know about the bill. For example, on page 1,020, the Senate bill states: "It shall not be in order in the Senate or the House of Representatives to consider any bill, resolution, amendment or conference report that would repeal or otherwise change this subsection." In other words, the bill creates an eternal law by prohibiting future elected Congresses from making changes to this subsection.

What's in the subsection in question? The infamous "death panel" -- the Independent Medicare Advisory Board (IMAB), whose objective will be to "reduce the per capita rate of growth in Medicare spending" (read: to ration health care).

Meanwhile, the bill contains what amounts to a marriage penalty worth $2,000 or more in insurance premiums each year. The Wall Street Journal explains, "The disparity comes about in part because subsidies for purchasing health insurance under the plan from congressional Democrats are pegged to federal poverty guidelines. That has the effect of limiting subsidies for married couples with a combined income, compared to if the individuals are single."

Finally, Obama signaled this week that he's willing to break another campaign promise: The "no tax increases on the middle class" pledge. He threw his support behind the Senate's tax on higher end "Cadillac" insurance plans, something unions and House Democrats oppose.

The more the public learns about this continuing saga, the more vigorously opposed they become to "reform." No wonder Democrats want the process to remain secret.

"I want the negotiations to be taking place on C-SPAN." --Barack Obama, May 2008

"We will work on this process publicly. It'll be on C-SPAN. It will be streaming over the Net." --Barack Obama, November 2008

Democrat 'Constitutional Scholars' at It Again

Ah, yes, "case law." That's code for amending our Constitution by judicial diktat rather than via its prescribed method as stated in Article V.

This week, Gibbs reiterated, "I do not believe that anybody has legitimate constitutional concerns about the [health care] legislation."

Furthermore, when asked where the authority to mandate that Americans buy health insurance -- that they be forced under penalty of fine or imprisonment to engage in a particular commercial enterprise -- is located in the Constitution, Sen. Diane Feinstein (D-CA) answered, "Well, I would assume it would be in the Commerce clause of the Constitution. That's how Congress legislates all kinds of various programs."

Congress too often uses this clause to do whatever it wants to do (the legislative target might, just might, some day engage in interstate commerce, don't you know,) but this incorrect interpretation certainly doesn't make this legislation constitutional.

Quote of the Week

"America's founders intended the federal government to have limited powers and that the states have an independent sovereign place in our system of government. The Obama/Reid/Pelosi legislation to take control of the American health-care system is the most sweeping and intrusive federal program ever devised. If the federal government can do this, then it can do anything, and the limits on government power that our liberty requires will be more myth than reality." --Wall Street Journal op-ed by Sen. Orrin Hatch (R-UT), Liberty University School of Law professor Kenneth Blackwell and American Civil Rights Union senior legal analyst Kenneth Klukowski