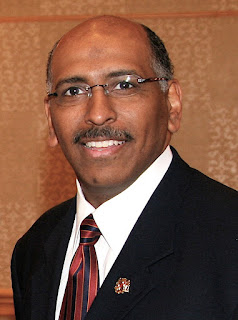 Republican National Committee Chairman Michael S. Steele,
under fire this week for a string of controversial statements
he has made while promoting his new book,
has so angered the party's congressional leaders
that their aides said they told Steele's handlers to "get him to stop."

Steele, who has been making regular television appearances, said Monday that he did not believe Republicans could win back their congressional majorities in 2010. "Not this year," Steele told Fox News Channel, saying he was just beginning to look at races, even though the party has been recruiting candidates for many months.
Believing that Steele's off-the-cuff remarks threaten to damage the party's brand -- at the very time when Republicans are trying to capitalize on a national political environment that may hurt Democrats -- senior aides to top Republican leaders confronted Steele's staff on a conference call Wednesday.
"You really just have to get him to stop. It's too much," a top congressional aide said on the call, according to others on the call, adding that Steele was hurting morale among Republican members of Congress and candidates.
The call turned into "a bickering match," aides said Thursday, as one top congressional staffer accused Steele of launching "a Republican apology tour at the exact wrong time." Another congressional aide said Steele was appearing on television "unprepared and unknowledgeable."
Steele's aides said on the call that their boss had hired an outside public relations firm to handle his book promotions and acknowledged that they have "no control" over booking his interviews or what he says in them. They noted that Steele had dialed back his comments about Republicans' chances in 2010 on Tuesday by telling MSNBC that he is "playing to win."
The call came as discontent with Steele seems to be spreading among some major GOP donors, who have publicly questioned whether the party chairman is focusing more on his own image -- delivering paid speeches and promoting his book, "Right Now: A 12-Step Program for Defeating the Obama Agenda" -- than on rebuilding the party and helping its candidates. The Washington Times reported Thursday that some prominent party fundraisers are withholding donations from the RNC because of unhappiness with Steele.
"It's real," a GOP strategist, speaking only on the condition of anonymity, said of the donor frustration.
Steele's spokeswoman did not return a call for comment Thursday. But in an interview Thursday, Steele lashed back at his Republican critics by telling them to "shut up."
"I tell them to get a life," Steele told ABC News Radio. "I'm looking them in the eye and say, 'I've had enough of it. If you don't want me in the job, fire me. But until then, shut up. Get with the program or get out of the way.' "
Former House Speaker Newt Gingrich (R-Ga.) came to Steele's defense Thursday, telling a group of reporters in Atlanta that he is "a fan of Steele's" even though the chairman "makes a number of old-time Republicans very nervous."
"He comes out of a different background," Gingrich said, according to the Associated Press. " . . . But I think he's pretty close to what we need. He's different, he's gutsy and he's going to make a number of Republicans mad."
Democrats have seized on Steele's statements. The Democratic National Committee circulated an e-mail to reporters late Thursday titled, "Spiraling OUT-OF-CONTROL!!" And DNC spokesman Brad Woodhouse called Steele "the gift that keeps on giving."
"If there is a move afoot to get rid of him, we would not at all be in favor of that," Woodhouse said. "In all seriousness, the Republican Party has got bigger problems than Michael Steele."
Of the public criticism, Steele said his fellow Republicans should "cut it out."
"All I'm saying is 'cut it out,' " Steele told ABC. "If we have party differences that are inside the party, let's deal with them inside the party. You don't see the Democrats running around trying to beat up their national chairman or embarrass him."