IS MASSACHUSETTS ABOUT TO BE SAVED FROM THE KENNEDY SCOURGE? 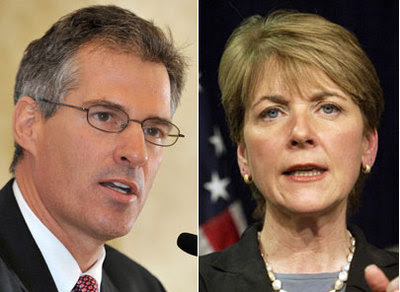 Republican Scott Brown and Democrat Martha Coakley are running for the US Senate seat long occupied by Ted Kennedy.

THE POLICY DIFFERENCES between Democrat Martha Coakley and Republican Scott Brown were as clear during last night's debate as they have been throughout this short special-election campaign.

Coakley supports ObamaCare, opposes the war in Afghanistan, and favors higher taxes on the wealthy. Brown is against the health-care legislation, backs the president's troop surge in Afghanistan, and wants across-the-board tax cuts à la JFK. Coakley is an EMILY's List pro-choice hardliner; Brown condemns partial-birth abortion and is backed by Massachusetts Citizens for Life. Coakley has no problem with civilian trials for the likes of 9/11 mastermind Khalid Sheikh Mohammed. Brown thinks it reckless to treat enemy combatants as if they were ordinary defendants.

But the most striking thing about the final televised debate before next Tuesday's election was not that the very liberal Democrat and the not-especially-conservative Republican disagreed on the issues. It is that they are both viable candidates in a US Senate race too competitive to call. In Massachusetts!

When Ted Kennedy died less than six months ago, who would have guessed that the contest to win the seat he occupied for 47 years would be anything but a slam-dunk for the Democratic nominee? Yet there was no slam-dunk on that stage last night, and the race certainly doesn't feel like a slam-dunk now.

"It's not the 'Kennedy Seat,'" Brown has been reminding Coakley. "It's not the Democrats' seat. It's the people's seat." Amazing thing is, he could be right.

IT'S THE PEOPLE'S SEAT

When Democrats aren't raising the specter of the unpopular Bush administration, they're trying to tie Mr. Brown to Sarah Palin. The Democratic National Committee dispatched its top political spin artist, Hari Sevugan, to Massachusetts yesterday to help out the struggling Coakley campaign. He promptly sent out an email taunting Ms. Palin for not coming to Massachusetts to endorse Mr. Brown: "Come on, Sarah, why are you being so shy?" Within hours, he sent out another message headlined: "Has the Pit Bull lost her bark?" A third salvo late in the day demanded that reporters ask Mr. Brown a simple question: "Will you accept Sarah Palin's endorsement or won't you?"

There was no discussion of issues from Mr. Sevugan, much less any evidence that Mr. Brown has ever expressed an interest in having outsiders come into the state on his behalf. Democrats have apparently decided that hauling out fright masks beats trying to defend President Obama's record, much less Ms. Coakley's conventionally liberal positions.