MASSACHUSETTS, HOME OF MANY OF THE FOUNDERS OF OUR REPUBLIC, MAY REJOIN THE UNION 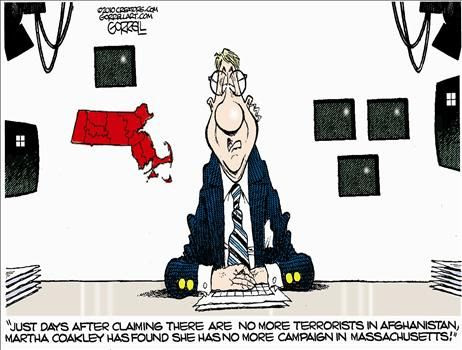 "Just days after claiming there are no more
terrorists in Afghanistan, Martha Coakley has
found that she has no more campaign in
Massachusettts."

Democratic candidate Martha Coakley has run such a clueless race for Senate in Massachusetts that Democrats are already comparing her to Creigh Deeds, their hapless nominee for governor of Virginia who lost last year in a landslide.

But other comparisons are even more cutting. Michael Barone, co-author of the Almanac of Americans Politics, wrote yesterday: "If Republican Scott Brown wins this election -- and every day his chances look better -- Democrats might conclude that Martha Coakley was a Republican plant, a Manchurian candidate inserted into the race in order to deprive Democrats of their 60th vote in the Senate."

How bad has Ms. Coakley's effort been? This week she took time off from her desultory campaigning to go to a Washington, D.C. wine bar and collect $10,000 in checks from health care lobbyists. Afterwards, an aide shoved a reporter to the ground for trying to ask the candidate a question (an action the aide has now apologized for). The Weekly Standard reporter had been trying to ask Ms. Coakley about her incredible statement in a debate this week that there were no longer any terrorists in Afghanistan.

But perhaps her worst error was appearing to have dissed baseball fans who congregate at Boston's Fenway Park, a Massachusetts shrine even in the off-season. Asked to answer charges that she wasn't campaigning hard enough, she fired back: "As opposed to standing outside Fenway Park? In the cold? Shaking hands?" (An ad for her GOP opponent Mr. Brown showed him shaking hands in front of the ballpark.)

The crack drew an instant response from former Red Sox star Curt Schilling, who attacked Ms. Coakley for being one of those pols who are "so far out of touch with their constituents it's laughable and pathetic."

Ms. Coakley's campaign has indeed been a disaster, and that's certainly what Democrats will emphasize should she lose. Democrats will studiously ignore the fact that her cookie-cutter liberal ideas were viewed by many independents as out-of-date and conventional. Her inability to talk about issues such as jobs that are a pressing concern to voters will be every bit as much to blame as her innumerable tactical missteps.

Of course, the uber-intense Massachusetts Senate race is about health care and the fact that a victory by Scott Brown would give the GOP the 41st vote to stop the bill now before Congress -- a bill that a new Suffolk University poll shows is opposed by 51% of Massachusetts residents.

But many other factors explain why Bay State voters -- especially independents -- are mad as hell and joining a "pitchfork populist" revolution fueling the Brown candidacy.

A Boston Globe poll found that, by 49% to 45%, independent voters feel that Democratic domination of all levers of power in the state is a problem. The check on political arrogance and corruption that competitive elections create in many states is pretty much non-existent in Massachusetts. Three successive speakers of the Massachusetts House have been convicted of crimes in recent years. Undercover tapes recently showed a Boston state legislator stuffing a bribe into her bra. Then there's Boston's Big Dig construction project, which has featured numerous horror stories of corruption.

If that weren't enough, much of the establishment's political arrogance has been focused directly on voters. The state legislature ignored hundreds of thousands who signed petitions to place a referendum on gay marriage on the ballot by simply running out the clock and refusing to allow it to go before the electorate. After Senator Ted Kennedy died, the legislature also changed state law in a matter of days to allow the sitting Democratic Gov. Deval Patrick to appoint an interim Senator -- a Kennedy family retainer named Paul Kirk -- so Democrats would have the 60 needed votes to pass health care without Massachusetts voters getting in the way.

Democrats have also reacted badly to the Brown surge in the polls. Senator Kirk ignored specific instructions from the legislature that approved his appointment when he endorsed Ms. Coakley in the race. Senator Kirk also announced he would vote for the ObamaCare bill even if Mr. Brown wins on Tuesday and is on the brink of being sworn in. Likewise, Secretary of State William Galvin, Massachusetts' top election official, told a Boston paper that certification of a Brown victory could be delayed until mid-February to permit Mr. Kirk to vote on health care.

No wonder Mr. Brown has made headway by arguing he's running against "the machine" in the Bay State. The American Revolution began in Massachusetts. Democrats, who have adopted a royalist entitlement mentality towards their political power there, seem to have forgotten that and are now facing a sudden uprising by a rebel army called the voting public.