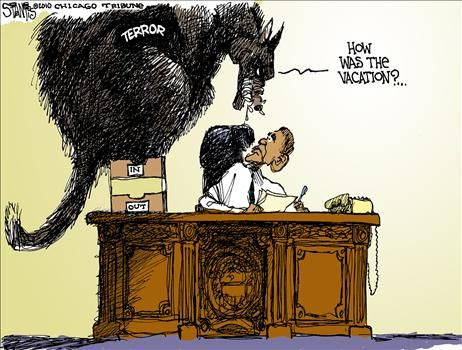 What went wrong?
A year ago, he was king of the world.
Now President Obama's approval rating, according to CBS, has dropped to 46 percent
-- and his disapproval rating is the highest ever recorded by Gallup
at the beginning of an (elected) president's second year.
A year ago, he was leader of a liberal ascendancy that would last 40 years (James Carville). A year ago, conservatism was dead (Sam Tanenhaus). Now the race to fill Ted Kennedy's Senate seat in bluest of blue Massachusetts is surprisingly close, with a virtually unknown state senator bursting on the scene by turning the election into a mini-referendum on Obama and his agenda, most particularly health-care reform.
A year ago, Obama was the most charismatic politician on Earth. Today the thrill is gone, the doubts growing -- even among erstwhile believers.
Liberals try to attribute Obama's political decline to matters of style. He's too cool, detached, uninvolved. He's not tough, angry or aggressive enough with opponents. He's contracted out too much of his agenda to Congress.
These stylistic and tactical complaints may be true, but they miss the major point: The reason for today's vast discontent, presaged by spontaneous national Tea Party opposition, is not that Obama is too cool or compliant but that he's too left.
It's not about style; it's about substance. About which Obama has been admirably candid. This out-of-nowhere, least-known of presidents dropped the veil most dramatically in the single most important political event of 2009, his Feb. 24 first address to Congress. With remarkable political honesty and courage, Obama unveiled the most radical (in American terms) ideological agenda since the New Deal: the fundamental restructuring of three pillars of American society -- health care, education and energy.
Then began the descent -- when, more amazingly still, Obama devoted himself to turning these statist visions into legislative reality. First energy, with cap-and-trade, an unprecedented federal intrusion into American industry and commerce. It got through the House, with its Democratic majority and Supreme Soviet-style rules. But it will never get out of the Senate.
Then, the keystone: a health-care revolution in which the federal government will regulate in crushing detail one-sixth of the U.S. economy. By essentially abolishing medical underwriting (actuarially based risk assessment) and replacing it with government fiat, Obamacare turns the health insurance companies into utilities, their every significant move dictated by government regulators. The public option was a sideshow. As many on the right have long been arguing, and as the more astute on the left (such as The New Yorker's James Surowiecki) understand, Obamacare is government health care by proxy, single-payer through a facade of nominally "private" insurers.
At first, health-care reform was sustained politically by Obama's own popularity. But then gravity took hold, and Obamacare's profound unpopularity dragged him down with it. After 29 speeches and a fortune in squandered political capital, it still will not sell.
The health-care drive is the most important reason Obama has sunk to 46 percent. But this reflects something larger. In the end, what matters is not the persona but the agenda. In a country where politics is fought between the 40-yard lines, Obama has insisted on pushing hard for the 30. And the American people -- disorganized and unled but nonetheless agitated and mobilized -- have put up a stout defense somewhere just left of midfield.
Ideas matter. Legislative proposals matter. Slick campaigns and dazzling speeches can work for a while, but the magic always wears off.
It's inherently risky for any charismatic politician to legislate. To act is to choose and to choose is to disappoint the expectations of many who had poured their hopes into the empty vessel -- of which candidate Obama was the greatest representative in recent American political history.
Obama did not just act, however. He acted ideologically. To his credit, Obama didn't just come to Washington to be someone. Like Reagan, he came to Washington to do something -- to introduce a powerful social democratic stream into America's deeply and historically individualist polity.
Perhaps Obama thought he'd been sent to the White House to do just that. If so, he vastly over-read his mandate. His own electoral success -- twinned with handy victories and large majorities in both houses of Congress -- was a referendum on his predecessor's governance and the post-Lehman financial collapse. It was not an endorsement of European-style social democracy.
Hence the resistance. Hence the fall. The system may not always work, but it does take its revenge.
One year out: President Obama's fall
By Charles Krauthammer
Friday, January 15, 2010