HARRY REID IS NOT A RACIST, ITS JUST THAT HE THINKS EVERYONE ELSE IS A RACIST

YOU CAN WRITE A CHECK to the United Negro College Fund. You can sow off your collection of Negro Leagues baseball cards. You can discourse learnedly on the significance of the "magical negro" in film and fiction, identify yourself as "Negro" on the 2010 Census, or register for a course on Negro spirituals. 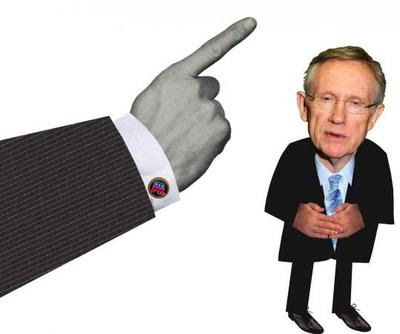 But you cannot talk up the presidential prospects of a biracial US senator by expressing the opinion that American voters would embrace a "light-skinned" African American who speaks "with no Negro dialect, unless he wanted to have one."

Is that the lesson we're supposed to learn from Harry Reid's racial imbroglio?

The Senate Majority Leader made those comments in 2008, in the course of privately telling fellow Democrats why he thought Barack Obama should run for president. When his remarks, quoted in Game Change, a new book on the 2008 presidential campaign, became public over the weekend, Reid immediately apologized for "using such a poor choice of words" and "for offending any and all Americans, especially African-Americans."

But how many Americans are really offended -- genuinely upset -- by Reid's admittedly "poor choice of words"? Granted, the word "negro" has long been politically incorrect, but Reid is 70 years old and the speech habits of a lifetime can be hard to break, especially when speaking in private. Granted, too, that a political figure today would have to be remarkably obtuse to discuss publicly whether a black candidate might benefit from being light-skinned or able to turn a "blaccent" on and off at will. But is anyone shocked to learn that there are practical politicians who weigh such factors when talking behind closed doors?

Nevertheless, the news of Reid's gaffe had no sooner broken than some Republicans were reaching for feathers and hot tar. "These are clearly racist comments," Liz Cheney declared on ABC's "This Week" program. Frances Rice, the chairman of the National Black Republican Association, quickly distributed a screed titled "Harry Reid Must Resign!" At PowerLine, a widely-read conservative blog, John Hinderaker fumed over Reid's "absurdly racist comments about Barack Obama."

Before the weekend was out, Texas Senator John Cornyn, who heads the National Republican Senatorial Committee, had called on Reid to step down. So had GOP Chairman Michael Steele, who decried the double standard by which an apology suffices "when Democrats get caught saying racist things," while a Republican's racial blunder becomes a hanging offense.

The plain fact, however, is that Reid didn't "get caught saying racist things." He got caught presuming that most Americans are racial bigots. He got caught in the condescending attitude that white voters are so biased that they will refuse to vote for a candidate because of the color of his skin. He got caught, in other words, peddling the lie that America is still a racist nation.

The real trouble with Harry isn't that he's a racist. It's that he is so quick to hang that label on others -- particularly others who don't share his liberal views.

In 2006, for example, Reid took to the Senate floor to denounce legislation declaring English the national language of the United States. "This amendment is racist," he barked, thereby slandering not only the 63 senators who voted for it, but the large majority of Americans who agreed with them.

Just last month, Reid likened Republicans who oppose Democratic health-care legislation to the 19th-century white supremacists who supported black slavery. "If you think you've heard these same excuses before, you're right," Reid said. "When this country belatedly recognized the wrongs of slavery, there were those who dug in their heels and said 'Slow down. It's too early. Let's wait.'"

It isn't Reid's "poor choice of words" that is so scandalous; it is his willingness to fan racial resentment for partisan political purposes. It is not for using the archaic word "Negro" that Reid owes his countrymen an apology; it is for practicing the archaic identity politics that insists on sorting Americans by race, class, and gender, rather than judging them on the basis of character and integrity.

Politics is rough-and-tumble, but some things should be beyond the pale. The use of racism as a tactic is one of them. Americans can live with a Senate leader who comments privately on a candidate's "Negro dialect." A leader who casually paints his political opponents as racists is – or should be -- a different matter entirely.

"We can think of several reasons for Harry Reid to resign as Senate Majority Leader, though the flap over his obtuse racial comments isn't one of them. The uproar is nonetheless instructive about the perils of identity politics. Mr. Reid is apologizing to all and sundry for saying in private in 2008 that Barack Obama should run for President because he was 'light-skinned' and spoke with 'no Negro dialect, unless he wanted to have one.' Republicans are calling for Mr. Reid to resign, on grounds of the Trent Lott precedent. When the Republican leader in 2002 joked at a birthday party for Strom Thurmond that America might have been better off had the one-time Dixiecrat won his 1948 Presidential campaign, Democrats demanded Mr. Lott's resignation. An Illinois state senator with a big political future went so far as to suggest at the time that Republicans needed to 'drive out' Mr. Lott in order to 'stand for something.' Mr. Lott resigned, notwithstanding his profuse apologies. In contrast, Mr. Obama and various black Democrats have rushed to Mr. Reid's defense. ... In any event, this is hardly Mr. Reid's worst rhetorical offense. That prize goes to his all too public comments in April 2007 that 'the war is lost' in Iraq, even as the surge was finally making victory possible. That was a betrayal of American soldiers risking their lives in Iraq, and to the extent it emboldened the enemy, it may have cost American lives. If Mr. Reid has apologized for that defeatism, we don't recall it. That's reason enough to resign." --The Wall Street Journal

Race bait: "[Harry Reid] was wowed by Obama's oratorical gifts and believed that the country was ready to embrace a black presidential candidate, especially one such as Obama -- a 'light-skinned' African American 'with no Negro dialect, unless he wanted to have one,' as he said privately." --excerpt from the book "Game Change," by journalists John Heilemann and Mark Halperin

But back then: "If you tell ethnic jokes in the back room, it's that much easier to say ethnic things publicly. I've always practiced how I play." --Harry Reid in 2002 after Trent Lott's resignation from leadership after similar racially insensitive remarks

Circling the wagons: "I don't know why people are making such a fuss about this. What is the big fuss about the word 'Negro'? I support the United Negro College Fund. I support the National Council of Negro Women. We still use those two terms because they have been a part of our history for a long time. So I don't know what all this fuss is about." --Rep. James Clyburn, former Chair of the Congressional Black Caucus and current House Majority Whip

"Senator Reid's record provides a stark contrast to actions of Republicans to block legislation that would benefit poor and minority communities -- most recently reflected in Republican opposition to the Health Bill now under consideration." --Rep. Barbara Lee (D-CA), Chair of the Congressional Black Caucus

More deep thoughts: "A few years ago, this guy would have been getting us coffee." --Bill Clinton in 2008, as reported in "Game Change"

You don't say: "This is far from a perfect piece of legislation." --Sen. Chris Dodd (D-CT) on the health care bill

Hope 'n' Change: "The jobs numbers are reminder that the road to recovery is never straight." --Barack Obama (The road has been straight ... down. The U.S. lost another 85,000 jobs in December.)

Too much information: "I'm not worried about them touching my private parts." --Sen. Carl Levin (D-MI) on airport screening procedures

"White liberals have built a political culture that is little different from the plantations of another generation. African-Americans are given just enough to help them survive, but not opportunity which will allow them to escape and become independent of government programs." --columnist Cal Thomas

"We know two thousand pages of 'gov-speak' is one of the largest compendiums of bribes, favors and pork ever devised. We know that in all two thousand pages, there's not a single word about tort reform because the Democratic party is owned by the trial lawyers. We know the overwhelming majority of Congress won't even bother to read the bill before voting on it. And above all, we know the very same people who are foisting this boondoggle on the rest of us will never be subjected to its mandates, because they have their own Rolls Royce health care coverage. ... 2010 can't come soon enough." --columnist Arnold Ahlert

"The special deals and payoffs are incidental to the [health care] bill in one sense; if they were all removed it would still be a bad bill. But in another sense, they reveal something essential about a government takeover of health care: it is all about looting, about how one group of people can tax and regulate others in an attempt to get something for nothing. All statist programs are rife with this kind of scheming, and they have to be, because whenever wealth is seized by force, there is a battle among the looters over how to divide the spoils." --columnist Robert Tracinski

"The White House is ... being completely dismissive ... concerning legitimate questions about the constitutionality of Obamacare. Consider this: No fewer than 13 state attorneys general signed a letter to House Speaker Nancy Pelosi and Senate Majority Leader Harry Reid, expressing their 'grave concern' over the constitutionality of one provision of the bill. This provision would cause the federal government to grant special favors to Nebraska (subsidizing its Medicaid costs) pursuant to the Democrats' bribe to secure Sen. Ben Nelson's support. ... How did the White House respond when asked about this letter? Well, White House press secretary Robert Gibbs, after admitting he hadn't even read the letter, said, 'I do not believe that anybody has legitimate constitutional concerns about the legislation.' That settles it then. Chief Justice Gibbs has spoken." --columnist David Limbaugh

"The most startling news since Barack Obama's colossal victory over Hillary Clinton in Iowa was the Democratic poll in Massachusetts the other day showing the little-known Republican Scott Brown beating the state's attorney general, Martha Coakley, in the special contest for the late Ted Kennedy's Senate seat by a point. A subsequent poll by the Boston Globe had the Democrat winning by 15. Somebody is very wrong here, obviously, and we won't know until next Tuesday's election which poll got the Massachusetts electorate right. But if the Democratic poll is closer to the truth, and if Coakley can't come up with something to pull Brown's numbers down over the next week, she is going to lose and a Republican is going to win an ineffable symbolic victory against Barack Obama and especially against health care." --columnist John Podhoretz