DESPITE OBAMA'S AND THE MAIN STREAM MEDIA'S OPPOSITION, GEORGE BUSH WENT ON TO CREATE A SMALL MIRACLE IN THE HEART OF THE ARAB MIDDLE EAST 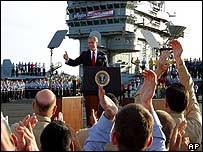 Preoccupied as it was poring through Tom Daschle's tax returns, Washington hardly noticed a near-miracle abroad. Iraq held provincial elections. There was no Election Day violence. Security was handled by Iraqi forces with little U.S. involvement. A fabulous bazaar of 14,400 candidates representing 400 parties participated, yielding results highly favorable to both Iraq and the United States.

Prime Minister Nouri al-Maliki went from leader of a small Islamic party to leader of the "State of the Law Party," campaigning on security and secular nationalism. He won a smashing victory. His chief rival, a more sectarian and pro-Iranian Shiite religious party, was devastated. Another major Islamic party, the pro-Iranian Sadr faction, went from 11 percent of the vote to 3 percent, losing badly in its stronghold of Baghdad. The Islamic Fadhila party that had dominated Basra was almost wiped out.

The once-dominant Sunni party affiliated with the Muslim Brotherhood and the erstwhile insurgency was badly set back. New grass-roots tribal ("Awakening") and secular Sunni leaders emerged.

All this barely pierced the consciousness of official Washington. After all, it fundamentally contradicts the general establishment/media narrative of Iraq as "fiasco."

One leading conservative thinker had concluded as early as 2004 that democracy in Iraq was "a childish fantasy." Another sneered that the 2005 election that brought Maliki to power was "not an election but a census" -- meaning people voted robotically according to their ethnicity and religious identity. The implication being that these primitives have no conception of democracy, and that trying to build one there is a fool's errand.

What was lacking in all this condescension is what the critics so pride themselves in having -- namely, context. What did they expect in the first elections after 30 years of totalitarian rule that destroyed civil society and systematically annihilated any independent or indigenous leadership? The only communal or social ties remaining after Saddam Hussein were those of ethnicity and sect.

But in the intervening years, while the critics washed their hands of Iraq, it began developing the sinews of civil society: a vibrant free press, a plethora of parties, the habits of negotiation and coalition-building. Reflecting these new realities, Grand Ayatollah Ali Sistani this time purposely and publicly backed no party, strongly signaling a return -- contra Iran -- to the Iraqi tradition of secular governance.

The big strategic winner here is the United States. The big loser is Iran. The parties Tehran backed are in retreat. The prime minister who staked his career on a strategic cooperation agreement with the United States emerged victorious. Moreover, this realignment from enemy state to emerging democratic ally, unlike Egypt's flip from Soviet to U.S. ally in the 1970s, is not the work of a single autocrat (like Anwar Sadat), but a reflection of national opinion expressed in a democratic election.

This is not to say that these astonishing gains are irreversible. There loom three possible threats: (a) a coup from a rising and relatively clean military disgusted with the corruption of civilian politicians -- the familiar post-colonial pattern of the past half-century; (b) a strongman emerging from a democratic system (Maliki?) and then subverting it, following the Russian and Venezuelan models; or (c) the collapse of the current system because of a premature U.S. withdrawal that leads to a collapse of security.

Averting the first two is the job of Iraqis. Averting the third is the job of the U.S. Which is why President Obama's reaction to these remarkable elections, a perfunctory statement noting that they "should continue the process of Iraqis taking responsibility for their future," was shockingly detached and ungenerous.

When you become president of the United States you inherit its history, even the parts you would have done differently. Obama might argue that American sacrifices in Iraq were not worth what we achieved. But for the purposes of current and future policy, that is entirely moot. Despite Obama's opposition, America went on to create a small miracle in the heart of the Arab Middle East. President Obama is now the custodian of that miracle. It is his duty as leader of the nation that gave birth to this fledgling democracy to ensure that he does nothing to undermine it.


Barack Hussein Obama aka Barry Soetoro
is not eligible to be President of the United States
because he is not a Natural Born Citizen
as required by Article Two, Section One, Clause Five
of the United States Constitution
because he was not born of TWO PARENTS
BOTH OF WHOM WERE UNITED STATES CITIZENS
at the time of his birth. His father was a citizen
of Kenya/Great Britain.
Check it out: