TOM DASCHLE'S EMBARRASSMENT OF RICHES IS A TYPICAL STORY, AND IN FACT IS THE RESULT OF THE LIBERAL IDEOLOGY HIS CRITICS HAVE BEEN PUSHING FOR DECADES. 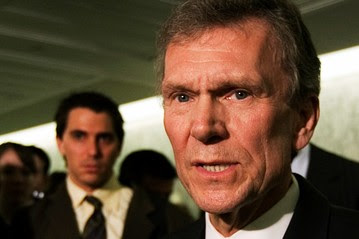 AP
Just as Tom Daschle's Senate pals were preparing to grant absolution for his six-figure tax-free limousine -- could've happened to anyone -- the former Majority Leader yesterday withdrew his nomination to be Secretary of Health and Human Services. Give Mr. Daschle credit for making the honorable choice, and sparing President Obama from a bipartisan populist revolt.

Before this episode vanishes into Beltway lore, however, it's worth drawing a few lessons. Especially because the political left seems to want to make this a morality play about Mr. Daschle's $5.2 million post-Senate windfall as lobbyist and speaking-circuit regular, notably in front of the health-care industry. Apparently these people expected Mr. Daschle to return to Sioux Falls after his 2004 re-election defeat and eke out a hardscrabble existence as a farmer.

But Mr. Daschle's embarrassment of riches is a typical story, and in fact is the result of the liberal ideology his critics have been advocating for decades. The main story of the Obama Presidency so far isn't the contradiction between Mr. Obama's campaign promises and the messier reality of his nominees. That was always inevitable. The real story is the massive transfer of power and wealth now underway from the private sector to the political class. Mr. Daschle could make so much money and achieve such prominence because he was expected to be a central broker in that wealth transfer.

Alston & Bird, the white-shoe law firm that took in Mr. Daschle, is a lobbying shop. Any normal person would therefore consider Mr. Daschle, who does not have a law degree, to be a lobbyist. But he was not technically a lobbyist under Beltway rules, and while it is still unclear exactly what services he performed as "Special Public Policy Advisor" to pile up $2.1 million, we do know he consulted for the insurance conglomerate UnitedHealth Group.

Mr. Daschle cashed in to the tune of nearly a quarter million dollars from various health-care businesses. The Health Industry Distributors Association paid $14,000 to hear him speak in March 2008 about "the impact an Obama administration will have on the industry." America's Health Insurance Plans, the insurers' lobby, gave $20,000 for another speech, as did health-care consulting firms, hospital systems and pharmacy boards.

Mr. Daschle's critics say he breached some fanciful code of honor separating corporate America and government. Please. Business groups spend to get intelligence and minimize political risk. In the case of Mr. Daschle, he was trading less on his career in "public service" than his proximity to and early support for Mr. Obama. While he was the recipient of industry generosity, the going wager was that he'd be White House Chief of Staff.

What Mr. Daschle's lucrative career as influence peddler really illustrates is how much Washington is now expanding its reach over the economy. Politicians and their staffers can make or break fortunes by slipping a rider into a "must pass" bill or dispensing billions of dollars in subsidies to favored constituencies. Naturally businesses are going to protect their interests and hire lobbyists to get the decisions to come out their way.

Had Mr. Daschle been confirmed, he would have been the most important man in a health-care industry expected to be worth $2.5 trillion in 2009, which is larger than the economy of France. With merely a torque to this or that regulation -- to say nothing of the "reform" he was to oversee as White House "health czar" -- he would have channeled all this wealth in one direction or the other. Just another day at the office.

This is all part of the same entitlement mentality that caused Mr. Daschle's former colleagues to barely raise an eyebrow over his "disappointing mistakes" on taxes, as Senate Finance Chairman Max Baucus put it. West Virginia Democrat Jay Rockefeller said Mr. Daschle's tax oversights had to be weighed against the value he brings "in terms of the moral necessity of getting universal health care." So tax avoidance is justifiable as long as you're saving mankind.

We have come a long way from liberal outrage over the "K Street Project," Tom DeLay's effort to strong-arm lobbyists into hiring more Republicans. True, when the DeLay GOP settled into incumbency, it dumped the spending restraint and reform that might have limited the ecosystem that allows the Daschles of the world to proliferate. Still, it's amusing to see liberals, who run as the party of government, get momentarily indignant when one of their own cashes in on the spoils of their system.

As for Mr. Obama, as recently as Monday night the President was saying he "absolutely" stood by his nominee before reluctantly accepting his withdrawal. So much for promising to vanquish the lobbyists before banishing the special interests. This was always an implausible bill of goods, considering that the major special interest in Washington is Washington itself

Tom Daschle's Washington
His riches illustrate the expanding power of the political class.