PRESIDENT GEORGE WASHINGTON, WOULD YOU RECOGNIZE THE GOVERNMENT YOU ESTABLISHED IF YOU WERE TO COME BACK TO THE OBAMANATION? 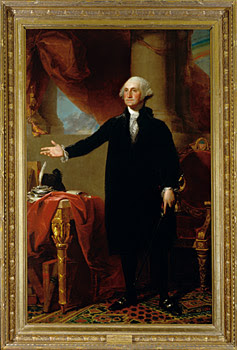 George Washington (Lansdowne portrait) by Gilbert Stuart, oil on canvas, 1796
National Portrait Gallery, Smithsonian Institution. Acquired as a gift to the nation through the generosity of the Donald W. Reynolds Foundation.

"First in war, first in peace,

and first in the hearts of his countrymen,

he was second to none

in humble and enduring scenes of private life.

his example was as edifying to all around him

as were the effects of that example lasting....

The purity of his private charter gave effulgence to his public virtues...."