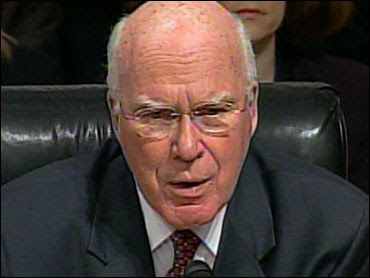 The term "McCarthyism," coined in 1950 in reference to Senator Joseph McCarthy's practices. Today the term is used more generally to describe demagogic, reckless, and unsubstantiated accusations, as well as public attacks on the character or patriotism of political opponents.
- Wikipedia

A growing chorus of critics is demanding the creation of a special commission to "investigate" the Bush administration's alleged abuses of power, especially prosecution of the war on terrorism. Senate Judiciary Committee Chairman Patrick Leahy called for a "truth commission" last week, and House Judiciary Committee Chairman John Conyers Jr. has introduced legislation to establish a National Commission on Presidential War Powers and Civil Liberties.

For his part, President Obama has reacted coolly to calls to investigate Bush officials. Obama is right to be skeptical; this is a profoundly bad idea -- for policy and, depending on how such a commission were organized and operated, for legal and constitutional reasons.

There is nothing new about "blue ribbon" commissions. Notable examples are the Warren Commission, established by President Lyndon Johnson to review the circumstances of President John F. Kennedy's assassination, and the Sept. 11 commission, organized by Congress to consider the intelligence and security failures surrounding the events of that day in 2001.

Because of their unique organizations, these commissions often exist outside of the Constitution's three branches of government -- as would be the case with Conyers's proposed National Commission on Presidential War Powers and Civil Liberties. Under that proposal, introduced in the House as H.R. 104, there would be nine members, one selected by the president and the others appointed by the congressional leadership. Its charge would be to "investigate relevant facts, circumstances and law surrounding" various Bush administration policies, including the use of enhanced interrogation methods and domestic "warrantless" electronic surveillance, and report its conclusions and recommendations to Congress and the president.

The Constitution requires that anyone exercising significant authority under federal law be appointed by the president with the Senate's advice and consent, or by department heads or the courts in the case of lower-level officials. So the commission would be unlawful if it served anything but an advisory role. The separation of powers also requires that officials exercising executive authority, such as the power to investigate potential violations of federal law with a view toward prosecution, be subject to presidential removal -- at least for good cause. A commission designed to investigate alleged criminal conduct by particular individuals -- especially a commission with subpoena power -- also raises serious concerns about due process that could render it unconstitutional.

On its face, Conyers's proposed commission appears advisory, but many of its advocates clearly expect more than suggestions in the way of results. Conyers himself has suggested that the statutes of limitations applicable to criminal offenses for "torture" and "war crimes" be extended as part of his effort to rein in the imperial presidency. Leahy's model would be even more questionable, since that body would have the power to offer participants immunity from prosecution -- usually an executive or congressional function. Clearly, much depends on how any such commission would operate and on the nature of its conclusions and recommendations.

In particular, any effort to determine individual criminal responsibility may undercut a commission's "advisory" nature because of the offenses at issue. At least some of these would also be violations of international law and, as such, arguably subject to claims of universal jurisdiction by foreign states. A determination of criminal conduct -- especially if it is the only "authoritative" statement on the subject by a U.S. governmental body -- could serve as a pretext for the international prosecution of individuals. Doubtless, many advocates of such a commission, who also have been among the most vociferous Bush critics throughout the war on terrorism, hope for exactly that result.

They should think twice. Attempting to prosecute political opponents at home or facilitating their prosecution abroad, however much one disagrees with their policy choices while in office, is like pouring acid into our democratic machinery. As the history of the late, unlamented independent counsel statute taught, once a Pandora's box is opened, its contents can wreak havoc equally across the political and party spectrum. If, for example, al-Qaeda is nothing more than a criminal conspiracy -- as some have claimed for many years -- President Obama's charge sheet has already been started. By authorizing continued Predator missile attacks against al-Qaeda leaders in Afghanistan and Pakistan, he has directly targeted those "civilians" with deadly force. That is a war crime.

Obama and the Democratic Congress are entitled to revise and reject any or all of the Bush administration's policies. But no one is entitled to hound political opponents with criminal prosecution, whether directly or through the device of a commission, and those who support such efforts now may someday regret the precedent it sets. Claims that the Bush administration abused presidential powers have been thoroughly reviewed by several congressional committees, and the Justice Department is capable of considering whether any criminal charges are appropriate. If H.R. 104 or a similar bill is passed by Congress, Obama should nip in the bud this recipe for a continuing political vendetta and veto the legislation