SHARIA HAS COME TO THE MALAKAND REGION OF AMERICA'S ALLY PAKISTAN. FIVE MILLION PEOPLE NOW LIVE UNDER A MURDEROUS THEOCRACY. 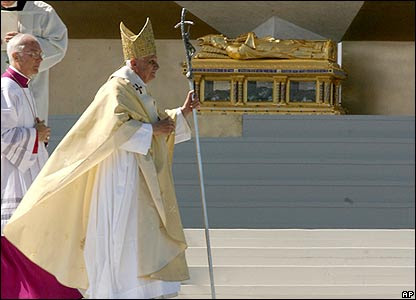 A speech this week by Pope Benedict XVI has incensed Muslims across the world. 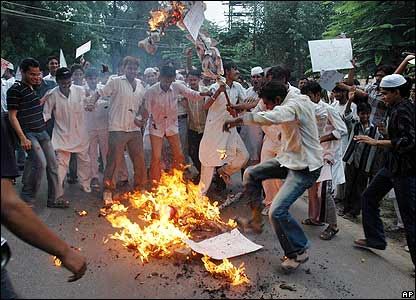 Some Indian Muslims burnt an effigy of the world's Roman Catholic leader who quoted remarks which linked Islam to violence.

In the Swat Valley, where a young Winston Churchill once served with the Malakand Field Force battling Muslim insurgents, his successors have concluded the game isn't worth the candle. In return for a temporary ceasefire, the Pakistani government agreed to let the local franchise of the Taliban impose its industrial strength version of Sharia across the whole of Malakand Region. Malakand has more than five million people, all of whom are now living under a murderous theocracy. Still, peace rallies have broken out all over the Swat Valley, and, at a Swat peace rally, it helps to stand well back: As one headline put it, "Journalist Killed While Covering Peace Rally."

But don't worry about Pakistani nukes falling into the hands of "extremists": The Swat Valley is a good hundred miles from the nation's capital, Islamabad – or about as far as Northern Vermont is from Southern Vermont. And, of course, Islamabad is safely under the control of the famously moderate Ali Zardari. A few days before the Swat deal, Mr. Zardari marked the dawn of the Obama era by releasing from house arrest Abdul Qadeer Khan, the celebrated scientist and one-stop shop for all your Islamic nuclear needs, for whose generosity North Korea and Iran are especially grateful.

From Islamabad, let us zip a world away to London. Among the growing population of Yorkshire Pakistanis is a fellow called Lord Ahmed, a Muslim member of Parliament. He threatened "to bring a force of 10,000 Muslims to lay siege to the House of Lords" if it went ahead with an event at which the Dutch parliamentarian Geert Wilders would have introduced a screening of his controversial film "Fitna."

Britain's Home Secretary, Jacqui Smith, reacted to this by declaring Wilders persona non grata and having him arrested and returned to the Netherlands.

Smith is best known for an inspired change of terminology: last year she announced that henceforth Muslim terrorism (an unhelpful phrase) would be reclassified as "anti-Islamic activity." Seriously. The logic being that Muslims blowing stuff up tends not to do much for Islam's reputation – i.e., it's an "anti-Islamic activity" in the same sense that Pearl Harbor was an anti-Japanese activity.

Anyway, Geert Wilders' short film is a compilation video of footage from recent Muslim terrorist atrocities – whoops, sorry, "anti-Islamic activities" – accompanied by the relevant chapter and verse from the Koran. Jacqui Smith banned the filmmaker on "public order" grounds – in other words, the government's fear that Lord Ahmed meant what he said about a 10,000-strong mob besieging the Palace of Westminster. You might conceivably get the impression from Wilders' movie that many Muslims are irrational and violent types it's best to steer well clear of. But, if you didn't, Jacqui Smith pretty much confirmed it: We can't have chaps saying Muslims are violent, because they'll go smash the place up.

So confronted by blackmail, the British government caved. So did the Pakistani government in Swat. But, in fairness to Islamabad, they waited until the shooting was well underway before throwing in the towel. Twenty years ago this month, Margaret Thatcher's Conservative ministry defended the right of a left-wing author Salman Rushdie to publish a book in the face of Muslim riots and the Ayatollah Khomeini's attempted mob hit. Two decades on, a supposedly progressive government surrenders to the mob before it's even taken to the streets.

In his first TV interview as president, Barack Obama told viewers of al-Arabiya TV that he wanted to restore the "same respect and partnership that America had with the Muslim world as recently as 20 or 30 years ago." I'm not sure quite what golden age he's looking back to there – the Beirut barracks slaughter? The embassy hostages? – but the point is, it's very hard to turn back the clock. Because the facts on the ground change and change remorselessly.

Between 1970 and 2000, the developed world declined from just under 30 percent of the global population to just over 20 percent, while the Muslim world increased from 15 percent to 20 percent. And in 2030, it won't even be possible to re-take that survey, because by that point half the "developed world" will itself be Muslim: in Bradford as in London, Amsterdam, Brussels and almost every other western European city from Malmo to Marseilles the principal population growth comes from Islam.

Along with the demographic growth has come radicalization: It's not just that there are more Muslims, but that, within that growing population, moderate Islam is on the decline – in Singapore, in the Balkans, in northern England – and radicalized, Arabized, Wahhabized Islam is on the rise. So we have degrees of accommodation: surrender in Islamabad, appeasement in London, acceptance in Toronto and Buffalo.