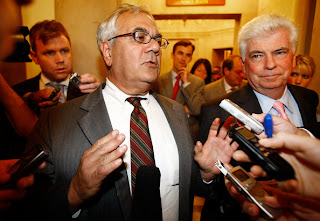 President Obama's plan to revitalize the housing market and stem the rising tide of home foreclosures by using the power and expanding the scope of the federal government so as to pressure lenders to suspend foreclosure proceedings and to provide reduced monthly payments for borrowers unable to meet current obligations reeks of the same kind of government involvement which led to the housing and credit crisis in the first place. This is just another thinly-veiled dose of the very same failing policies, featuring the very same lead players. Fannie Mae. Freddie Mac. Christopher Dodd. Barney Frank.

That's right. The gang's all here and, once again, we're back to characterizing homeownership as a right and artificially propping up people who simply cannot stay afloat -- only, this time, instead of forcing banks to lend money to borrowers who are obviously incapable of paying back the loans, the government is pumping money into the market and forcing banks to maintain those bad loans and abandon any hope for remedy.

Once again, the people hurt the most are those like you and I, people who live and die by their budgets, who constantly are forced to make endless, unthinkable sacrifices in order to remain responsible and meet their own obligations. You and I will be the ones paying more in insurance rates, in interest rates, in fees and related costs. You and I will be the ones hurt when, six months down the road, the proverbial can being kicked by the Obama administration comes to a grinding halt and the inevitable becomes reality.

One of these days, it must stop, it will stop, and it will either stop naturally when the money dries up, when our currency is worth barely more than the paper it's printed on, when countries like China and the United Arab Emirates explain that, gosh, our credit and our money just isn't good anymore, or it will stop artificially when Americans finally wake up and smell the malfeasance, the socialism, and the "change" we so quickly will want to forget.