NAIVETE IS NOT A GOOD BASIS FOR AMERICA'S FOREIIGN POLICY, AS JIMMY CARTER FOUND OUT THE HARD WAY AT THE COST OF AMERICAN LIVES 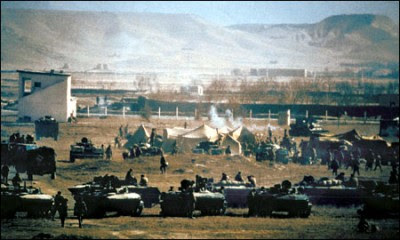 EARLY IN HIS PRESIDENCY, Jimmy Carter set about to alter US policy toward the Soviet Union. Six days after his inauguration he sent a letter to Soviet ruler Leonid Brezhnev, hailing the two countries' "common efforts towards formation of a more peaceful, just, and humane world" and saluting Brezhnev's supposed "aspiration for strengthening and preserving . . . peace." In a commencement address at Notre Dame, he declared that Americans had shed "that inordinate fear of communism which once led us to embrace any dictator who joined us in that fear." In the months that followed, Carter slashed the defense budget, scrapped the B-1 bomber, welcomed the takeover of Nicaragua by a Marxist junta, and launched diplomatic relations with the Castro dictatorship in Cuba.

It wasn't until the Soviets invaded Afghanistan in 1979 that Carter finally woke up to his naiveté. Moscow's brutal aggression had "made a more dramatic change in my opinion of what the Soviets' ultimate goals are," he admitted, "than anything they've done in the previous time that I've been in office."

Carter's failure to understand the threat posed by the Soviet Empire had costly consequences for America and the world. Will this pattern now be repeated with Barack Obama and the global threat from radical Islam?

Ever since taking office two weeks ago, Obama has been at pains to proclaim a change in US-Muslim relations. In his inaugural address he invited "the Muslim world" to embark on "a new way forward, based on mutual interest and mutual respect." Six days later he gave Al-Arabiya, an Arabic-language satellite channel, his first televised interview as president. This week he continued his charm offensive with a friendly letter to the Organization of the Islamic Conference, which represents 57 Muslim governments. He has promised to deliver a major address in an Islamic capital by spring.

The president cannot be faulted for using his bully pulpit to reach out to the world's Muslims, especially given his Muslim roots and family ties. But running through Obama's words is a disconcerting theme: that US-Muslim tensions are a mostly recent phenomenon brought on largely by American provincialism, heavy-handedness, and disrespect. Missing is any sense that the United States has long been the target of jihadist fanatics who enjoy widespread support in the Muslim world.

"My job to the Muslim world is to communicate that the Americans are not your enemy," Obama said, although "we sometimes make mistakes" and "have not been perfect," and even though "too often the United States starts by dictating" and fails to use "the language of respect."

Such apologetic pandering is inexcusable. For decades, as commentator Charles Krauthammer noted last week, "America did not just respect Muslims, it bled for them." To liberate oppressed Muslims in Bosnia, Kosovo, Kuwait, Afghanistan, and Iraq, hundreds of thousands of Americans risked -- and in many cases lost -- their lives. Not even the Islamist atrocities of 9/11 provoked American leaders to treat Islam with disdain. "We respect your faith," George W. Bush earnestly told the world's Muslims in a nationally televised speech on Sept. 20, 2001. "Its teachings are good and peaceful, and those who commit evil in the name of Allah blaspheme the name of Allah." Would that the Muslim world's leaders spoke with such courtesy about Christianity and Judaism

Even more troubling is Obama's seeming cluelessness about US-Muslim history.

"The same respect and partnership that America had with the Muslim world as recently as 20 or 30 years ago -- there's no reason why we can't restore that," the president said on Al-Arabiya.

Well, let's see. Twenty years ago, in 1989, American hostages were being tortured by their Hezbollah captors in Beirut and hundreds of grief-stricken families were in mourning for their loved ones, murdered by Libyan terrorists as they flew home for Christmas on Pan Am Flight 103. Thirty years ago, in 1979, the Ayatollah Khomeini overthrew the Shah of Iran, proclaimed America "the Great Satan" and inspired his acolytes to seize the US embassy and hold scores of Americans hostage for nearly 15 months. That same year Islamist mobs destroyed the US embassies in Pakistan and Libya, and staged anti-American riots in other countries. 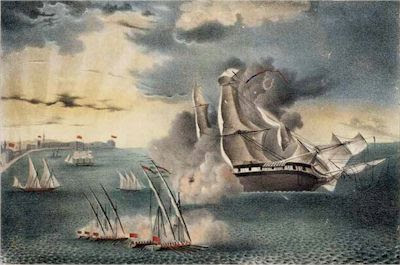 Jihad at sea: A US frigate battles Muslim pirates off the Barbary coast, 1803

The golden age of American-Muslim relations that Obama harks back to did not exist. Radical Islam's hatred of the United States is not a recent phenomenon, it has nothing to do with "respect," and it isn't going to be extinguished by sweet words -- not even those of so sweet a speaker as Obama. Sooner or later, Barack Obama must confront an implacable reality: The global jihad, like the Cold War, will only end when our enemies lose their will to fight -- or when we do. Let us hope he's a quicker study than Jimmy Carter.
___________________

by Jeff Jacoby
The Boston Globe
February 4, 2009
http://www.jeffjacoby.com/3426/obamas-charm-offensive-and-the-global-jihad
(Jeff Jacoby is a columnist for the Boston Globe.)