MINISTER OF CULTURE? ARTS CZAR? WHAT ARE THEY THINKING OF? HAVE WE LEARNED NOTHING FROM THE HISTORY OF THE SOVIENT UNION? 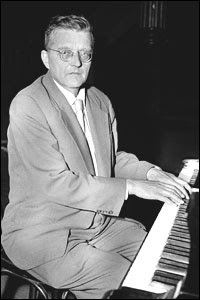 Soviet composer Dmitri Shostakovich poses during a recording session for the French record label Pathe Marconi in Paris, May 23, 1958.

It seems to me that all my long life I have been an opponent of Communism. I grew up reading and learning about the purges of Joseph Stalin which resulted in the deaths of millions and millions of people. Purges in Soviet Russia began, not with Stalin, but with the 1917 Revolution itself. The primary victims of the purges were the 'political opponents' of the regime. But who were the political opponents? They could be anyone, including artists whose art somehow suggested opposition to the tenets of Marxism.
As much as I hated Soviet Communism, I loved Russian music. I fell in love with Russian composers in my early teens, primarily the Romantic composers such as Tschaikovsky, Rimsky-Korsakov, et al. Eventually I grew bored with the Romantics and began to appreciate more and more composers such as Dmitri Shostakovich and Sergei Prokofiev, whose Piano Concerto No. 3 in C Major is near the top of my list of favorites.
But it is the music Dmitri Shostakovich which affects me most deeply. Perhaps it is because he captures in his music the suffering of the Russian people under the brutal oppression of the Nazi invasion as well as what they suffered from their own leaders. Shostakovich fell from favor after Stalin saw a performance of his Opera, Lady Macbeth from Minsk. He was the victim of caustic criticism by Soviet authorities after that and suffered greatly. He was eventually restored to acceptablity, but his life had been scarred by official art beaurocrats.


Barbara Lake tells us something about the escape from artistic repression which modern Soviet/Russian artists have managed to make:

Basically, the latter definition means that the work must serve a useful political purpose. Anatoly Krynsky, who will be showing in Glen Cove (at the Lakewood Gallery this month) asserts that “To work under such circumstances is impossible.”

Mr. Krynsky is a painter who left the USSR with his family four years ago. “Most artists do not have a chance to exhibit in the Soviet Union,” Krynsky explained, “and must paint in the style of socialist-realist. An artist who wishes to have his work exhibited must first obtain approval from a special art committee. The first time he brings a work in, he might get a comment like, ‘this suggests China because there is a dragon in it.’ He returns and gets another comment like. ‘it’s fine, but this part here we don’t like so go do it over again.’ “ This procedure continues until the emasculated final work has finally met the approval of the committee.

Mr. Krynsky was a victim of the 1976 purge which saw up to 100 of the brightest Soviet artistic lights expelled. He had applied for an exit visa and was promptly fired from his job. His unemployment lasted six months until he was eventually allowed to leave. About forty dissident Soviet artists took up residence in New York; another thirty now live in Paris. According to the artist, “the 1976 purge followed two years of relative liberation” which resulted from the bad publicity the Soviet government received following a particularly heavy-handed show of repression in 1974. In September of that year, Russian authorities bulldozed an open air exhibit of modernist art in Moscow. Unfortunately for them, the event was witnessed by western reporters and subsequently played up in the western press. As Krynsky states, the Moscow exhibit was a “planned provocation by artists” who wanted to get their message across to the west. Krynsky did not participate in that particular exhibit, but did in many others like it across the Soviet Union. During the liberalization period, many more exhibits were held. At one in Moscow, in 1975, people stood in line for three hours to view the works of 165 dissident artists, says Krynsky. Eventually, though, the authorities figured the best way to solve the problem was to get rid of the ‘troublemakers.’ “They thought Well we won’t have them but at least they won’t bother us,’” Krynsky said in a recent interview.

These thoughts have come to mind after I read today's column by Jeff Jacoby on the possibility that the present occupant of the White House may create the position of Art Czar for the United States. He has been accused of planning to Sovietize America by many and it seems to me that if he does indeed create a cabinet position to 'foster the arts' in our Country it is time indeed to become more than a little concerned.

THERE IS NOTHING NEW under the sun, says the Good Book, and the plea for a Cabinet-level secretary of arts and culture is no exception.

That plea came recently from composer-producer Quincy Jones, who has long wanted the United States to establish a national ministry of culture akin to those in Italy, Germany, or France. "The next conversation I have with President Obama is to beg for a secretary of arts," he said in a radio interview shortly after the presidential election. Culture and the arts are "just as important as military defense," Jones argues, and a federal arts czar can ensure that American students learn something of their cultural roots. "Every country can be defined through their food, their music, and their language," he told NPR last month. "That's the soul of a country."

Jones's call has been taken up by jazz musician Herbie Hancock, who has not only lobbied Obama on the need for a secretary of culture, but offered to fill the position, and by New York musicians Jaime Austria and Peter Weitzner, whose online petition endorsing the idea has been signed by more than 228,000 people. The president hasn't taken a stand, but supporters are expectant. In his campaign arts platform, after all, he and Joe Biden were described as "champions of arts and culture." Surely, they hope, a president who is a best-selling author -- and who totes an iPod containing "a lot of Coltrane, a lot of Miles Davis, a lot of Charlie Parker" -- will embrace the idea of a high-ranking arts czar.

But the case for a national cultural overseer is no better today than it was 50 years ago, "in the early and artistically optimistic days of the Kennedy administration," as Harper's editor Russell Lynes wrote at the time, when "there was a good deal of enthusiastic talk about a Cabinet post for a minister of culture."

The idea went nowhere then, just as it had gone nowhere a decade earlier, when the president of the American Federation of Musicians insisted that only a federal Department of the Arts could lift American culture from its "sad and declining estate." Or even earlier, when the muralist George Biddle, who headed the War Department's Art Advisory Committee during World War II, was urging fellow artists to support a strong federal role in the arts. One prominent artist, the realist painter John French Sloan, replied scornfully: "Sure, it would be fine to have a Ministry of the Fine Arts in this country. Then we'd know where the enemy is."

That was putting it strongly, but Sloan had the right instinct.

Culture and art at their best are potent wellsprings of meaning and insight. With their power to illuminate, motivate, or elucidate, the arts are indispensable to the nation's intellectual life. They mold our understanding of ourselves; they shape, at least in part, our perception of the world around us; they communicate -- or they challenge -- our deepest values. No sensible person could deny the importance of art and culture to the American experience.

Which is exactly why they shouldn't be entangled with government. A ministry of culture has no place in a society committed to liberty of conscience and a robust marketplace of ideas. Like religion, the arts are best left government-free. The state should no more be entrusted with making artistic judgments than with making theological ones -- there is no place in our system for a ministry of religion, either. Of course religion is profoundly important -- the Framers repeatedly called it indispensable to the success of American democracy -- but importance alone is no justification for government involvement.

"I yield to no one in my belief that the arts need all the support they can get, but some kinds of support make trouble," wrote Lynes, who in addition to editing Harper's was a highly regarded art historian and Renaissance man. "The less the arts have to do with our political processes, I believe, the healthier they will be, the more respected, the more important to Americans, and the more productive."

Quincy Jones may be right in pointing to food, music, and language as the essence of any nation's culture. But no food czar is charged with defining or promoting American cuisine, and there is no Secretary of Language to coordinate American idioms and grammar. In all their democratic splendor and variety, American gastronomy and American English flourish without centralized supervision from Washington. So do American arts and culture. The art world has its problems, but too little government isn't one of them. If the president truly wants to be a "champion of arts and culture," the best thing he can do for them is nothing at all.


(Jeff Jacoby is a columnist for The Boston Globe.)
Posted by Leo Rugiens at 12:08 PM