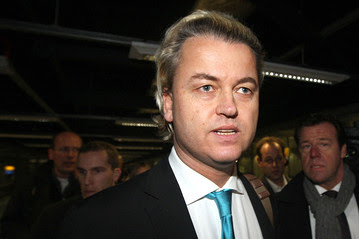 Twenty years ago, Andres Serrano put a plastic crucifix in a glass of urine, photographed it and called it art. Conservatives in particular weren't pleased: not with Mr. Serrano, not with his picture, and not with the National Endowment for the Arts, which had forked over $15,000 in taxpayer money to support this uretic gesture.

Also 20 years ago: On Valentine's Day, 1989, the Ayatollah Khomeini issued a fatwa against Salman Rushdie, condemning him to death for supposedly blaspheming Islam in his novel, "The Satanic Verses." Iran later upped the ante by severing diplomatic ties with Britain and putting a bounty on Mr. Rushdie's head. The fatwa remains in effect today by order of Iran's Supreme Leader, Ali Khamenei.

These twin anniversaries come to mind following the British government's decision last week to ban Dutch lawmaker Geert Wilders from British soil as an "undesirable person." Mr. Wilders is also being prosecuted for hate speech in his native Holland, where he faces up to 16 months in prison if convicted. His alleged crime involves making a short film called "Fitna," which draws a straight line between Quranic verses and acts of Islamist terror. Mr. Wilders has also called for banning the Quran, which he labels a "fascist book" on a par with Hitler's "Mein Kampf."

Whatever else might be said about Mr. Wilders's travel ban and prosecution, it helps put into context the events of 1989. In the case of Mr. Serrano, liberal Americans went into a lather about defending his rights to artistic expression and freedom of speech against the parochial leaders of the religious right, men like Jesse Helms and Pat Robertson. Never mind that the worst of their threats involved withholding public funding; fundamental things were said to be at stake.

As for the Rushdie affair, after some initial hesitation most of the liberal intelligentsia on both sides of the Atlantic rallied to his cause. True, there were some dissenters: Jimmy Carter called "The Satanic Verses" a "direct insult to those millions of Muslims whose sacred beliefs have been violated" while feminist Germaine Greer declared that she "[refused] to sign petitions for that book, which was about his own troubles."

On the whole, however, the West held firm. A joint statement issued by the foreign ministers of the European Community insisted that "fundamental principles are at stake," adding that they "remain fully committed to the principles of freedom of thought and expression within their territories."

Fast forward to Mr. Wilders's situation and what's remarkable is that his most serious detractors -- those that aren't themselves Islamists or spokesmen for supposedly mainstream Muslim organizations -- tend to fall to the political left. In Holland, leaders of both the Socialist and Labor parties support the prosecution. In Britain, it's the Labour government of Gordon Brown that has enforced the travel ban. In Germany, the leftish Der Spiegel calls Mr. Wilders "pushy" and accuses him of making "hate-filled tirades." Elsewhere he is described as a "racist," an "Islamophobe," and so on.

For his part, Mr. Wilders says he hates Islam as an ideology, not Muslims as individuals, and categorically parts company with the neo-fascist European right typified by the late Jörg Haider. He has also traveled extensively in the Middle East; even Der Spiegel admits "he is not a dull racist and xenophobe."

But irrespective of Mr. Wilders's politics -- and I wouldn't be the first to point out that his calls to ban the Quran square oddly with his sense of himself as a champion of free speech -- his travails are no less significant than Mr. Rushdie's. And they present a test for both liberals and conservatives.

For liberals, the issue is straightforward. If routine mockery of Christianity and abuse of its symbols, both in the U.S. and Europe, is protected speech, why shouldn't the same standard apply to the mockery of Islam? And if the difference in these cases is that mockery of Islam has the tendency to lead to riots, death threats and murder, should committed Christians now seek a kind of parity with Islamists by resorting to violent tactics to express their sense of religious injury?

The notion that liberals can have it both ways -- champions of free speech on the one hand; defenders of multiculturalism's assorted sensitivities on the other -- was always intellectually flimsy. If liberals now want to speak for the "right" of this or that group not to be offended, the least they can do is stop calling themselves "liberals."

For conservatives, especially of the cultural kind -- the kind of people who talk about defending Western Civ. -- Mr. Wilders's case should also provoke some reconsiderations. It may not be impossible to denounce the likes of Mr. Serrano while defending the likes of Mr. Wilders. But a defense of Mr. Wilders is made a lot easier if one can point to the vivid difference between a civilization that protects, even celebrates (and funds!), its cultural provocateurs and a civilization that seeks their murder.

This is no small point. Western civilization is not simply the "Judeo-Christian tradition." It is also the civilization of Socrates and Aristophanes, Hume and Voltaire, Copernicus and Darwin; of religious schismatics and nonbelievers. This is the civilization that is now required to define itself, oddly enough, by the case of a flamboyant Dutch politician with inconsistent ideas and a bouffant hairdo. If he can't be defended, neither can Mr. Rushdie. Or Mr. Serrano. Liberals and conservatives alike, take note.


Barack Hussein Obama aka Barry Soetoro
is not eligible to be President of the United States
because he is not a Natural Born Citizen
as required by Article Two, Section One, Clause Five
of the United States Constitution
because he was not born of TWO PARENTS
BOTH OF WHOM WERE UNITED STATES CITIZENS
at the time of his birth. His father was a citizen
of Kenya/Great Britain.
Check it out: