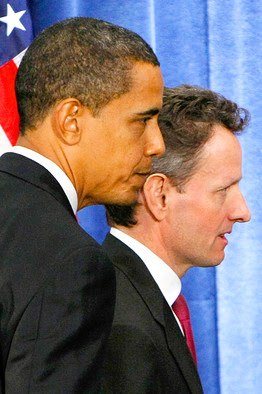 
Had he been judged under the current code of political justice, Timothy Geithner would be home in New York, phoning old IMF friends for a job. Instead, the former tax scofflaw is U.S. Treasury Secretary. Call it the Geithner Exception. I'm for it. Before it fades from memory, Mr. Geithner's near-death experience deserves a closer look.

Working inside American politics is coming to resemble Stalinist Russia. In good standing one day, party loyalists or public officials can find themselves the next day taking a random bullet. How low the bar has fallen for summary execution became apparent during the presidential campaign.

In March, Obama foreign policy adviser Samantha Power was quoted by a newspaper in nearby Scotland calling Hillary Clinton a "monster." The Obama campaign immediately threw her out the window. Cowed and numbed, no one in politics raised an objecting peep at the absurd disproportion.

Next, Mrs. Clinton's chief strategist Mark Penn was put on a train to the gulag. Remember why? Time's up. For going to a meeting at the Colombia Embassy in his role as head of Burson-Marsteller. Under Washington rules, this was sufficient to decapitate the Clinton campaign.

More serious was the elimination of Paul Wolfowitz at the World Bank. After a media show trial that lasted several weeks, Mr. Wolfowitz lost his job running the Bank because apparatchiks inside concocted an ethics violation

Judged by standards such as these, Tim Geithner -- a non-taxpaying Treasury Secretary -- should be toast.

Beyond these mockeries of useful standards lies Washington's double standard. Mr. Geithner is being waved through even as Rep. John Conyers and Sen. Carl Levin push their Orwellian "truth commissions" to put high Bush administration officials in the criminal dock. At this level of the game, an official doesn't just lose his job, comrade; he loses everything.

The just-issued Conyers report on "Reining in the Imperial Presidency" calls on the new Obama administration to "begin an independent criminal review (my emphasis) of activities of the outgoing administration, such as enhanced interrogation, extraordinary rendition, and domestic warrantless surveillance." As prelude, the House last February voted contempt of Congress against Bush White House officials Josh Bolten and Harriet Miers and referred them for prosecution.

Some may argue that a Tim Geithner or Eric Holder deserves no more quarter than the Democratic opposition has given former Justice Department official John Yoo or the other targets of the Democrats' calls for "criminal" prosecution of former government officials and CIA interrogators.

Others will say this is the normal rough and tumble of politics. It is not. It is more insidious than that. The system is on a downward spiral in which the notion that a sitting American government should be able to function is irrelevant.

Washington is falling to the level of a Web-based video game. Everyone is expendable. Treasury secretaries and presidential advisers are a dime a dozen. Put differently: The job-protected and gerrymandered lifers are driving out the competition. More often than not, Washington's worst people are destroying its better people.
In Today's Opinion Journal

In his report, Mr. Conyers cites a catalogue of good-government laws that flowed out of Richard Nixon's impeachment: the Federal Campaign Finance Act, the Foreign Intelligence Surveillance Act, the Independent Counsel Act, the Ethics in Government Act, and the Presidential Records Act.

Whatever the original rationale for such laws, the rankest impulses in politics soon turned them into weapons to take down officials in a government one can't overthrow by other means. You could fill the whole House chamber with men and women who since Watergate have been driven out and bankrupted by them. Criminalizing policy differences has become the modern version of bills of attainder.

President Obama has to decide whether to pursue prosecutions of former Bush officials, especially the CIA's terror interrogators. He must realize that the exterminating angels, who come in two colors -- blue and red -- are ready to chase down him and his appointees.

Thus arrives the Geithner Exception. Getting to be Treasury secretary may be more than Mr. Geithner deserves. This is an opportunity, though, to admit that giving someone's government a chance to function, assuming that's any longer possible, is a greater public good than witch-burning. Amid an economic crisis, the new president said Mr. Geithner had his confidence. Now he has him. Let voters and the markets judge their performance, not the phony and ruinous moral outrage of the Beltway.