WHEW! THAT WAS CLOSE! THE PRO-LIFE MOVEMENT JUST ESCAPED THE BULLET BY INCHES! TOM DASCHLE, 'CATHOLIC', BIG-TIME PRO-ABORTION, TAX EVADER IS OUT! 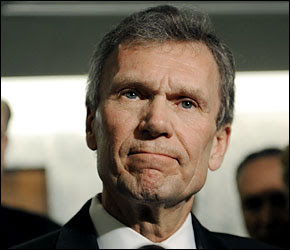 Faced with problems over back taxes and potential conflicts of interest, Daschle withdraws nomination. (Photo: Melina Mara - The Washington Post)

Former Sen. Tom Daschle withdrew his name from contention to be President Barack Obama's secretary of health and human services, bowing to the pressure that arose from his failure to pay more than $100,000 in taxes.

The move is a blow to the administration and to one of Mr. Obama's closest friends and political allies, a man he had tapped to spearhead his push for sweeping health reform.

Mr. Daschle said in a statement that he deeply believed in health reform, but "if 30 years of exposure to the challenges inherent in our system has taught me anything it, it has taught me that this work will require a leader who can operate with the full faith of Congress and the American people and without distraction." He added, "Right now, I am not that leader" and would be a distraction.

Mr. Obama added in a statement of his own that "I accept his decision with sadness and regret." Mr. Obama also said, "Tom Daschle has devoted his life to public service and health care reform so that every American has access to health care they can afford. I had hoped that he could bring this passion and expertise to bear to finally achieve that goal, which is so essential to the progress of our economy and the wellbeing of businesses and families across our nation."

His stunning statement came less than three hours after another Obama nominee also withdrew from consideration, and also over tax problems. Nancy Killefer, nominated by Mr. Obama to be the government's first chief performance officer, said she didn't want her bungling of payroll taxes on her household help to be a distraction. (See a related article on Killefer.)

Mr. Daschle's decision to withdraw ends a fight that threatened to erode Mr. Obama's political capital, even as the new president is pushing to keep his economic agenda on track.

Less than an hour before Mr. Daschle's announcement, Sen. John Ensign (R., Nev.) had voiced strong reservations about the nomination, and vowed to grill Mr. Daschle at a Senate Finance Committee hearing that had been planned for next week. "We're going to ask some tough, tough questions," he said, adding Sen. Daschle's problems "are more serious" than those weathered by Treasury Secretary Tim Geithner during his nomination process.

Are any of Obama's cabinet picks at risk of becoming a liability for the administration?

Democrats had tried to rally support for the former Senate majority leader, and expressed dismay at his abrupt withdrawal, which left senators in both parties shell-shocked. Sen. John Kerry (D., Mass.) said Mr. Daschle made "innocent" errors, and bemoaned the rush to judgment. "Everybody's got to step back," he said.

Sen. Kent Conrad (D., S.D.) said Mr. Daschle is "among the most honest, decent people I've known in my life." He added Mr. Daschle's decision to withdraw is a "tremendous loss" for the White House, which was counting on him to lead the coming health-care overhaul effort. "It's a tragedy."

But Mr. Daschle faced increasing pressure over the tax issue, which was becoming a political liability for the White House, and by Tuesday even his allies among Republicans were keeping their distance. "I'll always try to be fair. He's my friend," said Sen. Orrin Hatch (R., Utah), who nevertheless found it difficult to come to terms with the allegations against Mr. Daschle. "It's disconcerting."

The Senate Finance Committee had intended to post raw documents on its Web site as soon as Tuesday afternoon, detailing trips that Mr. Daschle made aboard a corporate jet of EduCap, a student lender allied with Mr. Daschle and his wife. The organization is under investigation by the Internal Revenue Service and the Finance Committee for alleged violations of its charter as a nonprofit.

Mr. Daschle took two trips with an EduCap-affiliated charity, one to the Bahamas, the other to Israel, Egypt and Jordan. Another Obama nominee, Central Intelligence Agency Director-designate Leon Panetta, was also on an EduCap trip.

But sources familiar with the documents say there were to be no revelations beyond what has already come to light over the past several weeks. The documents were not expected to have reached any conclusion on whether Mr. Daschle violated tax or non-profit rules by taking those trips.

Mr. Daschle has had personal and business dealings with EduCap and its top executive, Catherine Reynolds and her husband, Wayne, according to tax filings, court records and other documents.

The IRS's probe into EduCap is looking is looking into cash transactions involving Ms. Reynolds, the purchase of a $28 million corporate jet by EduCap, trips to Europe by Ms. Reynolds, and spending on gifts and luxuries, according to details disclosed in documents filed in a court case in Washington, D.C. The documents are exhibits in a Freedom of Information Act lawsuit EduCap is pursuing against the IRS demanding the names of individuals whom the agency has interviewed for its investigation. The IRS is refusing to identify many of its sources, saying they fear legal retaliation by EduCap.

The IRS also is trying to determine why a former EduCap "security officer" made two cash deposits of $170,000 each into personal account of Ms. Reynolds at Riggs Bank in 2003, according to disclosures by the IRS in U.S. District Court. The former employee told the IRS in 2006 that he didn't realize the money was going into Ms. Reynolds' personal account, according to an agent's notes filed with the court.

Daschle Withdraws Nomination for Health and Human Services Post
Former Senator Says He 'Will Not Be a Distraction;' Disappointed Obama Accepts Decision


THE WALL STREET JOURNAL
TUESDAY
02 FEBRUARY 09
Posted by Leo Rugiens at 10:51 AM