SURPRISE! NO OCCUPANT OF THE WHITE HOUSE HAS EVER BEEN ABLE TO WALK ON WATER, AND THE PRESENT OCCUPANT CANNOT ALTHOUGH SOME BELIEVE HE CAN 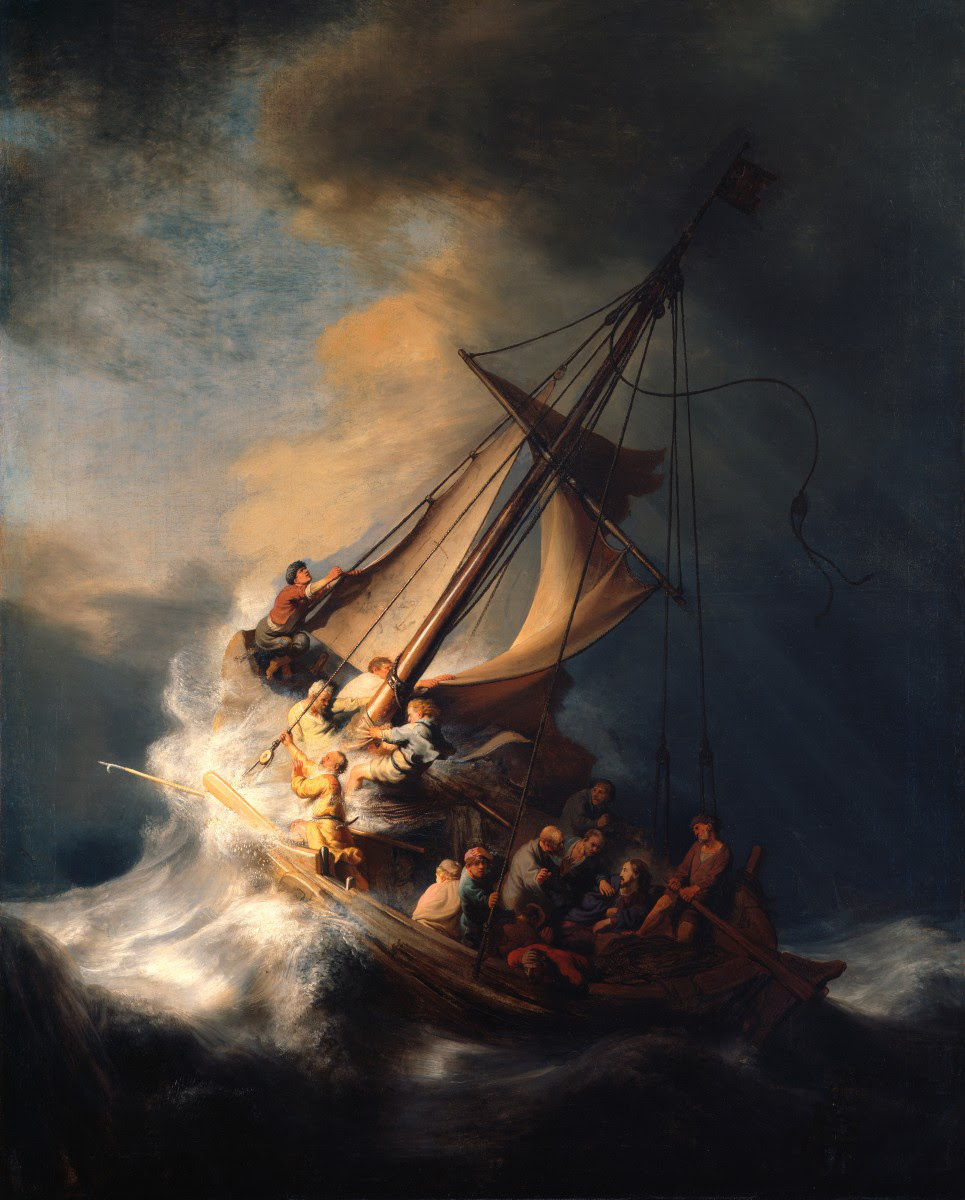 The Storm on the Sea of Galilee

In The Washington Post, E.J. Dionne tried to break it gently to us:
"No occupant of the White House has ever been able to walk on water."

Yeah, sure, no previous occupant of the White House has been able to walk on water – your Eisenhowers and Roosevelts, your Chester Arthurs and Grover Clevelands and whatnot.
But Barack didn't run as just another of those squaresville losers. He was gonna heal the planet and lower the oceans.
So, even if he couldn't walk on water, he should at least be able to paddle in it.

"He is a community organizer like Jesus was," said Susan Sarandon, "and now we're a community, and he can organize us."

So how's that going?
Jesus took a handful of loaves and two fish and fed 5,000 people.
Barack wants to take a trillion pieces of pork and feed it to a handful of Democratic Party interest groups.
Jesus picked twelve disciples. Barack seems to have gone more for one of those "Dirty Dozen" caper-movie lineups, where the mission is so perilous and so audacious that only the scuzziest lowlifes recruited from every waterfront dive have any chance of pulling it off.
The ends justify the mean SOBs: "Indispensable Tim" Geithner, wanted in 12 jurisdictions for claiming his kid's summer camp as a business expense, is the only guy with the savvy to crack the code of the U.S. economy. Tom "Home, James!" Daschle is the ruthless backseat driver who can figure out how to steer the rusting gurney of U.S. health care through the corridors of power. Charles Bronson is the hardbitten psycho ex-con who can't go straight but knows how to turn around the Department of the Interior.

And, of course, there's the lovable dough-faced shnook in the front office, Robert "Fall Guy" Gibbs. He didn't do nuthin' wrong, but, when seven nominees die in a grisly shootout with a Taxable Benefit Swat Team in the alley behind the Senate, he makes the mistake of looking sweaty and shifty answering routine questions.

A president doesn't have to be able to walk on water. But he does have to choose the right crew for the ship, especially if he's planning on spending most of his time at the captain's table, schmoozing the celebrity guests with a lot of deep thoughts about "hope" and "change." Far worse than his Cabinet picks was President Obama's decision to make the "stimulus" racket the all-but-sole-priority of his first month and then outsource the project to Nancy Pelosi, Barney Frank and Harry Reid.

Appearing on "The Rush Limbaugh Show" last week, I got a little muddled over two adjoining newspaper clippings – one on the stimulus, the other on those octuplets in California – and for a brief moment the two stories converged. Everyone's hammering that mom – she's divorced, unemployed, living in a small house with parents who have a million bucks' worth of debt, and she's already got six kids. So she has in vitro fertilization to have eight more.
But isn't that exactly what the Feds have done?
Last fall, they gave birth to $850 billion of bailout they couldn't afford and didn't have enough time to keep an eye on, and now, four months later, they're going to do it all over again, but this time they want trillionuplets. Barney and Nancy represent the in vitro fertilization of the federal budget. And it's the taxpayers who'll get stuck with the diapers.

Those supporters who were wary of touting Obama as the walk-on-water Messiah did their best to lower expectations by hailing him merely as the new FDR. You remember the old FDR – "We have nothing to fear but fear itself."

Ha! With the new New Deal, we have everything to fear.
As President Obama warned Tuesday, "A failure to act, and act now, will turn crisis into a catastrophe." If you're of those moonstruck Obammysoxers still driving around with the "HOPE, NOT FEAR" bumper stickers, please note that, due to an unfortunate proofreading error at the printing plant, certain nouns in that phrase may have become accidentally transposed.

As it happens, the best way to ensure catastrophe is to "act now." It would be nice if the world could all prance along in regimented unison like the Radio City Changettes. But, alas, the foreigners made the mistake of actually reading the "stimulus" bill, and the protectionist measures buried on page 739 subsection XII(d) ended, instantly, the Obama honeymoon overseas. The European Union has threatened a trade war. Up in Canada, provincial premiers called it "a march to insanity." Wait a minute, I thought the Obama era was meant to be the retreat from insanity, a blessed return to multilateral transnational harmony.

As longtime readers will know, I'm all in favor of flipping the bird to the global community. But at least, when Rummy was doing his shtick about "Old Europe," he did it intentionally. To cheese off the foreigners entirely accidentally before you've even had your first black-tie banquet is quite an accomplishment. Protectionism is serious business to the Continentals. Oh, to be sure, if the swaggering unilateralist Yank cowboy invades some Third World basket-case they'll seize on it as an opportunity for some cheap moral posturing. But in the end they don't much care one way or the other.

Plunging the planet into global depression, on the other hand, is an entirely different matter.

The bloated nonstimulus and the undertaxed nominees are part of the same story. I'm with Tom Daschle: I understand why he had no desire to toss another six-figure sum into the great sucking maw of the federal Treasury. Who knows better than a senator who's voted for every tax increase to cross his desk that all this dough is entirely wasted? Tom and Tim Geithner and Charlie Rangel and all the rest are right: They can do more good with the money than the United States government can. I only wish they followed the logic of their behavior and recognized that what works for them would also work for every other citizen. Instead, they insist that the sole solution to our woes is a record-setting wasteful government spending spree.

Maybe it's time for President Obama to come out and give one of his big hopey-changey speeches. It's been a few weeks now, and I kinda miss them. You know – "We are the change we've been waiting for." "We have nothing to hope for but hope itself." "Ask not what your hope can change for you, ask what you can hope for your change." Etc.

But I wonder if the old songs from last month's hit parade would play as well today. On Wednesday, Salon headlined a story on Obama: "The New Great Communicator … Isn't." Oh, dear. It's early days yet, but the gulf between the rhetoric and the reality, between the audacity of hope and the reality of pork, yawns ever wider. Right now, it's the Obama mythology that urgently needs some stimulus. Some of us never expected him to walk on water. But we didn't think he'd be all at sea taking on quite so much of it after a mere two weeks.

Obama mythology could use some stimulus!
Far from walking on water, the president seems all at sea.