TIM TEBOW, YOU WERE ALMOST ABORTED FROM YOUR MOTHER'S WOMB. WE THANK GOD, WITH YOU, THAT YOUR MOTHER WAS SO STRONG IN HER FAITH.

Pam knows about the pain of considering abortion. More than 21 years ago, she and her husband, Bob, were serving as missionaries to the Philippines and praying for a fifth child. Pam contracted amoebic dysentery, an infection of the intestine caused by a parasite found in a contaminated food or drink. She entered into a coma and was treated with strong antibiotics before they discovered she was pregnant. Doctors urged her to abort the baby for her own safety and told her that the medicines had caused irreversible damage to her baby. She refused the abortion and cited her Christian faith as the reason for her hope that her son would be born without the devastating disabilities physicians predicted. The doctors "didn't think of it as a life, they thought of it as a mass of fetal tissue," Pam said.

While pregnant, Pam nearly lost their baby four times but refused to consider abortion. She recalled making a pledge to God with her husband, "If you will give us a son, we'll name him 'Timothy,' and we'll make him a preacher."

Pam ultimately spent the last two months of her pregnancy in bed and, eventually, gave birth to a health baby boy August 14, 1987. Pam's youngest son is indeed a preacher. He preaches in prisons, makes hospital visits, and serves with his father's ministry in the Philippines . He also plays football. Pam's son is Tim Tebow. Last year, the University of Florida 's star quarterback, became the first sophomore in history to win college football's highest award, the Heisman Trophy.

Tim's notoriety and the family's inspiring story have given Pam numerous opportunities to speak on behalf of women's centers across the country. She was the keynote speaker at the Oct. 23, 2008, benefit banquet for two Louisville ministries. A Woman's Choice Resource Center offers such services as free pregnancy tests, post-abortion counseling, adoption information, and material support. Necole's Place is a companion ministry that provides support services for women in need. Several Louisville-area Kentucky Baptist churches and Long Run Baptist Association help support both ministries. A Woman's Choice board chairman, John Schmitt, reported at the banquet that in the 20 years since the resource center opened, 4,500 children have been saved from abortion -- 400 in this year alone. Speaking of the thousands of lives saved, Pam Tebow said, "That just blows my mind. Every little baby you save matters." 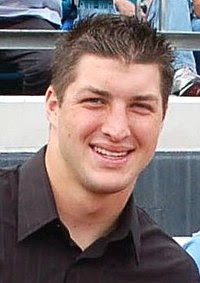 Tebow was born on August 14, 1987 in the Philippines to Bob and Pam Tebow, who were serving as Christian missionaries at the time.[1] While pregnant Pam suffered a life-threatening infection with a pathogenic amoeba. Because of extremely strong drugs used to bring her out of a coma and to relieve her dysentery, the fetus had experienced a severe placental abruption. Expecting a stillbirth, doctors recommended an abortion to protect her own life.[1] She carried the baby to term, and both mother and child survived.

All of the Tebow children were homeschooled by their mother, who worked to instill the family’s deep Christian beliefs along the way.[7] In 1996, legislation was passed in Florida allowing homeschooled students to compete in local high school sporting events. The law specifies that homeschooled students may participate on the team of the local school in the school district in which they live.[8] The Tebows lived in Jacksonville, Florida, and Tim played linebacker and tight end at the local Trinity Christian Academy for one season. Tebow's preferred position was quarterback, but Trinity football team's offense did not rely on passing the football, so he began to explore his options to play for a new high school.[9] He decided to attend Nease High School, which under head coach Craig Howard was known for having a passing offense. With the rest of his family living on a farm in Duval County, Tim and his mother moved into an apartment in nearby St. Johns County, making him eligible to play for the football team at Nease. His performance soon began to turn some heads, and led to a minor controversy over him being a homeschooled student that chose for which school he wanted to play.[10]

As a junior at Nease, Tebow’s stock rose as he became a major college football quarterback prospect and was named the state of Florida's Player of the Year.[11] He would repeat as Player of the Year in his senior season.[11] One of his highlights as a high school athlete was finishing a game on a broken leg.[12] During his senior season he led the Nease Panthers to a state title, earned All-State honors, was named Florida's Mr. Football and a Parade All-American.[13] Tebow finished his high school career with 9,810 passing yards, 3,186 rushing yards, 95 passing touchdowns and 62 rushing touchdowns. He played in the U.S. Army All-American Bowl Game in San Antonio, Texas which features the top 78 senior high school football players in the nation and is shown nationally on NBC television.[14]

Tebow was considered one of the nation’s top recruits and was the subject of an ESPN “Faces in Sports” documentary. The segment was titled "Tim Tebow: The Chosen One", and focused on Tim’s homeschool controversy and missionary work in the Philippines, as well as his exploits on the field of play and the college recruiting process.[15] Tim Tebow was also featured in Sports Illustrated on the “Faces in the Crowd” page.[16] In 2007 he was named to FHSAA's All-Century Team that listed the Top 33 football players in the state of Florida's 100 year history of high school football. [17]

Despite having family ties to the University of Florida, where his parents first met as students[18], he remained open-minded during the recruiting process and became very close to Alabama coach Mike Shula.[19] After careful consideration he decided to play for Urban Meyer's Florida Gators. One of the reasons he chose Florida was because of Meyer's spread option offense, an offense for which Tebow was deemed a prototypical quarterback.[20]

Tebow spent the last three summers before enrolling at the University of Florida in the Philippines, assisting with his father's orphanage and missionary work.[21]