BRITNEY SPEARS AND ADOLPH HITLER - TWO PEAS IN A POD 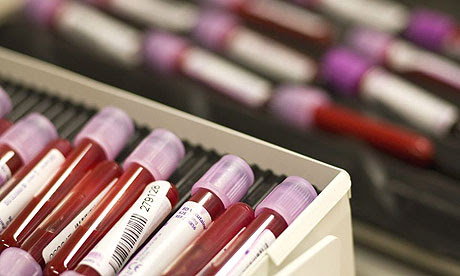 Failed yet another job interview? Unable to meet the right man or woman? Don't blame your parents. Or society. The source of your suffering is your blood type.

The idea that blood type defines our personality, temperament and ability to mingle is routinely dismissed as nonsense, but that has not stopped four books on the subject from occupying Japan's top 10 bestseller list for the past year.

Instruction Manual for People with Type B Blood and follow-up titles - which offer life-changing tips on everything from career moves to romance for types A, O and AB - have together sold 5m copies so far this year, the book's distributor Tohan said yesterday.

Blood types are cited as a factor in any thing from a colleague's quick temper to an inability to secure a coveted job or the affections of a prospective lover.

Blood typology has filled countless pages and a large chunk of television airtime since journalist Masahiko Nomi wrote the first of 30 hugely popular books on the subject in the early 1970s.

Daytime TV shows offer "blood horoscopes", while on sale are all manner of items supposedly tailored to each of the four blood groups, anything from chewing gum to condoms to bath salts - a relaxing, blue concoction for the sensitive type A.

Companies have been known to appoint employees to jobs based on their blood type, while dating agencies rank this genetic nugget alongside education and salary in recommending a male suitor.

Blood type-mania has a darker side. It has been blamed for bullying among kindergarten children, denying jobs to otherwise ideal candidates and ending happy relationships, all because of an imagined haematic mismatch.

Some experts explain blood typology's central place in the Japanese psyche by pointing to the rough similarity between the distribution of blood types and social classes in feudal Japan: the strong-willed samurai (O) and mild-mannered farmers (A), and smaller numbers of sensitive artisans (AB) and earthy tradesmen (B).

But Tatsuya Sato, an associate professor of psychology at Ritsumeikan University in Kyoto, dismissed the blood type-as-personality theory as "superstition".

"Even though psychologists and scientists have denied the relationship between blood type and personality, many Japanese are still naive about the connection," he told the Guardian.

"The name of the bestselling book is instructive, as it's touted as an instruction manual. Many Japanese adults have lost their knowledge of self, so they need books to tell them how to behave," says Sato.

From A to AB

Type A Reserved and prone to worry, sensitive perfectionists such as Britney Spears and Adolf Hitler.

Type O Decisive, self-confident, curious, and ideal for sport, including Elvis Presley and the Queen.

Type B Cheerful caring, flamboyant free-thinkers such as Jack Nicholson.