TRIG PAXSON VAN PALIN - A WINNER OF THE 2008 ELECTION CAMPAIGN 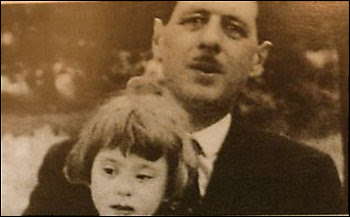 Charles de Gaulle with his daughter Anne, who had Down syndrome. (Courtesy Of The Anne De Gaulle Foundation)

In addition to Barack Obama making history as the first African American to be nominated for president and Sarah Palin taking her shotgun to the glass ceiling, there was a third civil rights barrier broken at the political conventions this year.

Trig Paxson Van Palin -- pronounced by his mother "beautiful" and "perfect" and applauded at center stage of the Republican convention -- smashed the chromosomal barrier. And it was all the more moving for the innocence and indifference of this 4-month-old civil rights leader.

It was not always this way. John F. Kennedy's younger sister Rosemary, who was born in 1918, had a mental disability that was treated as a family secret. For decades Rosemary was hidden as a "childhood victim of spinal meningitis." Joseph Kennedy subjected his daughter to a destructive lobotomy when she was 23. It was the remarkable Eunice Kennedy Shriver who talked openly of her sister's condition in 1962 and went on to found the Special Olympics as a summer camp in her back yard -- part of a great social movement of compassion and inclusion.

Trig's moment in the spotlight is a milestone of that movement. But it comes at a paradoxical time. Unlike what is accorded African Americans and women, civil rights protections for people with Down syndrome have rapidly eroded over the past few decades. Of the cases of Down syndrome diagnosed by prenatal testing each year, about 90 percent are eliminated by abortion. Last year the American College of Obstetricians and Gynecologists recommended universal, early testing for Down syndrome -- not just for older pregnant women. Some expect this increased screening to reduce the number of Down syndrome births to something far lower than the 5,500 we see today, perhaps to fewer than 1,000.
ad_icon

The wrenching diagnosis of 47 chromosomes must seem to parents like the end of a dream instead of the beginning of a life. But children born with Down syndrome -- who learn slowly but love deeply -- are generally not experienced by their parents as a curse but as a complex blessing. And when allowed to survive, men and women with an extra chromosome experience themselves as people with abilities, limits and rights. Yet when Down syndrome is detected through testing, many parents report that genetic counselors and physicians emphasize the difficulties of raising a child with a disability and urge abortion.

This is properly called eugenic abortion -- the ending of "imperfect" lives to remove the social, economic and emotional costs of their existence. And this practice cannot be separated from the broader social treatment of people who have disabilities. By eliminating less perfect humans, deformity and disability become more pronounced and less acceptable. Those who escape the net of screening are often viewed as mistakes or burdens. A tragic choice becomes a presumption -- "Didn't you get an amnio?" -- and then a prejudice. And this feeds a social Darwinism in which the stronger are regarded as better, the dependent are viewed as less valuable, and the weak must occasionally be culled.

The protest against these trends has come in interesting forms. Last year pro-choice Sen. Edward Kennedy joined with pro-life Sen. Sam Brownback to propose a bill that would have required medical professionals to tell expectant parents that genetic tests are sometimes inaccurate and to give them up-to-date information on the quality of life that people with Down syndrome can enjoy. The bill did not pass, but it was a principled gesture from Rosemary's brother.

Yet the pro-choice radicalism held by Kennedy and many others -- the absolute elevation of individual autonomy over the rights of the weak -- has enabled the new eugenics. It has also created a moral conflict at the heart of the Democratic Party. If traditional Democratic ideology means anything, it is the assertion that America is a single moral community that includes everyone. How can this vision possibly be reconciled with the elimination of children with Down syndrome from American society? Are pro-choice Democrats really comfortable with this choice?

The family struggles of political leaders can be morally instructive. Contrast the attitude of Joseph Kennedy with that of Charles de Gaulle, who treated his daughter Anne, born with Down syndrome in 1928, with great affection. The image of this arrogant officer rocking Anne in his arms at night speaks across the years. After her death and burial at age 20, de Gaulle turned to his wife and said, "Come. Now she is like the others."

And now we have met Trig, who is just like the others, in every way that matters.