OBAMA IS WRONG AGAIN, THE UNITED STATES HAS NEVER BEEN AN ENEMY OF ISLAM, RATHER SOME MEMBERS OF ISLAM HAVE BEEN THE ENEMIES OF THE US 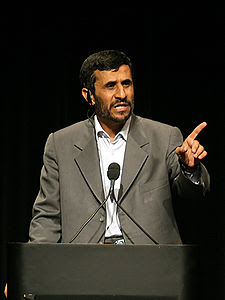 Every new president flatters himself that he, kinder and gentler, is beginning the world anew. Yet, when Barack Obama in his inaugural address reached out to Muslims by saying "to the Muslim world, we seek a new way forward, based on mutual interest and mutual respect," his formulation was needlessly defensive and apologetic.

Is it "new" to acknowledge Muslim interests and show respect to the Muslim world? Obama doesn't just think so, he said so again to millions in his al-Arabiya interview, insisting on the need to "restore" the "same respect and partnership that America had with the Muslim world as recently as 20 or 30 years ago."

Astonishing. In these most recent 20 years -- the alleged winter of our disrespect of the Islamic world -- America did not just respect Muslims, it bled for them. It engaged in five military campaigns, every one of which involved -- and resulted in -- the liberation of a Muslim people: Bosnia, Kosovo, Kuwait, Afghanistan and Iraq.

The two Balkan interventions -- as well as the failed 1992-93 Somalia intervention to feed starving African Muslims (43 Americans were killed) -- were humanitarian exercises of the highest order, there being no significant U.S. strategic interest at stake. In these 20 years, this nation has done more for suffering and oppressed Muslims than any nation, Muslim or non-Muslim, anywhere on Earth. Why are we apologizing?
ad_icon

And what of that happy U.S.-Muslim relationship that Obama imagines existed "as recently as 20 or 30 years ago" that he has now come to restore? Thirty years ago, 1979, saw the greatest U.S.-Muslim rupture in our 233-year history: Iran's radical Islamic revolution, the seizure of the U.S. Embassy, the 14 months of America held hostage.

Which came just a few years after the Arab oil embargo that sent the United States into a long and punishing recession. Which, in turn, was preceded by the kidnapping and cold-blooded execution by Arab terrorists of the U.S. ambassador in Sudan and his chargé d'affaires.

This is to say nothing of the Marine barracks massacre of 1983, and the innumerable attacks on U.S. embassies and installations around the world during what Obama now characterizes as the halcyon days of U.S.-Islamic relations.

Look. If Barack Obama wants to say, as he said to al-Arabiya, I have Muslim roots, Muslim family members, have lived in a Muslim country -- implying a special affinity that uniquely positions him to establish good relations -- that's fine. But it is both false and deeply injurious to this country to draw a historical line dividing America under Obama from a benighted past when Islam was supposedly disrespected and demonized.

As in Obama's grand admonition: "We cannot paint with a broad brush a faith as a consequence of the violence that is done in that faith's name." Have "we" been doing that, smearing Islam because of a small minority? George W. Bush went to the Islamic Center in Washington six days after the Sept. 11 attacks, when the fires of Ground Zero were still smoldering, to declare "Islam is peace," to extend fellowship and friendship to Muslims, to insist that Americans treat them with respect and generosity of spirit.

And America listened. In these seven years since Sept. 11 -- seven years during which thousands of Muslims rioted all over the world (resulting in the death of more than 100) to avenge a bunch of cartoons -- there's not been a single anti-Muslim riot in the United States to avenge the massacre of 3,000 innocents. On the contrary. In its aftermath, we elected our first Muslim member of Congress and our first president of Muslim parentage.

"My job," says Obama, "is to communicate to the American people that the Muslim world is filled with extraordinary people who simply want to live their lives and see their children live better lives." That's his job? Do the American people think otherwise? Does he think he is bravely breaking new ground? George Bush, Condoleezza Rice and countless other leaders offered myriad expressions of that same universalist sentiment.

Every president has the right to portray himself as ushering in a new era of this or that. Obama wants to pursue new ties with Muslim nations, drawing on his own identity and associations. Good. But when his self-inflation as redeemer of U.S.-Muslim relations leads him to suggest that pre-Obama America was disrespectful or insensitive or uncaring of Muslims, he is engaging not just in fiction but in gratuitous disparagement of the country he is now privileged to lead.

Iran has already responded to the Obama overture. In perfect tune with Obama's defensiveness, President Mahmoud Ahmadinejad declared that better relations might be possible -- after America apologized for 60 years of crimes against Iran. Note the 60 years. The mullahs are as mystified by Obama's pre-1979 (or 1989) good old days as I am.