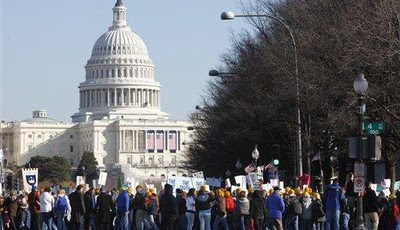 With the Capitol in the background, abortion opponents march to the Supreme Court in Washington, Thursday, Jan. 22, 2009, to mark the 36th anniversary of the Roe v. Wade march for Life. (AP Photo/Jacquelyn Martin)


Sometimes, change can make you choke.

That's been the experience of many supporters of the Mexico City Policy, recently rescinded by President Barack Obama (the second Democratic president in MCP's 25-year history to do so). The Reagan-era mandate, derisively referred to by its critics as the Global Gag Rule, prevented America from officially exporting its liberal abortion policies overseas. It did this in the most practical way possible, by refusing federal U.S. dollars to pro-abortion groups operating in foreign countries. The United States spends upwards of $400 million on family-planning assistance annually in 53 developing nations, much of the money going to nongovernmental organizations (NGO) based in-country. Thanks to the MCP, not 1 cent went toward the anti-life cause.

Named for the location of the 1984 U.N. population conference that formulated the policy, it stated: "Governments are urged ... to take appropriate steps to help women avoid abortion, which in no case should be promoted as a method of family planning, and whenever possible, provide for the humane treatment and counseling of women who have had recourse to abortion."

The policy presented overseas health organizations with a choice: They could accept federal American cash and discourage abortion or they could refuse the needed funds and do as they wished. That's surely far from draconian. NGOs that opted out of the Yankee bucks were still free to solicit donations from sympathetic private citizens and institutions. And, contrary to a lot of what I've been reading in the press lately, the policy had little to do with abstinence education, and certainly nothing to do with jailing or hurting women.

In short, the debate over the Mexico City Policy doesn't have to be a zero-sum affair. As Republican Chris Smith, the most ardent anti-abortion advocate in Congress, put it shortly after Obama issued an executive order overturning the policy: "The Mexico City Policy represents common ground." In fact, Democrat Bart Stupak joined Smith in an attempt to reinstate the policy.

But in order to make real progress, honesty must be introduced to the debate, after a long absence from the proceedings. Take the case of Min Min Lama. In 1997, a relative raped this 14-year-old Nepalese girl. She became pregnant and was unknowingly given an abortion drug by a family member. When the expelled fetus was found dead, she was sentenced to 12 years in jail, as abortion was still illegal in Nepal at that time.

There's nothing good about the story. But then another bad chapter was written on Capitol Hill. Democratic Sen. Barbara Boxer has long used Lama's harrowing ordeal as an example of the harm the Mexico City Policy could do. In Boxer's telling of the tale, when a group called the Family Planning Association of Nepal advocated for Lama's release, America used the Mexico City Policy to punish FPAN. In one speech, the California senator said, "The Global Gag Rule put us on the side of a rapist. We are not on the side of human rights... We are on the side of people who are evil."

Boxer's contentions beg to be challenged. Lama's rape, abortion, imprisonment and release from jail all happened during years when the Mexico City Policy was not in effect. From 1993 to 2001, the Clinton administration rescinded the MCP, making Boxer's story nothing but shameful propaganda.

Further, FPAN is an affiliate of the International Planned Parenthood Federation, an organization that has long advocated for the liberalization of Nepal's abortion laws. And when the Mexico City Policy was actually reinstated under President Bush in 2001, FPAN opted to refuse federal money, instead relying on substantial donations and funding from its IPPF mothership so it could continue it's pro-abortion activities.

In the case of Min Min Lama, international outrage ultimately resulted in her pardon and release in 1999, three years before abortion was legalized in Nepal.

I happen to believe abortion is a human rights issue -- that it is a gross violation of our duty to protect life at its most vulnerable. But you don't have to agree with me to see there has been something wrong with how we're thinking about the MCP issue. The Mexico City Policy doesn't deserve its bad rep. I look forward to the day where it isn't treated as the ball in a partisan ping-pong game and we can have an honest debate about it.

About The Author Kathryn Jean Lopez, editor of National Review Online, writes a weekly column of conservative political and social commentary for Newspaper Enterprise Association.
Posted by Leo Rugiens at 7:31 AM