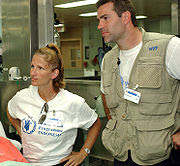 
The story of the marriage of Kurt and Brenda is truly inspirational.

They met in 1992 at a country bar while he was Norther Iowa's starting quarterback. After being cut by the Green Bay Packers in 1994, Kurt found employment in a grocery store, he stocked shelves at a Hy-Vee in Cedar Falls for $5.50 an hour. After meeting Brenda at the bar, the next morning Kurt brought Brenda roses and wanted to meet her children. She had told Kurt about her children the night before so there was no dramatic surprise when she introduced her disabled son.

The Warners' was a lengthy courtship. They married in 1997 after having met in 1992.

Zachary Warner, born in 1989, has serious physical infirmities. He was born a perfectly healthy infant. When he was four months old, his father dropped him, and in the blink of an eye, this previously healthy baby was suddenly clinging to life, his grip slipping fast. He suffered severe brain damage, and both his retinas were ruptured. At the time few thought that Zachary would live, and fewer still held out any hope that he would ever see, sit up, read, or talk. Truly his condition was worse than that of a child born with Down Syndrome.

Zachary's recovery has been long and arduous, but he now walks and talks. Though still legally blind, he can make out colors and shapes. No longer strictly a special-needs student, he is integrated for half-days in a regular school classroom.

Kurt adopted Zachary and Jesse after his wedding to Brenda in 1997. The Warners have since added five more children to their family. As for what sort of lad Zachary is and what kind of relationship he enjoys with his adoptive father, this anecdote should say it all: after the Rams victory in the NFC Championship game in 2000, 10-year-old Zachary presented Kurt with a homemade card done in Rams blue and gold. Inside, in childlike scrawl, it read: "You're as good a dad as you are a quarterback."

Zachary's birth dad could hardly be described in similar fashion. An inability to come to terms with the injuries he had visited upon his son led to the breakup of his marriage to Brenda. He left her when she was eight months pregnant with Jesse.

This beautiful story was passed on to me by Governor Rick Perry, who informs me that he intends to root for the Cardinals in the 2009 Super Bowl. I can understand why; this is an amazing human interest story. It sort of reminds me of the heroic decision of Sarah Palin and her husband to give birth to and raise their Down Syndrome son, Trig. Sarah Palin took a lot of abuse during the 2008 campaign and the left-liberals who are so strongly pro-abortion continue to vilify her in the electronic and print media. I suspect that a lot of her hatred is directed against her because of her strong pro-life beliefs, and just as was noted in the preceeding post, anyone who is pro-life is suspected of being pro-life because of religious beliefs and therefore is the object of scorn, hatred and derision.


I wonder how many people who know the story of Kurt Warner as the loving Christian father of seven children will root for the Philadelphia Eagles because Kurt Warner is a man who represents a lot that they despise?