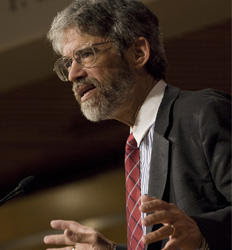 IN NOMINATING John Holdren to be director of the Office of Science and Technology Policy -- the position known informally as White House science adviser -- President-elect Barack Obama has enlisted an undisputed Big Name among academic environmentalists, one "with a resume longer than your arm," as Newsweek's Sharon Begley exulted when the announcement was made. Holdren is a physicist, a professor of environmental policy at Harvard, a former president of the American Association for the Advancement of Science, the director of the Woods Hole Research Center, and the author or co-author of many papers and books.

He is also a doom-and-gloomer with a trail of erroneous apocalyptic forecasts dating back nearly 40 years -- and a decided lack of tolerance for environmental opinions that conflict with his.

The position of science adviser requires Senate confirmation. Holdren's nomination is likely to sail through, but conscientious senators might wish to ask him some questions. Here are eight:

1. You were long associated with population alarmist Paul Ehrlich, and joined him in predicting disasters that never came to pass. For example, you and Ehrlich wrote in 1969: "It cannot be emphasized enough that if . . . population control measures are not initiated immediately and effectively, all the technology man can bring to bear will not fend off the misery to come." In 1971, the two of you were adamant that "some form of ecocatastrophe, if not thermonuclear war, seems almost certain to overtake us before the end of the century." In the 1980s, Ehrlich quoted your expectation that "carbon dioxide-induced famines could kill as many as a billion people before the year 2020." What have you learned from the failure of these prophecies to come true?

2. You have advocated the "long-term desirability of zero population growth" for the United States. In 1973, you pronounced the US population of 210 million as "too many" and warned that "280 million in 2040 is likely to be much too many." The US population today is 304 million. Are there too many Americans?

3. You opposed the Reagan administration's military buildup in the 1980s for fear it might "increase the belligerency of the Soviet government." You pooh-poohed any notion that "the strain of an accelerated arms race will do more damage to the Soviet economy than to our own," or that "damaging the Soviet economy would benefit the US." But that is exactly what happened, and President Reagan's defense buildup helped win the Cold War. Did that outcome alter your thinking on military questions?

4. You argued that "a massive campaign must be launched ... to de-develop the United States" in order to conserve energy; you also recommended the "de-development" of modern industrialized nations in order to facilitate growth in underdeveloped countries. Yet elsewhere you observed: "Affordable energy in ample quantities is the lifeblood of the industrial societies and a prerequisite for the economic development of the others." Which is it?

5. In Scientific American, you recently wrote: "The ongoing disruption of the Earth's climate by man-made greenhouse gases is already well beyond dangerous and is careening toward completely unmanageable." An interview you gave to the Bulletin of the Atomic Scientists was headlined “The Sky Is Falling.” Given your record with forecasting calamity, shouldn't policymakers view your alarm with a degree of skepticism?

6. In 2006, according to the London Times, you suggested that global sea levels could rise 13 feet by the end of this century. But the latest assessment from the Intergovernmental Panel on Climate Change is that sea levels are likely to have risen only 13 inches by 2100. Can you explain the discrepancy between your estimate and the IPCC’s?

7. "Variability has been the hallmark of climate over the millennia," you wrote in 1977. "The one statement about future climate that can be made with complete assurance is that it will be variable." If true, should we not be wary of ascribing too much importance to human influence on climate change?

8. You are withering in your contempt for researchers who are unconvinced that human activity is responsible for global warming, or that global warming is an onrushing disaster. You have written that such ideas are "dangerous," that those who hold them "infest" the public discourse, and that paying any attention to their views is "a menace." You contributed to a published assault on Bjorn Lomborg's notable 2001 book "The Skeptical Environmentalist" -- an attack the Economist described as "strong on contempt and sneering, but weak on substance." In light of President-elect Obama's insistence that "promoting science" means "protecting free and open inquiry," will you work to soften your hostility toward scholars who disagree with you?