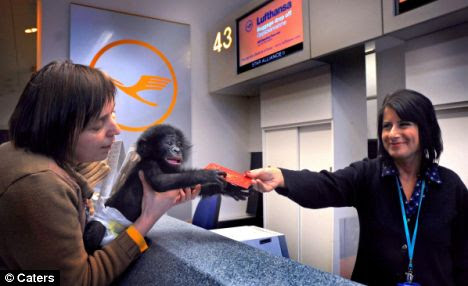 Three-month-old bonobo Bili checks in at Birmingham Airport with his keeper as he heads to Frankfurt to meet his new mother.

Judge Robert Bork had it right when he titled his book,
SLOUCHING TOWARD GOMORRAH.
However, it would seem that we are not slouching, but rather
are rushing into the pit of hell.
It was bad enough when women were aborting their babies
because the baby was the wrong sex.
But now, unfaithful wives are having their child in the
womb dna tested to see if the child was fathered by
their lover or by their husband. If it was fathered by the
lover the women will abort the child in order to avoid
any problem with her husband.
Truly, we are rushing into hell.

(the photo above was not chosen to suggest
bestiality, it was chosen simply to press
home the horror of what is described here)

PATERNITY tests are being carried out by DNA laboratories on children while they are still in the womb, enabling their mothers to abort them if they are the product of an extramarital affair.

The service, known as a prenatal paternity test, is being used by hundreds of British women every year, according to one of the laboratories performing it.

Most of the women opting for it have had affairs and are anxious to know whether the child they are carrying was fathered by their partner or their illicit lover.

Some DNA laboratories are refusing to perform the prenatal paternity test, insisting that it is unethical - a view echoed by anti-abortion campaign groups. Invasive procedures are necessary for testing, raising the risk of a miscarriage and health problems for the mother.

It is the latest ethical difficulty to hit the burgeoning business of private DNA testing. At least 20,000 tests are believed to be carried out each year in Britain.

Academic research shows many fathers are right to wonder about their children's provenance: one in 25 unwittingly raises another man's offspring.

One company, DNA Solutions, acknowledges that some of the women using its prenatal test - which costs at least £234 ($494) - will probably go on to have terminations if the baby is shown to have the "wrong" father.

Marketing director Dan Leigh said the company was performing up to 500 prenatal paternity tests in Britain each year.

The practice was even more prevalent in the US, he said. There had been "a few cases in the US that had resulted in abortion", though not necessarily involving DNA Solutions.

Mr Leigh conceded that if a woman took a test and it showed that her unborn child was not her husband's, she might want an abortion to conceal her infidelity.

Under British law, DNA tests can be carried out only if the person whose cells are being scrutinised has given written permission. "If she had an affair with someone and she was pregnant and she went for a prenatal test, she could ask the guy she had the affair with and then compare the result with his profile," Mr Leigh said.

To extract a usable sample for testing, the pregnant woman must undergo either chorionic villus sampling, which is carried out between the 11th and 18th week of gestation, or, as is more commonly the case, amniocentesis, which is done slightly later.

Mr Leigh defended the service: "I think the truth should be out there. If you are raising a family, as a father you have every right to know."